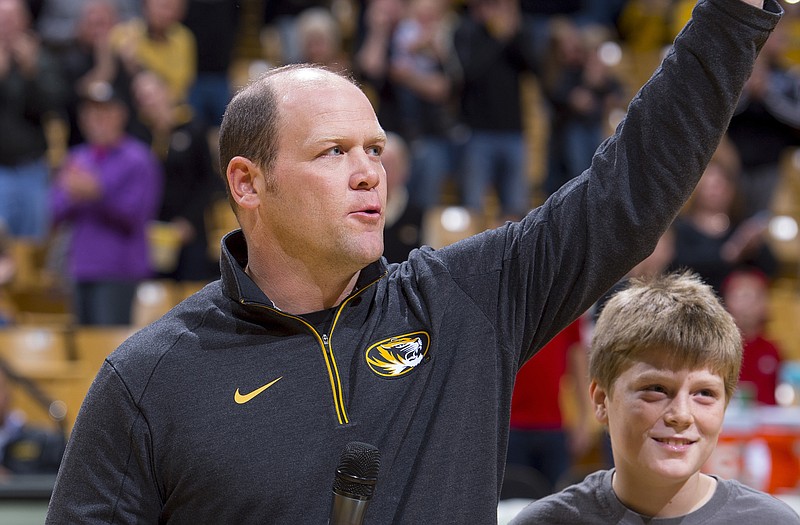 The pieces of Barry Odom's staff are beginning to fall into place.

The newly-hired Missouri coach made his first addition to the staff Thursday when the school hired Josh Heupel as its offensive coordinator and quarterbacks coach. Heupel currently holds the same positions at Utah State, and he will join the Tigers after the Aggies play Tuesday in the Idaho Potato Bowl.

"I'm really pleased to have someone the caliber of Josh Heupel join our staff," Odom said in a release. "I've known him for a long time and have always respected him highly as a player, a coach, a recruiter and a coordinator. I've been impressed by the offenses that he runs - they're very difficult to defend - and his achievements speak for themselves.

"He's a high-character person who has the type of leadership abilities that will be outstanding for our program, and he's exactly what we're looking for. We're excited to have him on board."

This season is Heupel's first at Utah State, where he is also an assistant head coach. He previously coached at Oklahoma, his alma mater, from 2011-14 as a co-offensive coordinator, from 2006-14 as quarterbacks coach, and in 2004 as a graduate assistant. He was also the tight ends coach at Arizona in 2005.

"I am very grateful to coach Odom for this opportunity," said Heupel, 37. "First and foremost, I believe in the person Barry Odom is and what he stands for. I believe in the vision that he has for this program. I have a lot of respect for Mizzou and the football program, as someone who's seen it from an outsider's perspective for a long time.

"I believe this is a special place that has just scratched the surface of what it can be, and it's a program that is capable of winning championships on a consistent basis. I want to be part of that. I think it's a great time to be at Mizzou, and I'm excited to get there and to go to work."

Kent Myers and Chuckie Keeton split the quarterbacking duties this season for the Aggies. Myers completed 107-of-179 passes (59.8 percent) for 1,470 yards and 13 touchdowns with three interceptions. Keeton threw for 892 yards on 90-of-174 passing (51.7 percent) with three touchdowns and six interceptions. Keeton and Myers split time due to injuries.

Receiver Hunter Sharp hauled in 746 yards this season, fourth in the Mountain West.

When Heupel was an assistant at Oklahoma, the Sooners played in three national championship games and started Heisman Trophy-winning quarterback Sam Bradford and Landry Jones, who won the 2010 Sammy Baugh Award as the nation's top passer.

As a player, Heupel led Oklahoma to the BCS National Championship in 2000, finishing as the Heisman runner-up to Chris Weinke. He threw for 3,606 yards with a 64.6 completion percentage that season, having thrown for 3,460 yards with a 62 completion percentage the year before. A South Dakota native, he played at Weber State and Snow College prior to Oklahoma. After college, he was a member of the Miami Dolphins' and Green Bay Packers' offseason rosters.

Heupel replaces Josh Henson, who served as Missouri's offensive coordinator from 2013-15. The Tigers had one of the worst offenses in the country under Henson in 2015, averaging 13.6 points per game (second-worst nationally) and 280.9 yards (fourth-worst).

Missouri's offense will return quarterback Drew Lock and all but one receiver, but the Tigers will lose five seniors on the offensive line and senior tailback Russell Hansbrough, who ran for 1,000 yards in 2014.

More changes came to the Missouri staff Thursday when Football Scoop reported Missouri strength and conditioning coach Pat Ivey would not be returning to the team.

Missouri snagged one of its biggest signees of the offseason Wednesday when Odom announced 6-foot-8, 300-pound offensive lineman Tyler Howell signed a letter of intent to play at Missouri.

Howell, an Olathe, Kan. native, played most recently at Butler Community College in 2014. Missouri signed him in February but he was not cleared academically to play in the fall.

Butler went 8-3 in 2014 behind an offense that gained more than 5,000 yards. Howell also had offers from Arizona State, Arkansas, Georgia, Kansas, Kentucky and Penn State, among others.

Beckner, a defensive tackle, finished the year with 27 tackles, eight tackles for loss and three sacks.

Brady, a defensive end, recorded seven sacks, most in the nation by a freshman. He also had 12.5 tackles for loss, more than any freshman in the SEC.

Fatony set a Missouri record this year with 81 punts and finished with a net average of 42.9 yards per punt, best in the nation among freshmen.