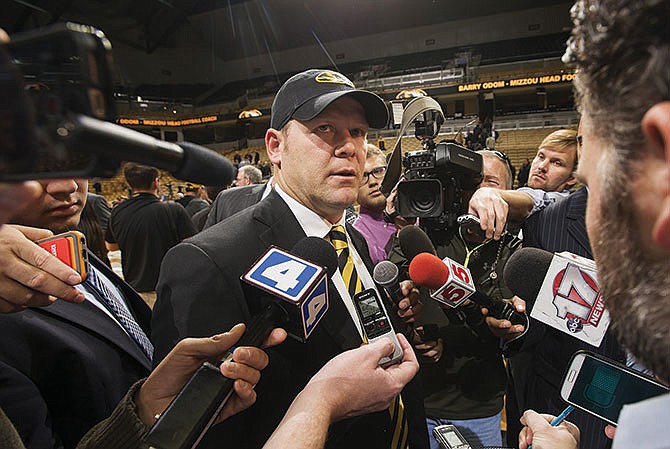 COLUMBIA, Mo. - Anxious Missouri football fans wanted nothing more last week than for the Tigers to hurry up and name a new head coach already.

They weren't the only ones.

When director of athletics Mack Rhoades met with Barry Odom, the eventual hire, for a second time last week, Odom began to get frustrated with the drawn-out process.

"We intentionally tried to wear him out," Rhoades said Friday at Odom's introductory press conference. "And he's smiling, because we tried, and he even got a little ticked off about it."

"I was looking for him to get ticked off a little bit," he said. "Seriously. I think that just his fight, that competitive nature, those are all things that I think are just a few of the qualities that a head coach needs to (have)."

"It was thorough," Rhoades said. "It was detailed. It was fast-paced. It was rigorous. There were several complaints from the search committee throughout, lack of food, lack of sleep. I told them that they could do all of those things when we were finished."

Though Rhoades had to make sure not to be too thorough, either.

"Hopefully, I'm not that stubborn where you end up making a mistake or losing a candidate," he said. "But ... after that first meeting (with Odom), my heart was there. I thought, he is really really (good). And then I needed to get my mind there, and in order to do that you have to talk to other candidates."

The first candidate he met with was Odom, an intentional choice on Rhoades' part.

"We wanted to meet with coach Odom first to just see how high he set the bar," he said. "And he set the bar at a world-championship level."

The search came with its share of challenges. The market was especially tough given the quantity of high-profile openings in college football. What's more, Odom was being wooed by Memphis, where he was defensive coordinator for three years before taking the same position at Missouri earlier this year.

"I don't know quite frankly or do I care what Memphis is going to do," Rhoades said. Memphis announced Mike Norvell as its coach Friday. "I've got great respect for Memphis, and they had their own process, but (I told Odom) here's our process, and you need to know that going in."

What's more, there was some added uncertainty regarding the position because of the team's high-profile boycott this season in protest of then-system president Tim Wolfe.

Rhoades said the protest, which was spurred by racist incidents on campus and supported by Pinkel, played no role in the search. However, Rhoades said previously he expected to have to answer some questions about it, an expectation shared by former Missouri A.D. Mike Alden.

The team's protest ended when Wolfe resigned Nov. 9, and R. Bowen Loftin announced he would resign from his position as chancellor later that day. With president Mike Middleton and chancellor Hank Foley both sporting "interim" labels, curator Phillip Snowden assisted in helping Rhoades and chairman Donald L. Cupps with the search.

"I think in high-profile positions, you're always looking for, not just your A.D., but you're looking for where's there stability in the rest of the leadership," said Alden, who added that having interim officials during the search is "not a huge issue, but it is an issue."

Rhoades and the curators established financial parameters prior to beginning the search.

"It wasn't just one set number of years, salary, buyout, all those different things that you think about and are certainly contractual elements," Rhoades said. "We had ranges, and it was going to be dependent upon the candidate that we ultimately chose."

Odom's contract will be up for approval at the curators' meeting Dec. 10-11 in St. Louis.

The search technically took six days, though Rhoades had known since late October he would need a replacement for Pinkel, who resigned after the season for health reasons. Rhoades said he expected the search to take about as long as it did.

The hire is the first major one for Rhoades, who took over for Alden in April. A

lden, who hired Pinkel, said coaching searches are some of the most hectic weeks for athletic directors.

"The intensity and amount of emotional and physical energy that you expend during that time - well first of all, you can't calculate it," he said. "And it's almost hard to explain it unless you've experienced it. Because it's physically exhausting, it's mentally exhausting, it's emotionally exhausting, and so to be able to keep that level of focus and intensity for seven to 10 to 14 days, it can be really tough."

Alden sent Rhoades a congratulatory text Thursday night and told him to get some sleep.

Rhoades was relieved to be done with the search.

"Best of all," he said. "I'll now be able to go get a Christmas tree and put up my Christmas lights."