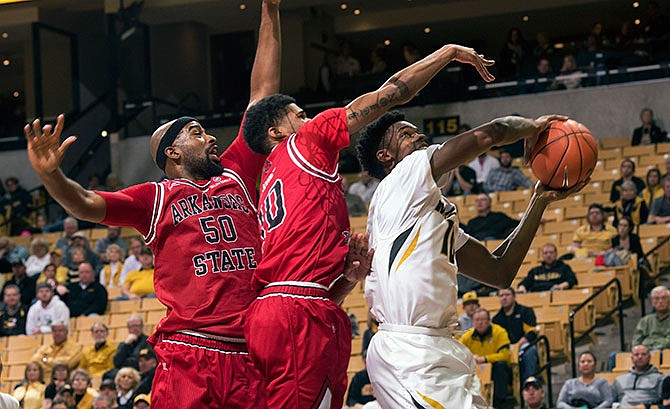 Missouri's K.J. Walton, right, pulls down a rebound past Arkansas State's Frederic Dure, center, and Anthony Livingston (50) during the first half of an NCAA college basketball game Tuesday, Dec. 1, 2015, in Columbia, Mo.

This time, though, the Tigers were the ones with the white knuckles, holding on for a 88-78 win against Arkansas State to end a three-game losing streak.

Hello from the other side.

"That thing went from 25 to 4," Missouri coach Kim Anderson said of his team's lead. "That's not good. It's not good when that happens. But I do think we learn something out of it. Every game, we've just got to learn and get better, and these younger guys have got to get older.

"They could've lost. We could've lost that game, but we had guys step up and make plays. We handled their pressure pretty good at the end. They said they weren't nervous. I was nervous."

Missouri guard Namon Wright kept Arkansas State from getting closer than 70-66 by scoring six straight points on a corner 3, the ensuing free throw and a finger roll in transition off a Terrence Phillips steal.

Wright's burst of scoring stopped a 29-8 run by the Red Wolves.

"We were the better team at that stretch," Arkansas State coach John Brady said.

Wright finished with a team-high 14 points, and shot 3-of-5 behind the arc. He said it was a result of putting in extra work after struggling to make shots the past few games.

"I had to just come in here by myself or with a manager and just shoot only 3s," Wright said. "Don't just work out, shoot only 3s, 300 makes every night. Just get a little rhythm going for yourself, and that's what helped me."

Wright was one of five players in double digits for Missouri and eight with eight or more points.

Forty-four of Missouri's points came in the paint and 38 came off the bench, compared to 26 and 13, respectively, for the Red Wolves.

The Tigers wanted to come out and land the first punch, and they did just that. Arkansas State needed 6:06 to score its first point and 13:05 to get to double digits.

Although, the Red Wolves needed just 2:02 after reaching their 10th point to get to their 20th.

After its cold start, Arkansas State finished the half making 8-of-14 shots from the field. At one point, the Red Wolves cut the Tigers' lead back to 11 in the first half with a 7-0 run capped by a Devin Carter 3-pointer.

The Tigers seized control again, however, with five straight free throws - two of which came off a technical on the Arkansas State bench - and finished the half up 19. The Tigers have never won a game by 20 points under Anderson.

Devin Carter, who led all scorers with 24, had two 3-pointers during the Red Wolves' second-half run. Frederic Dure hit one of his own at 4:54 to get within four, but Missouri scored 12 of the next 15 points.

The Tigers were coming off consecutive losses to Xavier, Kansas State and Northwestern. In the most recent, Missouri trailed 31-11 with nearly eight minutes to play in the first half and rallied within three with less than a minute in the game. But it was to no avail, as Missouri fell 67-62 to Northwestern.