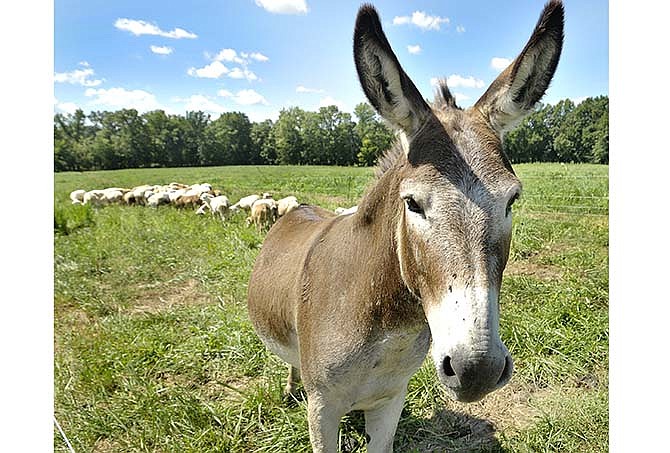 The curious Boeckman checks out visitors to assess whether they are predatory or friendly. Boeckman is one of four working donkeys at Lincoln University's Busby Farms to serve as guardians to sheep.

BRAZITO, Mo. - Ears perked high, Silver Fox kept her dark eyes fixed on the strangers entering the field where she was guarding her flock of mother sheep and their lambs.

The sand-colored donkey then moved the flock farther away and positioned herself between the grazers and the visitors.

That is typical behavior for these unusual guardians, to assess the intentions of the newcomers, said Christopher Boeckmann, organic production manager.

Silver Fox is one of five donkeys working at Lincoln University's Busby Farm.

Donk, on the other hand, is quick to check out new people, getting up close and focusing a large, brown eye straight at the subject. If he approves, then he'll rub his head on his new friend and seek some petting in return.

For those like Charlotte Clifford-Rathert, associate professor and state small ruminant extension specialist, Donk and other gregarious donkeys may lay their heads on her shoulder or give her a hefty nudge. It's how donkeys would show affection to one another, she explained.

Silver Fox, Donk and Abby came to Busby Farm just after being weaned around 2010. They each were placed in a grazing area with a herd of goats or flock of sheep.

At first, the young donkeys were skittish, finding the farthest opposite part of the area from the group of strange beasts. However, being social animals, soon they became part of the flock or herd and took on the role of guardian.

The actions are natural instinct. They've not been taught.

That's what makes donkeys the second-best guardians for grazers, Boeckmann said. The first are dogs. However, Busby Farm had ongoing problems keeping and managing dog guardians at its location fronted by U.S. 54, Goller Road and the Moreau River, Boeckmann said.

"Dogs are more popular; they blend in better with the animals," Clifford-Rathert said.

The donkeys were an experiment, which seems to be working fairly well. A few area farmers have asked about trying them on their land. However, the professors point out not all donkeys behave the same and not all situations work out.

"Donkeys are naturally herd animals ... and in the face of an intruder or predator will do whatever it takes to stop the predator," Clifford-Rathert wrote with Nancy Edgerly, of Silver Hills Farm, for a recently-released producer handbook published by Langston University. "Donkeys don't panic; they approach, investigate and stand their ground, known as a "non-predator zone instinct.'"

Because donkeys are grazers, too, they can eat what their flock or herd does - a benefit over dogs, which require their own food.

"Donkeys are a low-impact, easy solution," Boeckmann said. "And they're easier on the budget."

Clifford-Rathert added: "It's worked out well for us."

Busby Farm started with five donkeys, but one had a heart defect and lived a short, but loved, life at the farm, doing several guest appearances at fairs and children's days.

As a land-grant institution, Lincoln University specifically is charged with research focusing on small ruminant animals. Originally, Busby Farm studied swine, and it also held aquaculture studies until a few years ago.

The research there is for the public's benefit, and visitors are welcome.

The donkeys make the visits a little more interesting.

"The donkeys were a novel idea, and the public really enjoys them," Clifford-Rathert said.

Boeckman the donkey, named for his previous home at Christopher Boeckmann's farm, is a miniature breed donkey and not quite as friendly as Donk. However, he does his job keeping his sheep in line, literally. When it's time to rotate to fresh grazing space, Boeckman the donkey knows when the truck pulls in to get the sheep ready to load in the trailer.

A fourth donkey, Abby, is currently on loan to an agricultural collaboration in Elsberry. Abby's specialty is the goat nursery. When the lambs leave after being weaned, she is noticeably down for several days, Clifford-Rathert said.

Abby was actually too interested in the babies when she was younger. Clifford-Rathert said Abby's interest sometimes interfered with the ewe and lamb bonding.

Both Clifford-Rathert and Boeckmann have donkeys at their own farm operations, though not necessarily serving as guardians.

A common misperception is that donkeys are "stupid because they're stubborn," Clifford-Rathert said. "It's actually because they're intelligent. They won't do something until they're sure."

Using the donkeys as guardians has been a learning process.

However, Clifford-Rathert said, "that's what research is all about."