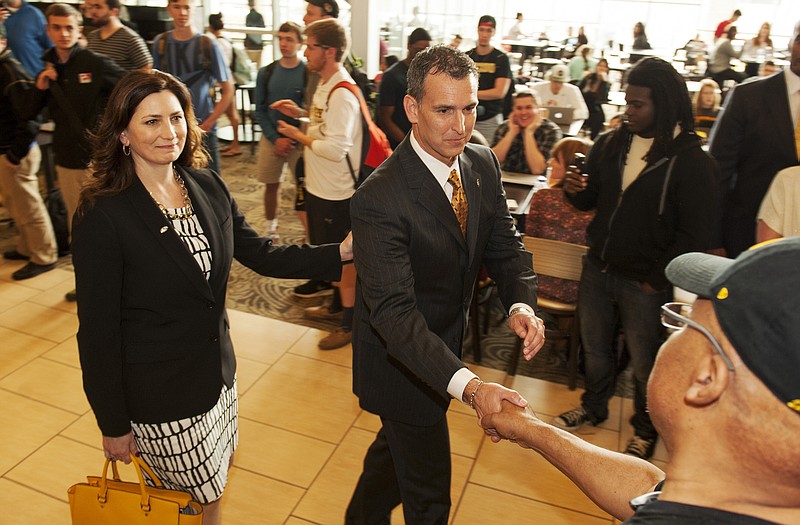 New Missouri athletic director Mack Rhoades and his wife, Amy, are greeted by supporters as he prepares to take the stage prior to his introductory press conference earlier this year in Columbia.

COLUMBIA - Spring semester might be coming to a close, but for Mack Rhoades, this week began with his first day at a new school - a feeling his wife, Amy, helped solidify.

"She actually took a picture of me as I'm leaving the townhome at 6 a.m. and texted it to my daughter," Rhoades said. "So it really did feel like the first day of school."

Though for Rhoades, his duties will be a bit more consequential than getting to class on time and remembering to pack a lunch. Rhoades made the move from Texas to take the reigns as the University of Missouri's newest director of athletics.

Rhoades, who held the same position at the University of Houston, met with media Thursday for the first time since taking over for Mike Alden, Missouri's athletic director for the past 17 years.

His initial focus is executing his 90-day plan, which includes three main stages: evaluating personnel and organizational structure, developing a five-year plan for the athletic program's facilities and building relationships on campus and beyond.

"You don't build and have a successful athletics program by yourself," Rhoades said. "We need the help of a lot of people, and it starts with those folks on campus, beginning to engage them and get to know them and make sure that they understand our vision and that we're completely in line in terms of the university's mission."

Rhoades said the position might not be structured the same way as Gillin's.

Rhoades' No. 2 at Houston, Hunter Yurachek, was announced Tuesday as Rhoades' replacement at Houston, meaning one option for Missouri's deputy athletic director is off the list.

"I had a moment here where I wasn't really happy, and I kind of lost perspective," Rhoades said of Yurachek's hiring at Houston. "(I'm) supposed to be happy for a dear friend and I wasn't, but then quickly said "You know what, things happen for a reason.'"

Rhoades said a candidate for the position will be in Columbia this weekend, and if he is satisfied, there might not be a second candidate.

The first facility undertaking on the list is the proposed renovations to the south end zone of Memorial Stadium - including a possible addition of luxury seating to boost revenue.

"But at the end of the day, we might have three things at the top of the list," Rhoades said. "I don't know yet."

Rhoades said the development is in the "discussion stage" and he met Thursday morning with football coach Gary Pinkel.

As for relationships, Rhoades said associate athletic director Tim Stedman is currently scheduling appointments with the department's top 25 donors. Rhoades also stressed the department needs to be more involved within the University of Missouri community and be more assertive in trying to increase attendance at games.

"Right now, I think we're a little bit of an inbound company, meaning that we do a really good job of taking phone calls," Rhoades said, "but we've got to get aggressive, we've got to have people on the phone and getting people excited and getting people to come out to not just football games, but all of our venues and really implement a pro model. Professional athletics does a great job in terms of selling tickets, and so we'll certainly begin to look at that."

In regard to men's basketball, where attendance numbers plummeted as the team set a record for losses in a single season, Rhoades' solution for putting people in seats was simple.

Rhoades said he has faith in first-year basketball coach Kim Anderson's ability to turn the program around.

"I never want to point a finger at anybody, but we all realize that what Kim inherited wasn't a perfect situation, and it just wasn't," Rhoades said. "I think we can all call it what it is, and that's exactly what it was. Why (that is), is No. 1. And then really 2 is, how do you attack that? How do you fix it? And what can I do to be helpful? Kim is, again, I mentioned this earlier, Kim is more than capable of getting this corrected, but I want him to know that I'm going to be in the trenches with him, sleeves rolled up, and we're going to do this together, OK?"

He couldn't say how many years he planned to give Anderson to revive the program, but he did say jokingly: "I can tell you it's not 10 years."

Rhoades doesn't have that problem with Missouri's football team. Pinkel is the program's winningest coach and was signed to a contract extension as Alden was leaving. Rhoades said he was kept in the loop during Pinkel's contract discussions, but he didn't have any say on what the terms would be.

Another coaching decision on Rhoades' plate regards baseball coach Tim Jamieson, whose contract expires after the season. Rhoades said he has not yet made a decision regarding Jamieson's future, but that he would meet with the coach the second week of May to discuss it.

Also up for discussion: renovations to the baseball team's facilities.

"I think you look at just facility alone in terms of baseball in the (Southeastern Conference), some of those ballparks look like AAA ballparks," Rhoades said. "I think that's certainly one area that we would have to address."

Chancellor R. Bowen Loftin recently expressed an interest in adding a men's tennis team, but Rhoades said that was not a priority of his.

Rhoades was also asked about the future of the Missouri-Kansas rivalry, which came to a halt when Missouri joined the SEC in 2012. Rhoades expressed willingness to re-up the tradition but was careful to say when or if it might happen.

"We would certainly like to play them again," he said. "... I've had one discussion already with (University of Kansas director of athletics Sheahon Zenger). He is a great, great person. Great director of athletics, but it's a lot more complicated than just saying, "We want to play again.' ... I think he's certainly again open to it down the road, and I think the time's got to be right for both institutions and there's got to be obviously a willing spirit for it to happen. And hopefully we can continue to develop that spirit as he and I get to know each other better."

Renewing the border rivalry could be a defining moment of Rhoades' term as Missouri's A.D., but he said he wasn't concerned with thinking about what sort of legacy he might leave.

"I'm not sitting here thinking about how can I put my stamp on the program," he said. "I'm worried about how can I come in here, be a great leader for this program, develop a staff, a team that can help take us to the next level and then work from there. You all, and the fans, will define whatever that stamp is.

"I'm not sitting here thinking about that at all. Maybe it's a facility, maybe it's a coaching hire. Who knows. All I'm worried about is that this program, it has room for growth and that we've maximized that growth."

The details of Rhoades' contract have yet to be finalized.