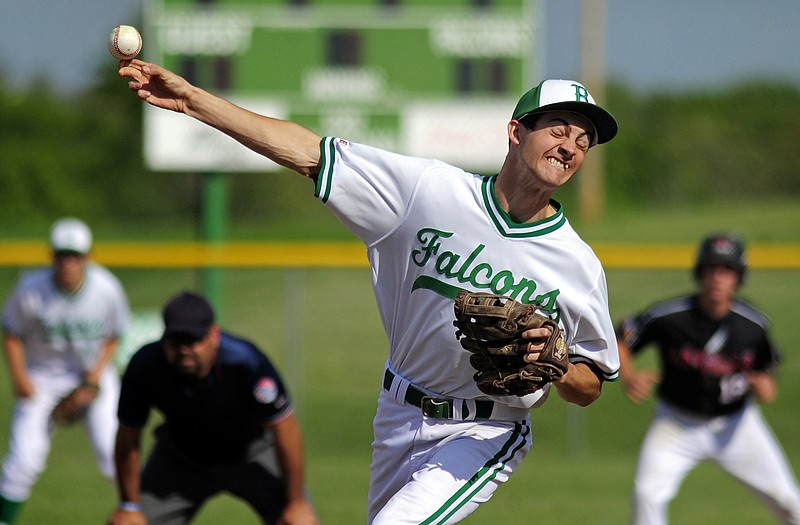 The next time, the Falcons made sure to shut the door for good, defeating Southern Boone 10-6 on Wednesday after letting a five-run lead slip away.

The Falcons burst out of the gates with five runs in the first two innings - sending 17 players to the plate before the ninth-place Eagles batter hit - but Blair Oaks ended each of the first two frames with three men on base.

"It's good to score early and put up some crooked numbers, but you worry a little bit when you leave six on over the first two innings," Falcons coach Harv Antle said. "We left them loaded there, and while we scored a handful of runs, it could've been a lot more and we could've broken the game wide open. But we didn't and you saw what Southern Boone did with that."

What the Eagles did was score two runs in the third and, after Blair Oaks scored one in the third as well, add four more off starter Bryce Pritchett in the fourth to tie the game at 6.

Pritchett "seemed to be getting his slider and his curveball over, and his changeup was really good today," Antle said, "but when he missed with those fastballs, being the good team that they are with good hitters in their lineup, (Southern Boone) capitalized and they made the most of their scoring opportunities there in those couple of innings."

Pritchett's teammates responded by putting a run across in the bottom of the fourth to keep the senior's chances at a win intact. The Falcons then took advantage of four hits in the fifth to score two more runs and a triple led to an insurance run in the sixth.

"I think that confidence from those early innings carried over into the middle and late innings," Antle said. "I think they felt that if we scored early, we can score late as well."

Meanwhile, the Eagles' scoring momentum evaporated when Jason Rackers entered in the fifth. He struck out seven of the 10 batters he faced and allowed just one hit, a single, to earn a three-inning save.

"Jason's done very well for us in that role this year, especially as a sophomore with no prior varsity experience before this year," Antle said. "He's settled into that role. He's pitched mostly in relief - he's had one start for us - and any time we've sent him to the mound, he's done a real good job for us."

"After struggling offensively (in a 7-2 loss) at Helias, to come out today and string several hits together and score in every inning, that was a welcome change," Antle said. "To come out and score against a good team like Southern Boone and play from in front, that was different, too, and also a good thing."

Two of Blair Oaks' three extra-base hits came off the bat of centerfielder Jordan Hair, who reached base in every at bat and was a home run short of the cycle.

"We were all confident," said Hair, who totaled 19 bases on the day. "We kind of had a slump at the beginning of the season. Now we're trying to get back into it, and I think we have."

The Falcons' offensive renaissance began with a little help. Adam Schell kicked off the bottom of the first with a walk, Hair reached on a misplayed bunt, and Jacob Wilbers took first on an error that scored Schell. Alec Sieg then poked a single down the left-field line, scoring Hair, and Dalton Fifer scored Wilbers with a single down the other line.

Schell led off the second as well, this time knocking a single to right-center, and Hair backed him up with a single of his own. Schell went first-to-third on the hit and scored on Brent Heckemeyer's sacrifice fly. Wilbers singled through the left side of the infield, and back-to-back walks from James Reinkemeyer and Fifer plated Blair Oaks' fifth run.

Hair and Heckemeyerd did the damage in the third with a double and a single, and Sieg began the fourth with a grounder up the middle that evaded the pitcher, the shortstop and the centerfielder. Sieg, who took second on the outfielder's mishap, moved to third on a Reinkemeyer bunt and scored on a Mason Gipe single.

Schell continued his leadoff success in the fifth by singling past the shortstop. He stole second and scored on Hair's single. Hair, who stole second and third, came home on Sieg's third hit of the day. Reinkemeyer slotted a double down the right-field line to score Sieg.

To close out the Falcons' scoring, Schell reached on a fielder's choice, was nearly picked off first base and then scored when Hair tripled the very next pitch to deep right-center.

Blair Oaks improved to 8-15, while Southern Boone falls to 15-9. The Falcons play Iberia and South Callaway in a doubleheader Saturday at Mokane.