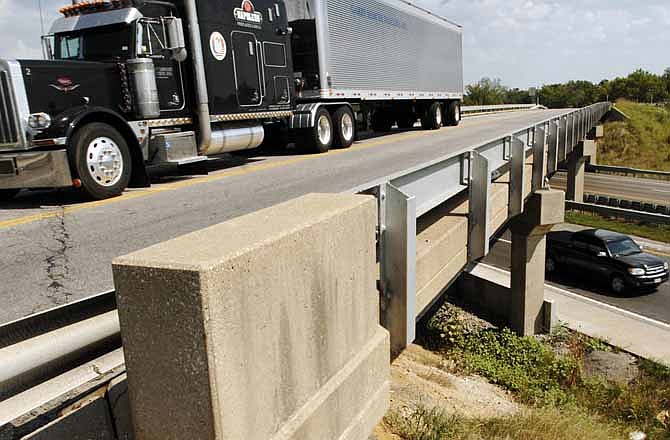 Schaaf presented his plan Tuesday to the Senate's General Laws and Pensions Committee, which he chairs.

Schaaf proposes to treat I-70 as an asset and lease it "to a company that would, then, give the state a sum of money," perhaps $3 billion or $5 billion.

He said other states, like Indiana, have followed a similar plan successfully, but the committee also was told the company that paid nearly $4 billion for a toll road filed for bankruptcy last September.

The private company leasing the interstate would manage it for a contracted period of 30, 40 or 50 years, Schaaf said, and collect tolls to recover its investment.

"I would envision that, ideally, we would collect tolls only on the vehicles that do the most damage to I-70, which are mostly trucks," Schaaf said. "If we could do that, it could put us in a good place for the future."

Schaaf has said he would support the idea of a fuel tax increase, if it were sent to a statewide vote. However, his toll road proposal for I-70 doesn't include such a vote. "Not all the people in Missouri would be forced to drive on this road," he said.

He acknowledged others argue a statewide vote is needed to approve tolls.

"Every day, the transportation issue is important to me because my employees, my vehicles and my equipment use Missouri roads to get to our job sites, which are both residential and commercial," he explained. "In addition to work around the St. Louis area, we perform work across the state and across the country."

Eigle said Schaaf's idea "sets up an environment where we can, actually, have a long-term fix to our transportation problems. What I like in particular is that it doesn't ask for additional sacrifice from the citizens in the form of any kind of tax increase."

He said the private manager, motivated by profit, would have an incentive to do a better job than the state does.

However, Ron Leone, executive director of the Missouri Petroleum Marketers and Convenience Stores Association, agreed the private operator would be motivated by profits.

"So, not only would you have to pay for the rebuilding of I-70, you'd have to pay that private company a profit on top of that, plus a profit," Leone explained, "(which) also adds substantially to the costs of that project."

Leone told the committee tolling is a bad idea.

"We think this is privatizing a very basic function of government - and it's not appropriate," Leone testified. "Building roads, building infrastructure - that is something you have been charged to do by the people of your districts."

Tom Crawford, president and CEO of the Missouri Trucking Association, said Schaaf's idea would target only his association's members - and they promise to avoid toll roads whenever possible and instead use "the roads that are free, that we've already paid for and the ones that we currently pay for."

He noted trucks already pay for roads throughout the country because their fuel tax costs are apportioned among each state they drive through - even if they don't stop and fill up in that state.

"We want to do it in the most efficient, most fair and most proportional way possible," Crawford said, "and that is absolutely, positively, unequivocally is a fuel tax increase."