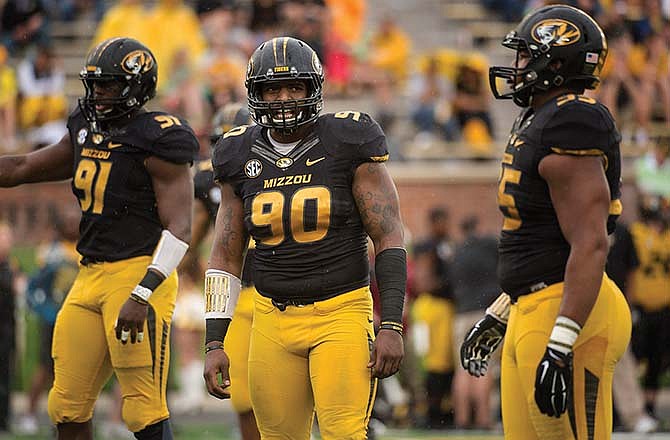 Missouri defensive lineman Harold Brantley (90) shouts a play to his teammates during Saturday's spring game at Faurot Field in Columbia.

COLUMBIA, Mo. - The Missouri football team's reserves defeated its first-teamers 17-10 on Saturday, but overshadowing the score was the process of gauging the Tigers' progress as spring camp came to a close. 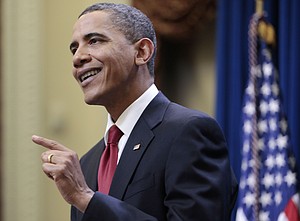 Photo by Charles Dharapak / AP
None

"We're better," Missouri coach Gary Pinkel said. "We're not looking at this game and saying, "Well, did we arrive?' or "Did we not arrive?' or "Are we where we want to be?' Things did not dramatically change. They changed little by little. All the experience that you have, whether it's good or bad, generally all that will help you become a better player."

Quarterback Maty Mauk, who returns as Missouri's starter with a season and a half experience under his belt, completed 9-of-14 passes for 68 yards and the games' only touchdown.

"You didn't just see me catching (the snap) and bailing out like usual," Mauk said. "The offensive line, for sure, had a tremendous scrimmage. I can count on two or three fingers the plays that their protections were bad, and that's what you want to be. I've got the confidence in them, and now they're starting to feel me being able to step up in the pocket, and I know they're going to protect me, so from that standpoint, I feel great."

Mauk also paced the Tigers on the ground with 40 yards.

"He ran a bunch today, and none of it was by design," offensive coordinator Josh Henson said. "That's obviously a great thing that he brings, so if we've got to use that more to win, then that's what we've got to do."

The junior quarterback's receivers are severely lacking in experience following the loss of seniors Bud Sasser, Jimmie Hunt and Darius White. J'Mon Moore was on the receiving end of Mauk's touchdown, a 3-yard fade as the first half expired. Moore had three total catches for 11 yards.

"J'Mon probably wouldn't have caught that fade Day One," Mauk said, "and now he's starting to realize what he can really do. He's a 6-3 body that can go up. He's athletic. He can make the catches, make people miss and has that whole package."

Moore and fellow sophomore Nate Brown, who is out with a knee injury, are two of the leading candidates to take the reigns at receiver. Moore said he saw significant improvement among the young receivers as spring camp progressed.

"We're young, so a lot of the players had to learn a lot of things fast, " he said. "So they came out there kind of iffy, but as practices went on and scrimmages went on, people started to know their assignments better and know what they were doing, and that makes the flow. That makes the ship move."

The Tigers' leading receiver Saturday was Raymond Wingo, who was recruited as a defensive back but has seen time on the offensive side this spring. He hauled in three catches for 53 yards, including the two longest plays of the day: catches of 25 and 23 yards from quarterback Marvin Zanders.

"I caught a couple balls, but I wanted to score, so I didn't do too well," Wingo said.

Wingo said he found out around the time of the Tigers' Citrus Bowl victory he would see some time at receiver.

"We've got a good group of receivers," he said. "We all want to work together. We all want to be great. We all know what (last year's) receiving corps did together, so we're out there trying to work hard at getting to where they were."

In addition to Brown, the Missouri offense was also missing tight end Sean Culkin and right guard Connor McGovern to injury. Eddie Printz headed the reserve team and completed 12-of-16 passes for 73 yards. Zanders racked up 68 yards on 5-of-12 passing, and Corbin Berkstresser was 3-of-4 for 28 yards.

Russell Hansbrough led all tailbacks with 36 yards on six carries. Tyler Hunt and Ish Witter each had seven carries, going for 26 and 20 yards, respectively.

"It's a long time coming, (getting) ready for the spring game," Burkett said. "So it was a lot of fun to actually get to hit some people."