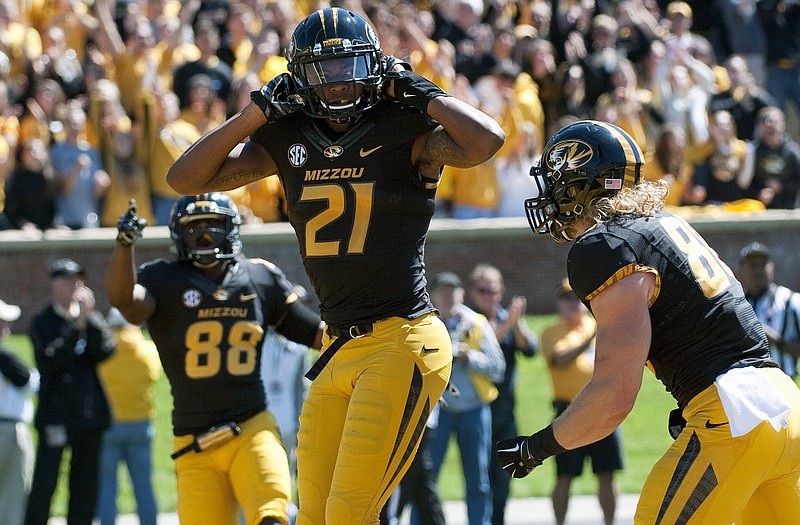 COLUMBIA, Mo. - At the end of Missouri's first offensive drive Saturday against Central Florida, quarterback Maty Mauk spun away from UCF tackle Jaryl Mamea, who broke through the left side of the Missouri line.

Mauk took off, ran past the left hash mark and threw across his body. The ball floated past one defender, preoccupied with Bud Sasser in the front of the end zone, and ahead of two other Knights who failed to catch up to the ball's final destination, the hands of Jimmie Hunt.

"There's a little bit of design in a very undesigned type play," coach Gary Pinkel said. "There's a method to the madness there a little bit."

It's a method Missouri's senior receivers are becoming more and more familiar with. Hunt, Sasser and Darius White put in extra time with Mauk on receiving drills this summer - including scrambling drills - and it's paying off for the sophomore quarterback and his senior trio.

"We wanted to prove something as a unit, not just as one guy or two guys," Hunt said. "We wanted everybody to put forth a big effort, so it can trickle down to some of the younger guys."

Hunt said Mauk and the receivers stayed in Columbia for most of the summer to hone their mechanics.

"You're thinking long-term, when you're doing that," he said. "... You've got to grind it out, and really that's what it's all about. The grind. If you can make that happen, just going out every day with that mindset: "I've got to get better at something.'"

One of those somethings: the scramble drill.

"When you scramble, your receivers all go to certain levels in the face of the quarterback, in the way that the quarterback's going trying to find open space," Pinkel said.

Scrambling becomes a much bigger threat with a mobile quarterback like Mauk. Defensive end Shane Ray has seen in practice just how frustrating chasing the first-year starter can be.

"As a defensive lineman, you get past that offensive tackle, and most quarterbacks that aren't mobile, you can get them, because you're already running," Ray said. "But with Maty, he's quick enough to where he can run just as fast as you're already running when you chase him down. He's really elusive, and he'll tire you out."

On the back end of the scramble, the receivers shift to different levels to try to create a space where a ball can fit, as it did on Missouri's first score against UCF.

Now, unappreciated repetition logged during the heat of summer is paying off as temperatures drop and crowds grow.

"It's awesome, because you look out there, ... and it's kind of exactly what we practiced, just the three of us," Mauk said.

"There'd be a quarterback, a receiver, and we'd practice. It's just you on your route: What would you do in this situation? And to see it actually come in and actually work in a game, it's awesome, and we're really excited about that."

Hunt in particular has benefited from the Tigers' success on scrambling plays. Half of his touchdowns have come when Mauk scrambled to his left.

"I'm a little jealous about that," Bud Sasser said. "He always seems to find the end zone with Maty on those scramble drills."

But Sasser needn't be too envious. He currently leads the Tigers with 215 receiving yards and he and Hunt both have four touchdowns, team bests.

In fact, all three have seen increased production in a year where they are expected to step up at an attrition-filled position for Missouri.

White and Sasser are exceeding their career yards-per-catch averages, and both have surpassed their career TD totals in just three games. All three of the seniors haved outpaced their career averages for yards per game by at least 26 yards so far. They have accounted for more than 68 percent of Missouri's receptions and nearly 80 percent of its receiving yards.

Nationwide, the Tigers are tied for fourth in passsing touchdowns with 12, and 11 have gone to Sasser, Hunt or White. All this in a year when Missouri's receiving corps was a question mark after the departures of L'Damian Washington, Marcus Lucas and Dorial Green-Beckham.

"We're not really worried about everybody else's expectations," Hunt said. "It's the ones we have set for ourselves. Just going out working hard during practice and to leave it all out on the field, that's what we're all about."

And don't forget about Mauk. In his first year with the full-time starting job, his success and potential have elicited comparisons to Heisman Trophy-winner Johnny Manziel.

And as well as the offense has performed - the Tigers have scored 38 or more points in every game - Mauk said it's just getting started.

"Right now, I'm probably playing at 60 percent of what I should be," he said. "I've got a lot to work on, read-wise, getting the ball out. And that's exciting for me, because we're winning right now, and, really, I'm playing 60 and our offense, we're playing 62 (percent). We're not nearly what we're capable of, but that's a good thing, and we know what we've got to work on."

The offense will likely see changes in the games to come. Hunt said he expects defenders to key in on him, leaving other targets free to catch Mauk's post-scramble heaves. And, prolific as they have been, Pinkel said Missouri might rein in Mauk's feet a tad.

"(Scrambles) also save the possibility of sacks, too, so there's kind of a give-take thing right there, but what you don't do is you don't try to change him."

Regardless, the threat Missouri presents with a mobile quarterback - and receivers who know how to get open for him - will likely be giving defenses headaches for games to come.

"The guy that can get out of the pocket and move his feet is always going to be an extra target for the defense," Ray said. They "create plays and just extend long drives with his feet, so they're always dangerous, and any coach is going to be preparing for guys scrambling like that."