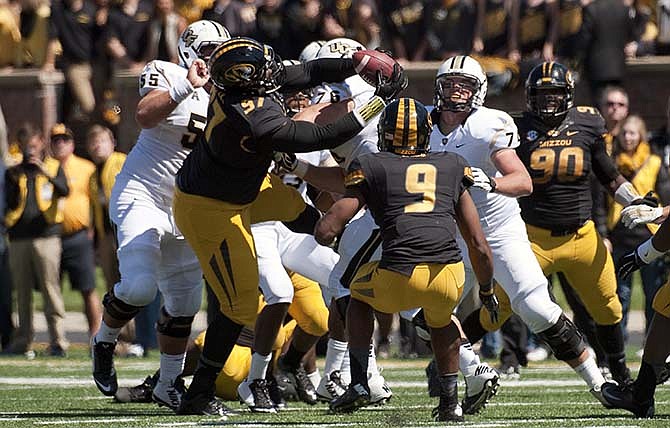 Missouri's Josh Augusta, center, pulls down an interception in a crowd of players during the third quarter of an NCAA college football game against Central Florida, Saturday, Sept. 13, 2014, in Columbia, Mo.

COLUMBIA, MO. - In 2012, Missouri recruited Stephenson High School quarterback Justin Holman out of Georgia. But ultimately, he decided to play for Central Florida.

On Saturday, the sophomore quarterback got plenty familiar with Faurot Field, as the Tigers sacked Holman six times en route to a 38-10 victory against UCF.

But while the Tigers ended up with their third win this season by 20 or more, the game didn't look destined for a blowout early on. In fact, the Tigers were down a field goal for six minutes in the second quarter - the first time Missouri has trailed all year.

"It was a combination of a lot of things," Missouri coach Gary Pinkel said. "It really played into what they wanted to do. I think that was their plan. They wanted to keep it close and get it in the fourth quarter and have a chance to win it."

Missouri forced a three-and-out and scored on an 11-yard pass from Maty Mauk to Jimmie Hunt to start the game, but UCF answered with a 19-yard field goal. Then a Mauk interception set up a 10-play, 31-yard UCF drive that ended in a 2-yard touchdown pass on fourth-and-goal.

But that was the last of the scoring the Knights would do Saturday.

Mauk and Hunt connected again in the end zone to finish off a 14-play, 75-yard drive, but the Tigers hadn't yet picked up steam. Missouri and UCF traded punts on the first three possessions of the second half.

Josh Augusta, a 6-foot-4, 335-pound sophomore, was in the right spot for a pass that deflected straight up in the air off a Knight helmet. The former high school receiver went up and grabbed the first interception of his life.

"I saw it, and I'm like, "This is just like high school,' so I was supposed to go get it," said Augusta, who kept the ball.

The floodgates opened after that, and the Tigers went on a 31-0 scoring run, going back to Hunt's second score.

Missouri's offense took over on the Knights' 45, and Mauk threw a 21-yard pass to Bud Sasser, who dove vertically into the end zone in the style of a former Missouri tailback.

"Yeah, shout out to Henry Josey for that," Sasser said. "He taught me that right there."

Sasser and Mauk hooked up again on the next drive for a 22-yard touchdown. Michael Sherer then recovered a fumble forced by Shane Ray, and Andrew Baggett hit his only field goal attempt of the day. A Duron Singleton scoop and score put the Tigers up four touchdowns.

Mauk finished with four touchdown passes - two each to Sasser and Hunt - putting him at 12 on the season, and Marcus Murphy ran for 95 yards. But the real stars of the game played on Missouri's defensive line.

Markus Golden, Lucas Vincent and Rickey Hatley all had sacks, and Shane Ray had the most impressive line of all: two sacks, four tackles for a loss and one forced fumble. Ray and Golden have at least one sack in every game this year.

"Overall, for the defensive line, I think we played really, really well," Ray said. "I know our defensive tackles have been really hungry and have wanted to make plays, and today they did that. They stepped up and they made plays. Me and Markus did what we were supposed to do, and as a unit, I think we did an excellent job."

"The turnover streak is huge," Ray said. "I mean, each game we want to be able to get the ball back to the offense so they can score and make big plays. Takeaways are momentum changers for us. ... Us coming in at halftime, we understood that we needed to get more pressure and we needed to make some things happen. We just came out with the intensity and the idea to do it, and we did."

The Tigers shut out UCF in the second half. Every drive for the Knights ended in either a turnover or a punt in their final two quarters.

It was a big shift for Missouri's defense. The Knights outgained Missouri 165 yards to 114 in the first half and led the time of possession battle by more than nine minutes. The Tigers defense allowed third-down conversions of 19, 12 and 16 yards in the first half.

"Those should be slam dunks," Pinkel said. "There's no slam dunks, but those should be well in your favor. We gave up two of them, which kept drives alive, and when you do that - what that does to your team, psychologically, you've got to battle through that, too. That's all mental toughness."

Meanwhile, the Missouri offense was a pristine 10-of-14 on third-down conversions, including six for its first six. Mauk finished 14-of-24 for 144 passing yards with an interception.

Missouri (3-0) hosts its final non-conference opponent of the season next Saturday against Indiana. Game time is 3 p.m. (SEC Network).