Murphy doing it all for Tigers 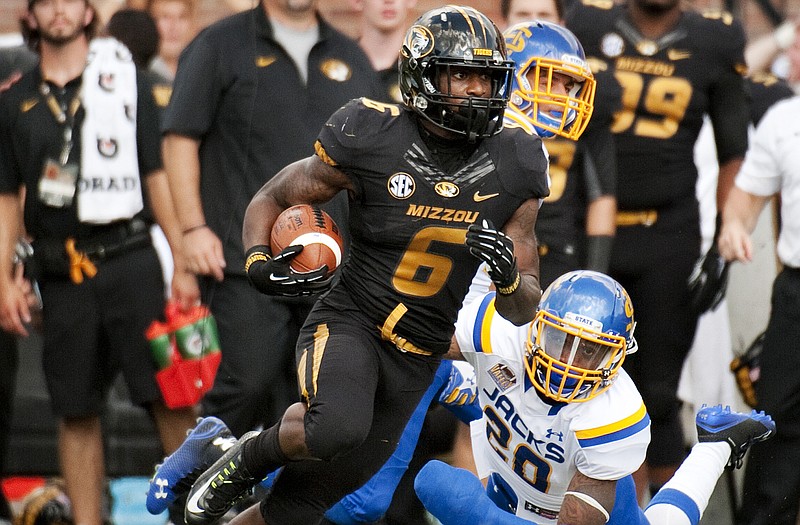 Missouri's Marcus Murphy runs past a diving South Dakota State's Freeman Simmons as he scores on a 100-yard kickoff return during a game earlier this season at Faurot Field.

COLUMBIA - He had already rushed for 1,000 yards. He had returned three punts for a touchdown - and two kickoffs, to boot.

Yet, before Missouri's game Saturday at Toledo, Marcus Murphy had never started a game for the Tigers.

The senior tailback finally earned his "starter" designation at his default position, where he is listed as co-starter with Russell Hansbrough. But most of the buzz surrounding Murphy this season has centered around two other positions: kickoff returner and receiver.

Murphy showed why he is a such a returning and receiving threat in a quick sequence against Toledo. Midway through the Tigers' 49-24 manhandling of the Rockets, Murphy received a punt at his own 27-yard line. Evading four tacklers while making the most of limited room on the sideline, Murphy returned the punt 34 yards to Toledo's 39. Then, he put on his receiving hat.

Out of the backfield, Murphy ran a wheel route and caught a Maty Mauk pass on the very next play to put the Tigers at the 13. Mauk and Jimmie Hunt took it from there, connecting for a touchdown on the second play of the drive.

Though he's fourth in career all-purpose yardage at Missouri, Murphy wasn't set to take kickoffs at the beginning of the year. Ian Simon held that position, but after an out-of-bounds kick and a touchback, running backs coach Brian Jones told Murphy he was taking the next kickoff.

Murphy's first kick return of 2014 went for 28 yards. The next went for 100, providing a much-needed boost for the Tigers, who only led by three at the time against South Dakota State. Missouri coach Gary Pinkel called it a "huge, impact, game-breaking play."

The following week, Murphy was listed on the Tigers' depth chart as the lead kick returner. He retains that spot for Saturday's game against Central Florida (11 a.m., SEC Network). The last time Missouri played the Knights, Murphy's 66-yard punt return for a touchdown in the third quarter was a key to the Tigers' 21-16 road victory.

Murphy had three other returns for a score in 2012. Throw in his kickoff return, and Murphy is tied with Jeremy Maclin for most return touchdowns in school history.

"He's just got the "it' factor for it," Pinkel said of Murphy. "... I think players around him understand, you've just got to get a few blocks here or there, but he's just good in space. He feels people. He senses the right things to do, and you don't coach that."

That said, Murphy still feels he has to compete for his spot.

"It's every week," Murphy said. "We come out fighting for new positions. I really feel like I'll have to fight for that position all year. I've been begging for it, some kick returns, and I finally got it, but I will be fighting for that job all season."

And if two jobs weren't enough, Murphy could see time at receiver this season. With the absence of former receiving threats L'Damian Washington, Marcus Lucas, Dorial Green-Beckam and Levi Copelin, Murphy spent significant time in camp working as a receiver in hopes of improving the Tigers' depth on the perimeter.

However, his time in the slot has been limited because a lingering hip injury to backup tailback Morgan Steward has hurt Missouri's tailback depth. Murphy has six catches for 61 yards and a score in the first two games of the year, but the majority of his snaps have come in the backfield.

As much excitement as there has been about Murphy playing elsewhere, he's no slouch at tailback. Last year he ran for 601 yards and nine touchdowns in relief of Henry Josey. This year, he's tallied 110 yards on 22 runs while tag teaming with Hansbrough, a junior.

While Missouri continues to find ways to use its open-field threat, Murphy doesn't mind where he's playing - so long as he gets his touches.

"If I'm at receiver or running back, it really doesn't matter," he said. "I just want to be able to get the ball and make plays and help out the offense."