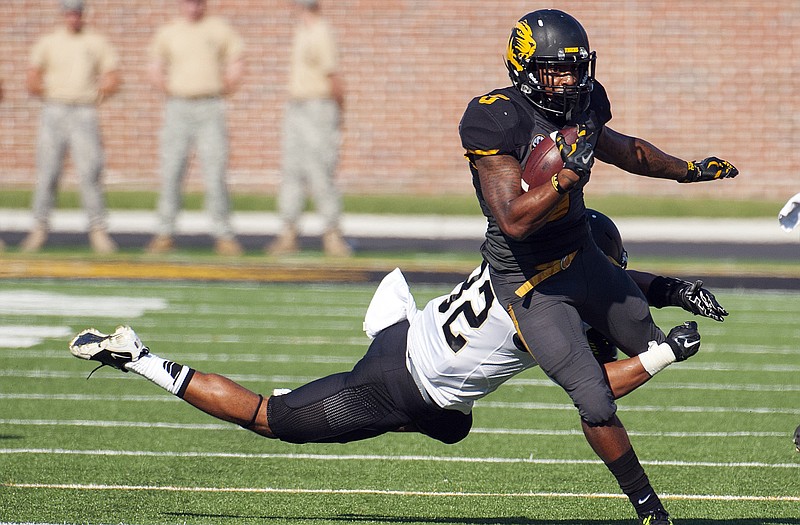 Missouri running back Marcus Murphy is tackled by Vanderbilt's Andrew Williamson as he runs upfield during Saturday's game at Faurot Field.

COLUMBIA - It wasn't hard to figure out Missouri's offensive gameplan against Vanderbilt on Saturday.

Run, run and run some more.

The Tigers' run-to-pass ratio Saturday was 2-to-1, their highest of the season.

"I certainly think that was the offensive staff's plan going in, to try to run the ball a little bit more and throw off of that," coach Gary Pinkel said. "Get that established a little bit and try to get more short third down situations."

The challenge? Getting a straight answer to whether this run-heavy offense is here to stay.

"I couldn't tell you," left tackle Mitch Morse said. "We'll get our gameplan (today), see what (offensive coordinator Josh) Henson's kind of feeling out and then roll with it. It will be a week-to-week thing."

"I think we're going to have to look at it game by game," Pinkel said.

If Missouri does stick with the run, it won't be without good reason. In the Tigers' 24-14 win Saturday, Missouri averaged 5.3 yards per carry, its best since the season opener against South Dakota State (5.5).

Marcus Murphy ran for 93 yards against Vanderbilt, and Russell Hansbrough ran for 87. The duo combined for 35 carries.

Scherer has some firsthand experience. He said during training camp the tailbacks made Missouri tacklers pay when they left their gaps.

"And trying to tackle those guys in the open field is near impossible," Scherer said.

Hansbrough has had a handfull of highlight-reel runs this season. Against Vanderbilt, he drew double takes when he looked down after getting knocked on top of another player but managed to bounce up and run for a first down.

"Some of those pop up on ESPN, and I just look at it like, "I had no idea that happened, but how the (heck) did you do that?'" Scherer said.

One such run came against South Dakota State when Hansbrough cut back and ran all the way back across the field to circle his way into the end zone.

Pinkel has said he would like Hansbrough to be a bit more discerning with his cutbacks, and it paid off Saturday.

"He ran much better inside," Pinkel said. "He's finding out he's really powerful. He's a load. He's got great explosiveness."

Pinkel cited the 10-yard touchdown run when Hansbrough bounced around the right tackle as an example of him making the right read on the defense, not just defaulting to the outside lane.

Meanwhile, another Tiger running threat broke out against the Commodores. Quarterback Maty Mauk ran seven times for 58 yards, including a 35-yarder. Like Hansbrough, Mauk has had to hone his ability to choose when to bounce outside - though Mauk's decisions have been under much more scrutiny, considering the his scrambling tendencies can have on the pass game.

Mauk's legs have been put to good use of late, however, as the Tigers have run designed run plays with Mauk to positive results.

"It was good to get out there and run a little bit," Mauk said. "That puts stress on the defense. You've got to account for one more guy, not just sitting back there throwing the football."

Morse said it was nice to see Mauk slide for one, but don't expect Missouri to put its quarterback in the line of fire too frequently.

"I think you always want to limit that with your quarterback as much as you can," Henson said. "He's going to take some shots, take some hits."

The Tigers need as many run threats as they can get. Pinkel said Monday he doubts injured tailback Morgan Steward will be able to return this season, meaning true freshman Ish Witter will be filling the third-string role. He performed well Saturday, completing a third-down conversion with a career-long 9-yard run.

Not that Pinkel knew it was coming.

"I looked up and Ish was back there. I said, what's Ish doing back there at this particular time?" Pinkel said. "This isn't like second-and-5. Both our running backs were just dinged a little bit. Something happened, and they weren't ready to go, and (running backs coach) Brian Jones put him in, and he made that real nice run.

"We're going to get more confidence with (Witter). He's got great quickness. He's like our guys. They've got great burst. They're quick. They've got good hands, so it was neat to see him go and do that, and so we'll certainly try to get him more plays than what he has."