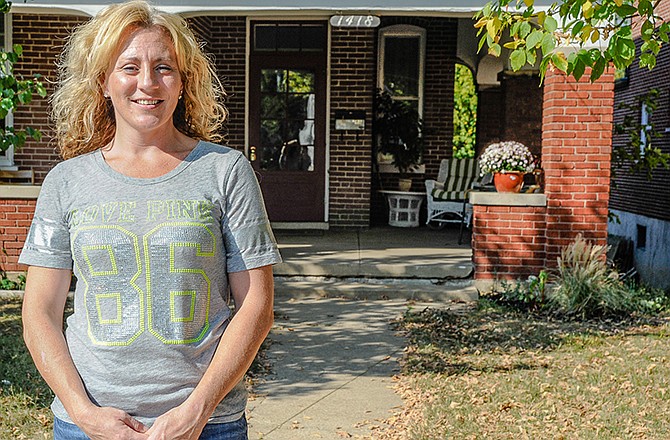 Heather Gieck got a second chance and now wants to offer the same opportunity through the Healing House and New Beginnings. The not-for-profit is still establishing logistics, but hopes to open the one-year, 12-step recovery home and program in the spring of 2015 to women who are returning from prison or a recovery program.

Weighed down by her past to the point she could hardly breathe, Heather Gieck found an unfamiliar peace, a heart change.

Now, she wants to provide a place for other women to make that change.

With a board of directors in place, a location secured and a strategic plan of action, the Healing House and New Beginnings, a 501(c)3 not-for-profit, is on its way to becoming Jefferson City's first recovery house and program for women who suffer from substance abuse.

Gieck will share her story at a chicken dinner fundraiser from 5-8 p.m. Tuesday at Memorial Park.

More than that, she and the board will share their vision of a ministry to help women recover from a hopeless state of mind and body, grow in their faith and responsibility to the community.

Gieck's experience began with salvation. And it's her faith that has led her to see this ministry through.

The Healing House is a Christian-based ministry. But the primary efforts center on providing shelter and resources to guide women to make good decisions, said Rev. James Jackson, board vice president.

The seven-bed facility and one-year program will have high expectations for women coming out of prison or a recovery program. The top priority is to help them get a job.

Housing and employment are the top two concerns the Missouri Recovery Network has dealt with since it was formed about 15 years ago, said Jackson, who is a member.

"When Heather said she would do this, it was huge - definitely an answer to prayer from a pastoral perspective," Jackson said. "We were very excited."

Offenders and those released from programs return to their communities. Without places like the Healing House to offer a safe place to continue making good choices in their lives, they likely would go back to the friends and lifestyle that are familiar, Gieck said.

"The entire community can be at peace if it knows people who are coming out of prison and recovery centers have a place to go," Jackson said. "Their chances of repeating are lessened."

Tuesday's fundraiser invites people to invest in giving someone a second chance to succeed in life, he said.

Gieck said she made a choice to put aside worldly things and fill her ears and eyes with positive things.

"I was reading the Bible, even when I didn't understand it," she said.

Six months later, she noticed herself and others cussing, something she had done all her life. But her heart had changed.

"I heard it and it pierced me; I was so excited - it was working," Gieck said.

Not to lose the ground she had gained while incarcerated, Gieck moved from prison to a 12-step recovery program called Church Army in Branson.

"It was the first time I had a sense of belonging, when I walked in those doors," she said.

A year later, Gieck said she knew she had to give back. She stayed at Church Army two more years operating a women's house and teaching.

Then, she moved home to Jefferson City. As she found a job and began to reconnect with her family, Gieck said the Holy Spirit continued to nudge her about opening a recovery house for women.

Gieck now is a senior at Columbia College, studying human services. And she started a ministry inside the Cole County Jail during the summer of 2012.

It was April 2013 when she bought her home in the 1400 block of West Main Street, where the Healing House hopes to open its doors in the spring of 2015.

The criteria for those eligible to come in to the Healing House are as strict as the rules Gieck will establish, she said.

The women will not have discretionary time at first, and their days, after work, will be fully structured. The longer the women are in the program, the more privileges and free time they will earn.

"This is not a half-way house, not a flop house," Gieck emphasized. "This is a place for one year out of their life, women will get structure, so they can focus on the inside."

Because of Gieck's personal experience, she knows the lies, manipulation and control tactics the women may bring with them. And from her work at Church Army, she feels equipped to lead, she said.

"God brought me out of a life where I was dying," Gieck said. "I was not just saved, I got a new life. It's my responsibility to lead other women out."