Sacks are name of Golden's game at Missouri 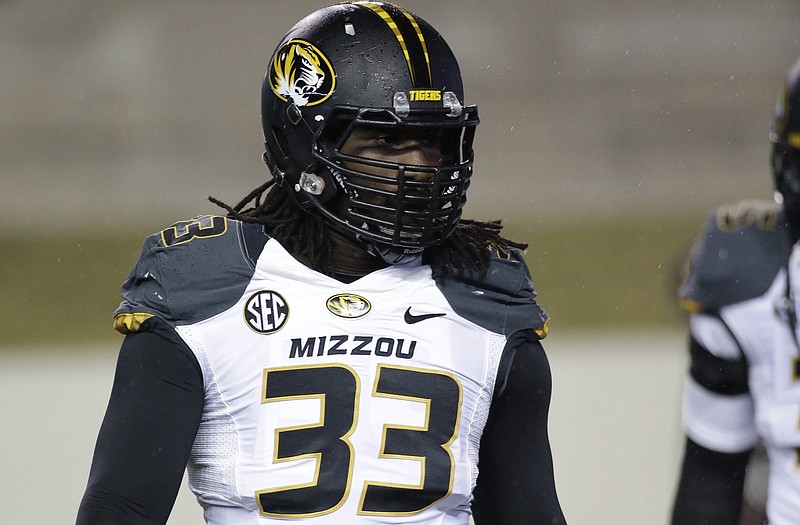 Markus Golden of Missouri warms up prior to Saturday night's game against Texas A&M in College Station, Texas.

COLUMBIA - Nine minutes into his weekly press conference Monday, Missouri coach Gary Pinkel was asked about the play of a senior named Markus in his team's win Saturday at Texas A&M.

Pinkel proceeded to talk about tailback Marcus Murphy's success on the ground against the Aggies, before being stopped by a clarification.

The reporter had been referring to Markus Golden and his breakout game - his first collegiate two-sack game, one that earned defensive player of the week honors from the Senior Bowl on Monday. It was also his first game with a solo sack since Sept. 13.

At the beginning of the season, it would have seemed unlikely for Golden not to be the preeminent Missouri Marcus/Markus, not to slight Murphy and his school-record seven return touchdowns. Golden entered the year on the tips of everyone's tongues as a team captain and a name on the Bednarik Award watch list, awarded to the best defensive player in college football. He was expected to step into the hole left by Southeastern Conference defensive player of the year Michael Sam as a major sack threat on a defensive line with a long history of them.

Instead, Golden suffered a hamstring injury and had to miss Missouri's Sept. 20 game against Indiana, which resulted in a disappointing home loss for the Tigers. Golden returned the next week against South Carolina but failed to get past four sacks on the year until he recorded a shared sack more than a month later against Kentucky.

The injury might have had a lingering effect on Golden's aggressiveness.

"(Athletic trainer) Rex Sharp can say, Pat Smith, our team surgeon, could say, "Hey, you're 100 percent. Let loose.' We can tell him that all he wants, but maybe he's been so guarded against it, because he probably did not want to get hurt again," Pinkel said Monday.

Golden said after watching the Indiana game in street clothes he knew he could not miss another game.

"Anytime you've got to watch your teammates play, and me being the leader of the team, of course I know my teammates need me," Golden said. "So of course it's going to be hard. I love playing football."

Meanwhile, on the other end of Missouri's defensive line, Shane Ray was putting up career numbers, setting the all-time school sack record and shooting up NFL draft projection boards. Golden said though he was happy to see his friend succeed, he was motivated by not being able to match Ray sack for sack.

"They're great friends," Pinkel said of Golden and Ray. "All those guys are, but they want to outdo each other, and that's good. But they're also the ones jumping on each other's backs, too, so it's a very positive environment."

Linebacker Michael Scherer said Golden was hard on himself during the tough stretch.

"He came up to me, and it sounded like he was apologizing to me," Scherer said, "saying he hasn't been himself for the past few weeks, and he needs to be himself."

Scherer told Golden to stick to what he's good at.

It showed Saturday at Kyle Field.

"He looked like he was almost on a mission," Pinkel said of Golden. "He was a game-changer in that game. ... It sounds like he decided, "I'm going to let it go, just to see what happens.' Certainly he had a huge impact on that game."

Golden had nine tackles to go with his two sacks and a forced fumble, but one first-half play in particular stuck out to Scherer.

"They ran a run play off the edge, and the ball went inside of (Golden)," Scherer said. "He spun around and ran. It looked like he was shot out of a cannon and ran the guy down about 9 yards downfield. It was just a great play."

The play was reminiscent of a Sept. 6 touchdown run by Toledo running back Kareem Hunt during which Golden chased Hunt 40 yards down the field. Though he caught the ballcarrier a step too late, the play showed off Golden's relentless motor.

Though at times this year a hamstrung Golden was unable to match the production of a fellow defensive end - or a fellow Marcus - the senior never faltered on one responsibility: team captain.

"He's always been a leader, no matter what strength he was at - even when he didn't play," Scherer said. "He's been beating up himself lately. I've been trying to tell him he's doing fine, but he's been beating himself up, so I think it's more, he's come to peace with himself.

"When he did that, he just let it loose on Saturday."