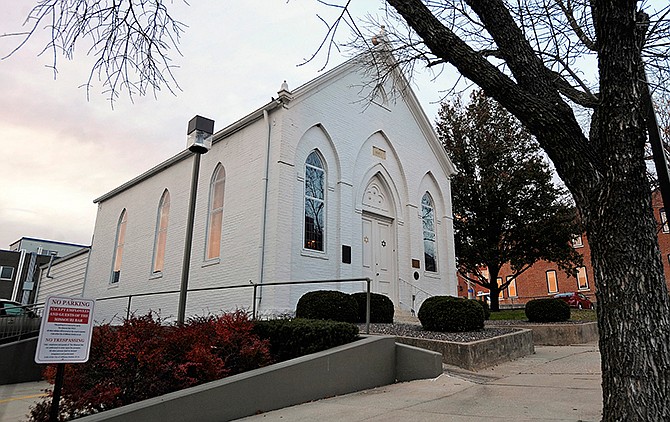 The historic Temple Beth El, located at 318 Monroe St. in Jefferson City, is the oldest operating Temple west of the Mississippi River. The Temple was constructed in 1883 and has been in continuous use since.

Inside the small, simple exterior of Temple Beth El, 318 Monroe St., is a place of worship, rich in heritage and faith.

The wall behind the pews boasts a plaque with the names of the original founding families. And in the ark behind the bima, or altar, is the Torah, from which today's members continue to read each week as generations before them have done.

The membership always has been small throughout its 131 years.

But that is part of the congregation's charm.

"Within these four walls for 131 years, the Jewish community has worshipped every Friday," said congregation president Gail Severance.

In recent years, Severance has developed a genealogy from the founding families and contacted what descendants she could find. As a result, the kitchen and meeting room behind the sanctuary now feature images of several founders and even personal items of a few.

The clawfoot sitting chair at the front of the sanctuary also is original. And Severance says she wonders sometimes who the people were who sat there before her.

By making contact with a descendant of Joseph and Hannah Straus, Severance was delighted to add to the antique chair a pillow hand-sewn by one of the founding women. The founders' plaque even names the six founding women and thanks the "Hebrew Ladies Sewing Society."

The early founders were mostly merchants, eventually building a thriving presence along High Street. Some of them first came this far west when entrepreneurs were sought to open businesses inside the Missouri State Penitentiary.

"I enjoy walking down High Street and thinking about what it was like back in the day," Severance said.

The Jefferson City Hebrew Cemetery Association organized in 1879, according to Gary Kremer's Heartland History. They established Maple Grove Cemetery in the 1200 block of East McCarty Street while also forming their congregation, which was named Beth El in 1882.

The Hebrew Ladies Sewing Society bought the land in the 300 block of Monroe Street in April 1882.

The Oct. 14, 1883, Jefferson City Daily Tribune described the first service, held at Yom Kippur, in great detail. The building itself was designed by Frank Miller, also architect of the Cole County Courthouse.

The congregation's numbers seemed to decline about 1900, then saw a resurgence in the 1930s.

In 1932, the cemetery association relocated their ancestors and future plots to Riverview Cemetery.

Temple Beth El hosted Missouri's ceremonies in 1954, during the 300th anniversary of the first Jewish settlement in North America.

"They created something here, and we've been able to sustain it," Severance said.

Currently, the congregation has about 25 members. Any Jewish member of the community is welcome any Friday at 7:30 p.m., she said.

When Severance moved to Jefferson City from St. Louis with her young family 20 years ago, she said she was worried what effect such a small congregation might have in rearing her children in the faith.

"It's been a great experience for our kids," she said. "We have a strong feeling that we want to teach our traditions to our children so our religion will continue."

Members, even teenagers who have had their bat- or bar-mitzvahs, take turns reading from the Torah and leading the Friday Shabbat services, bringing their own backgrounds and strengths to the meeting.

"We miss people, if they don't come for awhile," Severance said.

The close-knit community benefits from its unique house of worship, too.

In addition to being the oldest active temple west of the Mississippi River, it is the 14th oldest temple still in use in the United States. The church's original Torah was handwritten in 1811 on animal skin, and it sets beside another Torah donated by a Holocaust survivor.

The seven stained glass windows were added and the interior ceiling was raised in a later renovation, Severance said. At some point, the pot-bellied stove was removed, and electricity and plumbing were added. The pews and the floor also were replaced.

"We're proud of our building," she said. "We do feel like it's a treasure in the community that people may not be aware of."