Thompson to play golf at Bradley 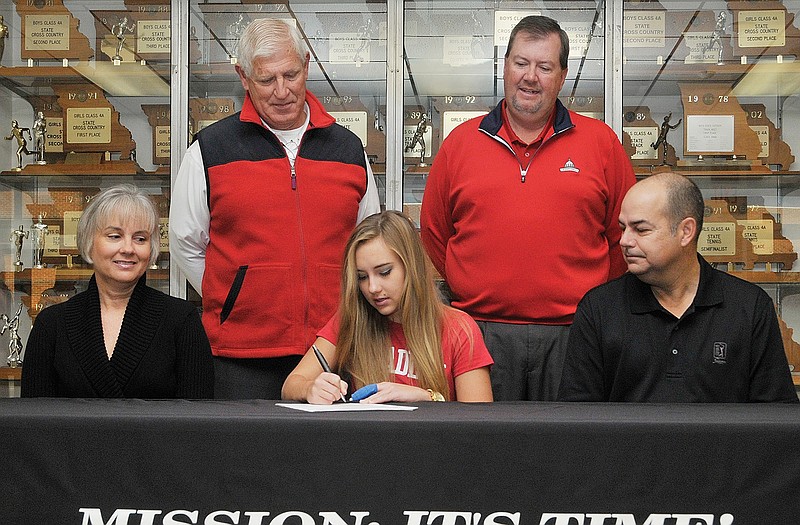 Brooke Thompson had to make a decision.

Her freshman year at Jefferson City High School was about to begin, and she had to choose between softball and golf.

The 154-yard shot, taken from hole No. 3 at Jefferson City Country Club, ultimately led to another decision. Thompson made it Wednesday morning, when she signed a letter of intent to play golf at Bradley University.

"I knew a couple years ago that if she worked at it, she had the potential," Lady Jays golf coach Randy Bickel said. "Because she has the gifted physical assets, and it was just a matter of her wrapping herself around the golf game and being able to control herself, which she's learned to do. With that tremendous work ethic, basically the sky's the limit for her."

Bickel was a familiar face for Thompson when she chose to play golf for the Lady Jays. Her older sister, Blair, had played for Bickel, and Brooke Thompson tagged along with him in elementary school to watch her sister play.

"My mom thinks I wanted to come watch my sister play, but really I just wanted to get out of school," Thompson said.

When she began high school, having a connection with Bickel was meaningful to Thompson.

"It was so nice to come play with someone I was familiar with ... and who was always there for me to tell my problems to, tell my exciting news to," she said. "That meant a lot to always have someone there."

Thompson earned all-state honors her junior and senior year - finishing seventh overall in the latter - and all-district honors three times. The summer before her senior year, she was one of five girls selected to represent Missouri in the Southern States Junior Cup in Cape Girardeau. She said she knew she could compete at the collegiate level when she won the Capital City Invitational her junior year. She shot a 77, two strokes better than a potential Arkansas commit.

Thompson, who plans to enter the medical field, said she felt like Bradley gave her the opportunity to succeed athletically and academically, and she was impressed with the school's fitness equipment - not to mention golf coach Mary Swanson.

"The moment I met their coach, it was an instant connection," Thompson said. "She's such a great lady, and I think she's a really awesome coach, too. So whenever I thought about how much I'm going to be able to learn from her as a college golfer, that really stuck out to me."

A broken finger has Thompson sidelined for four weeks, but when she returns to the course, she plans to improve her iron shots, distance and short game in hopes of making Bradley's travel team.

Bickel, Thompson's parents, Tim and Gail, Jefferson City Country Club golf pro Kevin Dunn and a group of Thompson's friends were in attendance for her signing. Thompson said it meant a lot to have her friends at the before-school event, because golf tournaments are held during school hours, so they are not able to watch her play.

"To actually sign, it makes it all so real," Thompson said. "I'm excited. I'm ready to go. I'm ready to start this new experience and see how it goes."