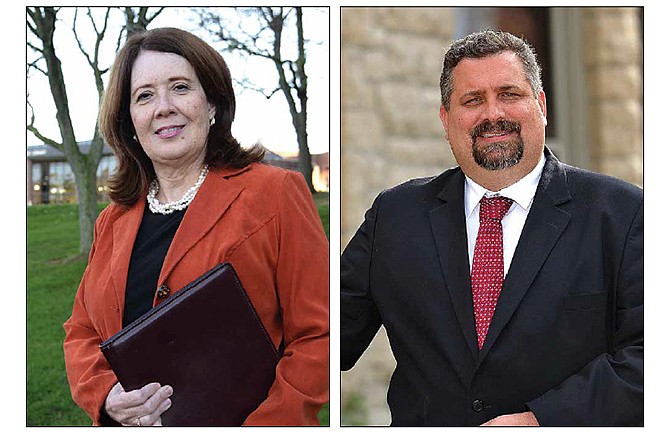 Incumbent Cole County Circuit Court Judge Patricia Joyce, a Democrat, shown at left, is seeking re-election, and is challenged by Republican Brian Stumpe, at right, in the Nov. 4 election.

After hearing that the seat would be vacated, "I decided to run for that seat," Stumpe said last week. "And then, when she changed her mind, that didn't necessarily change my mind.

"I was still going to go forth with it, and follow through with my plan," he said.

Joyce is seeking a third, six-year term on the circuit court bench.

"I looked long and hard at what I wanted to spend my life doing - I have friends who retired way too early, and I have a lot of energy," she said. "This is a great job.

"You get interesting things every day, and you get to balance the unusual legal arguments with knowing that you're actually helping people and you're helping members of your community. ...

"I decided I wanted to do six more years."

Why be a circuit judge?

"I'm excited about the (new) Veterans Court - my treatment courts are important to me," Joyce said. She's presided over Cole County's drug courts since 1999, and the circuit since has added DWI courts and juvenile drug courts.

"I was a law enforcement major in college, and I've been involved in what courts actually do for people for 40 years, plus," she said. "There are a lot more things I think I can accomplish."

He first ran for that job after he and some friends were robbed on Oct. 13, 2009, during their weekly Tuesday night gathering - and shots were fired by both the robber and one of Stumpe's friends.

"But I think there would be an even bigger impact in the judicial area, (and) I think I would have a better impact and a greater impact that way, than where I am right now."

What a judge does

Both think the general public may not understand the judicial process, and think judges do more to make laws than they actually do.

"Every case is fact-specific, and it's the judge's job to sort out the facts and apply the law," Stumpe said. "The goal is to be honest and to be upright, and to be fair in your rulings and decisions.

"But most importantly, as a trial court judge, I decide what the facts are," especially when the parties in the case define the facts very differently.

"Judges listen to the facts and make a decision about truth-telling or not truth-telling - what makes sense, just like everybody else does in their personal lives," Joyce said.

Both agreed that judges shouldn't be making policy - that's what the Legislature does and the executive branch implements.

But judges get caught up in policy disputes, in lawsuits where the battle can involve different interpretations of the same law or a conflict between laws. And the dispute can boil down to a few words - or the placement of a comma or a period.

"The laws are limited to the powers given by the Constitution," Stumpe emphasized. "It's just not your role and your job (as a judge) to change the law."

They're a small part of the total workload - but Cole County's three circuit judges handle cases rarely found in the rest of the state, because state government's "home" is Jefferson City.

There are suits against state agencies.

There are numerous challenges to the proposed ballot language for initiative petitions and constitutional amendments proposed by the Legislature.

And there are constitutional challenges to existing laws and government policies.

"Many of the issues that come in front of this court are unusual issues that no one's ever tested before - that happens at least once a month in my court," Joyce said. "You get the lawyers to argue their best before you, and you do your best to rule - and then you move on, because you know the appellate court will have three judges, if not more, looking at it, and their law clerks will be able to research it."

Judges over the years have said the trial courts are more like a factory's assembly line, where they go from one case to the next as speedily as possible, while making the best rulings possible.

Joyce said the Cole County judge's first job is to make sure there's a full, legal record made in the trial court so the appeals courts - which don't retry the facts - can review the cases, issues and decisions.

"We know, when we've got a case that's going to go up on appeal, that our most important job is to get a decision so they can take it on down the street," she said. "They have the benefit of more time to consider it."

Although sometimes all the courts face tight time frames, because the issue involves a pending election.

"They're similarly situated in the types of cases they hear, so there's a huge impact upon how it can affect the state," he said. "You've got to just be aware of what's out there, and rule based on the law and what the law says can, and can't, happen."

Local judges still handle the variety of cases that all other judges in the state handle, both candidates said - including criminal charges, search warrants, orders of protections, civil complaints and family law issues.

"I don't think you have all these lofty goals and ideals that we're going to (for example) "be the least-overturned judge in the state. I'll be this. I'll be that,'" Stumpe said.

"I think, the ultimate goal is to just be a very fair, very even-handed and very level-headed judge that, when people come to court, they feel they were treated fairly and properly."

Stumpe acknowledges that Pat Joyce's 20 years as a judge is more experience than he brings.

"But is there anything that says, unless you've been a judge, you can't be a judge? No," he said. "I've done defense work and prosecution - I've done both sides of it - which is very important, because so often you think that, just because somebody's charged, they must be guilty, and that isn't so.

"There's two sides to every story, and I've done complex civil (cases) - I think it's important to have a varied background when you come to the table."

He noted his work as a Notre Dame law student, reviewing some complex cases, editing "the teacher's manual for civil procedure textbooks which is taught in the law schools" and his regular return visits to Notre Dame - to "teach in the law school."

He also has been invited to teach law classes at Southern Illinois University.

"I meet the qualifications set forth by the law to be a good judge," Stumpe said. "In nine years, I've tried more cases than most lawyers who've been out (of school) for 30 years.

"So, I've worked on more complicated cases than most attorneys have."

Joyce says experience is important in the circuit judge's job.

"When you become a judge, you have two competing people standing in front of you, and they both have compelling arguments," she said. "So you've got to be able to have the breadth of experience to say, "I've listened to these types of arguments, and I've been able to see two different people in front of me, weigh their arguments out' while knowing that you're making a life-changing event, or at least resolving that critical issue, for people."

She noted she came to the job with 15 years of trial experience - including 12 as an assistant Cole County prosecutor - "and I had trials four or five days every week during those years."

Joyce said that gave her a background of experience, including watching other judges handle cases on a regular basis and learning from them.

"I relied on that depth of experience from before I became a judge," she said, "and every day that I've been on the bench, I've looked back and been able to build on that experience. ...

"And all the experience is important, because you're asking me for judgment - you're asking a judge, "What do you have in your background that will tell us that you will be a fair person, that you know the law and that you have the maturity to go back and make the good decisions.'"

Member of several statewide judiciary committees for the Supreme Court, including current co-chair of budget committee.