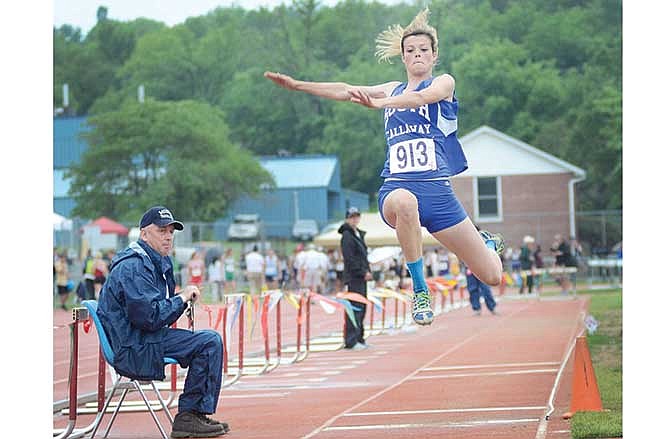 Hannah Oberdiek was down to her last shot.

She began the day hoping for three state titles, but after two trips to the No. 2 spot of the podium, the South Callaway junior had to win the Class 2 long jump to leave Dwight T. Reed Stadium a state champion.

Her 17-0.25 jump had been bested by three-quarters of an inch, and Oberdiek was sitting in second once again. But she made her final jump count, taking first place by more than eight inches in her final event.

"To have a boys and a girls (state title) is awesome, because that just means our coach is great," Oberdiek said. "We just work hard at it, and it's great for both of us."

Oberdiek was a hair away from not having to wait for the long jump to get her title. Her 4x100-meter relay team lost by three hundredths of a second to Metro after finishing first in the preliminaries. Oberdiek ran the last leg of the race for the Bulldogs.

"I got the baton barely in front of Tiana (Jackson), the Metro girl, and she just got out of there faster than me," Oberdiek said. "I tried to catch up, but three tenths of a second, I mean, it wasn't much."

The frustration from the South Callaway relay team, which had hoped to defend its 2013 win in the 4x100, was evident as they hugged after the medal ceremony. Oberdiek had to head straight back to the long jump, and the disappointing finish in the relay didn't help.

Oberdiek walked over to her supporters in the stands between jumps, mostly speaking with her jumping coach, April Holzem, about how much height she was getting.

"And then I'd go over to my family, and they'd tell me good or bad or whatever," Oberdiek said, "and then I'd come back over here and do what I needed to do."

Oberdiek helped score 27 of South Callway's 29 points, good for fourth in the Class 2 girls competition. She also finished eighth in the 100-meter dash, the first of her four events Saturday. Taylor Howard contributed a point for the Bulldogs with her eighth-place finish in the pole vault. South Callaway's Class 2 girls total was the best among area schools.

Russellville tied for fifth place overall with 26 points. Grace Young and Miranda Hill finished third and fifth in the 3200-meter run, respectively. Neither senior had captured all-state honors in track before this year.

Young also finished third in Friday's 1600-meter run. In both races, she started out in the back of the pack and worked her way forward as the end neared.

"Everyone started out faster than I both days," she said. "I knew if I had held on to what they were doing, I wouldn't be able to finish well."

Justice Miller added two points to the Indians' total with her seventh-place finish in the 400-meter dash. Russellville placed fifth in the girls 4x800-meter girls.

Fatima finished 22nd overall among Class 2 girls. The Comets finished in eighth in both the 4x200 and 4x800 relays. Katie Eichholz also added a point in the 100-meter high hurdles. Fatima finished sixth in the girls 4x100-meter relay. Hailey Buscher finished tenth in the long jump, failing to medal.