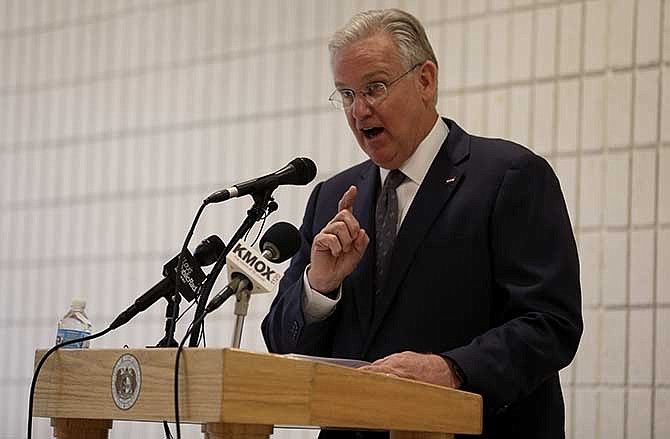 Missouri Democratic Gov. Jay Nixon speaks during an event at Gateway Hubert Wheeler School Thursday, May 1, 2014, in St. Louis. During the event, Nixon signaled his veto of legislation that would cut income taxes for more than 2 million Missourians and thousands of business owners, citing concerns about its potential hit on school funding. The Republican-led Legislature has vowed to try to override his veto.

Republican lawmakers vowed to attempt a veto override as soon as next week. To overturn the governor's veto, Republicans would have to vote as a block and pick up support from at least one House Democrat.

The legislation would cut Missouri's top individual income tax rate for the first time in nearly a century and make Missouri the third state - following Kansas and Ohio - to enact a special tax break for people who report business income on their personal tax returns.

"This unaffordable, unfair and potentially dangerous legislation will irreparably harm public education and the vital public services upon which Missourians rely," Nixon wrote in a message to lawmakers detailing the reasons for his veto.

Republicans insisted they can both cut taxes and continue to spend more on schools.

"This is why Missourians sent this General Assembly here. To govern in a limited-government, free-market way and to try to return whatever money we can to them while taking care of all essential state services," said House Speaker Tim Jones.

Nixon vetoed a more expansive and complex version of the income tax legislation last year and barnstormed across the state to defend it. Republican support splintered, despite a multimillion-dollar advertising blitz by supporters, and lawmakers were unable to pull together the two-thirds vote required in both chambers to override the veto.

The bill's sponsor, Sen. Will Kraus, said he believes there is enough support for an override in his chamber, which is where the vote must begin. House Majority Leader John Diehl said he also believes an override also will succeed. If it doesn't, Diehl said lawmakers will either pass another version of the tax cut or refer it to the statewide ballot.

Missouri's tax cut battle has been among the most intense in what has become a national trend. About a dozen states passed income tax cuts last year as revenues began rebounding from the Great Recession. Several states already have cut income taxes this year, including Democratic-led New York and Republican-led Indiana.

The legislation would gradually reduce Missouri's top individual income tax rate - currently charged on all income over $9,000 - from 6 percent to 5.5 percent. It also would phase in a new 25 percent deduction for business income reported on personal tax returns. The incremental tax cuts would begin in 2017, but only if annual state revenues keep rising by at least $150 million over their high mark from the previous three years.

The legislation also would increase a tax deduction for low-income residents and make annual adjustments to Missouri's tax brackets based on inflation.

Economists at the University of Missouri-Columbia have estimated that the tax cut legislation will eventually reduce state revenues by $620 million annually.

But Nixon has raised concerns that it could punch a $4.8 billion annual hole in the state budget. He contends the bill's wording could be interpreted to eliminate taxes on all income over $9,000, though Republican legislative leaders have called that "laughable" and "absurd."

Nearly 2.5 million taxpayers could benefit from the reduction of the top individual income tax rate, according to the Missouri Department of Revenue. The new deduction on so-called pass-through business income could benefit several hundred thousand people whose businesses are structured as sole proprietorships, partnerships and limited liability corporations.

Wealthy business owners would stand to gain the most.

Nixon said Thursday that the tax cut would "shower windfalls on the well-heeled" and that, because of the business-income deduction, the cut could result in an employee paying higher taxes than his employer - even if they both earned the same amount.

Missouri business groups urged lawmakers to override the veto. Dan Mehan, the president and CEO of the Missouri Chamber of Commerce and Industry, denounced Nixon's veto as an example "of petty politics standing in the way of economic growth."

The above version of this article updates and elaborates on an earlier version.