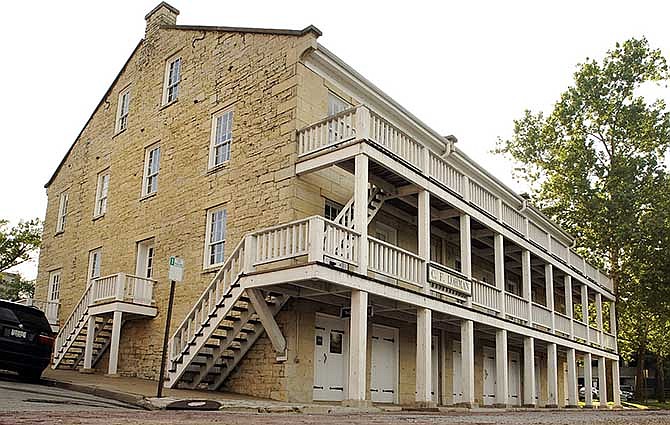 The restored Lohman Building is seen in this June 12, 2014, photo. The structure has stood at the Jefferson City landing since 1839.

Steamboats were pulling in wherever looked good to them along the Missouri River's edge and Missouri legislators were sleeping in residents' small homes.

Before 1839, when James Crump built what is know now as the Lohman Building, Jefferson City was a frontier town. That same year, the city incorporated and its first steam ferry was inaugurated. 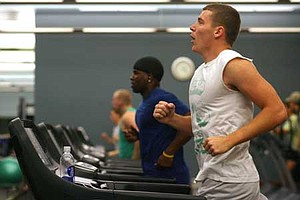 Photo by William Moore
University of Arkansas sophomore Zach Dailey of Gravette and others run on treadmills Friday at the health, physical education and recreation building on the Fayetteville campus. They were participating in National Run at Work Day, with a goal of helping UA faculty, staff and students log an overall 1,000 miles of exercise.

"There wasn't much here and he saw an opportunity," said Missouri State Museum Director Linda Endersby.

The Greek-Revival, three-story building created stability at the primary wharf for the city. The stonework style Crump used on the Lohman Building, he repeated in the construction of the Cole County Courthouse and Grace Episcopal Church.

Crump operated a grocery - including food, hardware, shoes and liquor - out of the western third of the building.

The lowest floors of the other two sections soon were sold to other entrepreneurs.

James Dunnica, a judge and one of the city's earliest residents, with E. B. Cordell bought the center portion, which they called the "Stone Warehouse," where they received and forwarded freight. Cordell later bought other sections and was named wharfmaster in 1847.

John Yount also operated a warehouse in the eastern third. He also owned a share in the city's first steam ferry and he maintained his own wharf on the Callaway County shore.

In his second year of operation, Crump opened the Missouri House hotel. Rooms were on the top floor, the second floor featured a portico with an expansive view of the river, and the basement included a bar.

During the 1842-43 session, more legislators stayed at the Missouri House than anywhere else, including at least four other hotels, according to Eldon Hattervig's "Jefferson Landing: Commercial Center of the Steamboat Era."

As other taverns of the day, the Missouri House was as much a social location as a provider of room and board.

The city struggled with cholera after the steamboat Monroe landed in May 1849 with sick, Mormon immigrants. The landing resulted in 63 deaths among travelers and residents.

But the recurrent illness outbreaks did not deter travelers or commerce, and the Lohman Building remained at the center, as shown by the telegraph office moving from the Capitol to the Missouri House in 1851 and the stage company opening an office there in 1853.

The building's namesake Charles Lohman, 24 at the time, with his brother-in-law Charles Maus, bought the east section in 1852 as a freight transfer business.

Lohman had immigrated from Prussia a decade earlier and married another Prussian immigrant, Henrietta Linsenbarth, in St. Louis. He was the son of a merchant and had worked as a tinsmith and tanner.

Maus, the son of affluent aristocrats from Hesse-Darmstadt, Germany, was a stonecutter.

The new owners of the Missouri House next door, renamed the business as the Pacific Railroad Hotel in 1853, three years before the rails would reach the city.

And Maus jumped into the hotel business in anticipation of the railroad opening in 1855, building the brick hotel, known today as Union Hotel, across Jefferson Street. The boarding facility was first called the Missouri Hotel.

The boon in transportation brought good fortune for the wharf-based businesses. But the incoming numbers were so high and living quarters so low, the legislators considered transferring the legislative session to St. Louis in 1857.

As many capitalists took advantage of the disparity in demand and supply, Maus added to his hotel and named it Veranda in 1858.

"This was one of the happening places at the time," said assistant director Muriel Anderson.

The Capital City's short-lived position as a transportation center declined after the railroad reached Tipton in 1858.

By 1859, Lohman had full control of the business at the east end of the Lohman Building. Maus instead opened his own store on the lower level of his own building.

Lohman became the most active merchant at Jefferson Landing after the Civil War began, purchasing the other two sections by 1862.

Historians believe the Lohman family lived in the upper floors, since advertising for boarding facilities there ended in 1859. The entire ground floor became mercantile and warehouse.

Maus, on the other hand, served as captain of Cavalry Company E in the Missouri State Militia. And today's name of Union Hotel is the result of his service.

"Jefferson City, which had prospered because of its unique position as a railway transfer point, now suffered the fate of an outdated transportation center," Hattervig's book said.

Lohman's business survived and he became a shareholder in the remaining river trade with the Viola Belle, until its sinking in 1871. And he concentrated his freight business on local traffic and grain shipments.

While in 1873 a local newspaper named the wharf area "Lohman's Landing" in an article, Maus relocated his business ventures to the corner of High and Jefferson streets.

Charles' son, Louis Lohman, bought his father's business the next year and it also moved to High Street.

After the Lohman and Maus families left in the 1870s, their properties became tenements and warehouses, even for the Tweedie Shoe Company in the early 20th century.

Instead of demolishing the historic structures for parking lots, the state government was swayed by local preservationists to preserve the Lohman Building, Union Hotel and the Christopher Maus House. The Jefferson Landing State Historic Site became the state's bicentennial project.

The Lohman Building, a city-designated Landmark is a rare survivor from the Missouri River's steamboat era, 1820-1865. A part of the Jefferson Landing State Historic Site, the building also has been listed on the National Register of Historic Places.

The sights, sounds and smells likely experienced by travelers and merchants inside the general store of the 1850s has been recreated in a new interpretive space on the lowest level.

A long wood counter is offset with floor-to-ceiling shelves behind it, filled with examples of items that might have been sold 150 years ago and present-day items made by Missouri crafters.

Cubbies similar to an early post office stand in one corner and sacks and barrels are scattered around.

"The building is the only artifact," Endersby said. "People are surprised at how old this building is."

Visitors are encouraged to bring a picnic lunch to the south lawn of the Lohman Building, where live music and dancing with the Loehnig German Band Dancers will be ongoing.

Old-time demonstrations will include blacksmithing and ropemaking. And old-fashioned games will include potato sack races and a cake contest.