Jays fall to Waynesville in OT 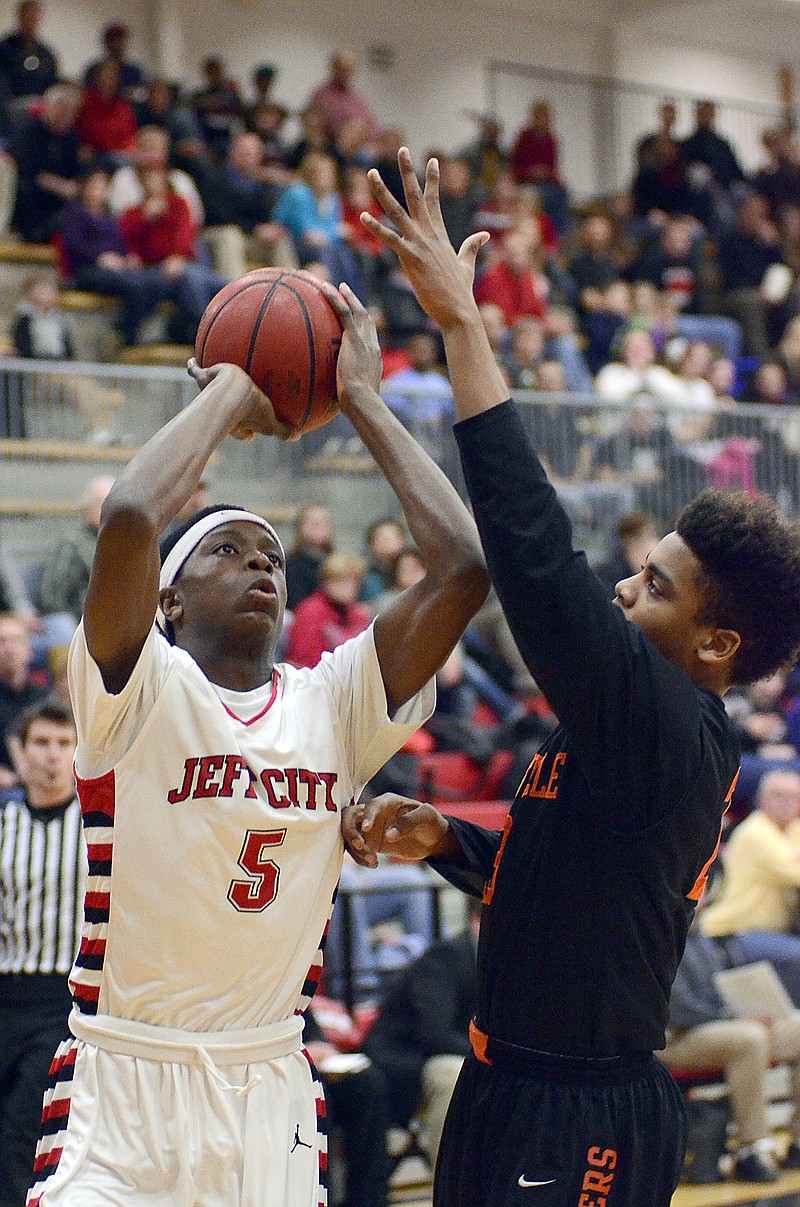 The Jefferson City Jays put themselves in a position to knock off the No. 7 team in the state.

They just couldn't finish it.

Jefferson City let a four-point lead with 26 seconds left in regulation slip away as No. 7 Waynesville bounced back to claim a 46-44 victory in overtime Friday night at Fleming Fieldhouse.

"We did the things that were necessary to give us a chance," Jefferson City coach Blair Thompson said. "We didn't finish the game very well.

"That's a team that will make a big run in the postseason. We had a chance to knock them off, but we just came up a few plays short."

Following a missed free-throw, Waynesville had 10.5 seconds left to tie the game. The Tigers found an open Juwan Morgan under the basket and Waynesville's leading scorer didn't disappoint. Morgan got the shot off just before the buzzer to tie the game at 38 and the Tigers didn't trail the rest of the way.

"At that point, you're playing defense to try to win the game," Thompson said. "A lot of times, people get caught watching the ball. You see that happen a lot at the end of games - back's against the wall and you're doing everything you can to stop the ball first."

Waynesville hit 4-of-6 free throws and Morgan, one of two juniors from Missouri ranked in the Rivals.com Top 150, scored four of his game-high 21 points to lead the Tigers past the Jays in overtime.

"He'll be playing major Division I here in a little while," Thompson said. "When he got the ball in his hands, he made us pay. They just did what they needed to do to win. That's the bottom line - they finished the game."

Waynesville took 45-41 lead with 13.4 seconds left in overtime, but Harold Robertson kept Jefferson City's hopes alive by knocking down a deep 3-pointer with just more than five seconds to play.

The Tigers hit a free throw to give the Jays one last look, but Robertson's attempt from behind half court fell short.

"I probably should have drew up a better play," Thompson said. "That's all that comes down to. Obviously, they're going to sit back there with two 6-8 guys playing safety and make you catch it in front. It would have taken something pretty special to get a decent shot off."

O.G. Anunoby scored 13 points and pulled down nine rebounds, while Jake White added 11 points and nine boards to lead the Jays, who were 16-of-53 (30 percent) from the field and 9-of-17 from the free-throw line.

"We played a very good basketball team and we played about as hard as we could and gave ourselves a chance at that game," Thompson said. "That's one of those that you look back at and it kind of haunts you."

Waynesville took a 10-8 lead after trading leads six times with Jefferson City in the opening period, but the Jays were able to control the tempo after that.

Jefferson City, which claimed a 55-53 win against Helias in double overtime on Tuesday, went into the break with a 24-20 lead and took a 32-28 advantage into the final period.

"I wouldn't say we outplayed them," Thompson said. "I think we did what we needed to do; I think we executed our game plan well and I think we matched or exceeded the intensity level that they brought. That's why we led."

Waynesville scored the first five points in the fourth quarter, but Darion Jones made back-to-back layups to give the Jays a 36-34 lead with 1:42 left in regulation.

Waynesville missed a 3-point attempt on their next possession, forcing the Tigers to foul with the clock ticking down.

But the Jays didn't capitalize from the line.

"That's the most obvious direction to point, but in reality we missed a lot of layups in the first half and we had a lot of careless turnovers," Thompson said. "Those don't jump out to people because over the course of the game you move on and forget about it"

Jefferson City, which has gone 1-3 in games that were decided by two points this season, will take on Marshfield at 2 p.m. today at the Camdenton Shootout.

Thompson said the Jays are done learning from the close losses.

"Obviously, you'd like to win and talk about how you learned something in the process of winning," he said. "We've lost these types of games a few times this year. I think our guys already know how to win close games, it's just a matter of getting it done - and we're very capable of that."