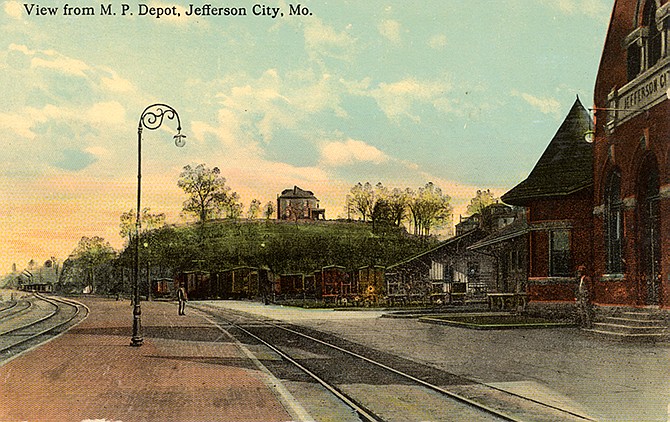 The Depot is one of Jefferson City's most recognizable buildings. A postcard view looks down the tracks from the Depot.

The opulence of the Missouri Pacific Railroad station greeted guests and newcomers to Jefferson City at the turn of the 20th century.

As a 7-year-old who relocated to Jefferson City due to her father's new job with the Secretary of State's office, Bee Kiely Witcher captured that January 1908 memory for her grandchildren.

"We arrived at the Missouri Pacific Railroad station heated by a big, pot-bellied stove," her story recalled in an 1908 News Tribune. "The gaslights cast flickering shadows all around the waiting room, while outside horse-drawn carriages waited to take travelers to their destinations."

The Romanesque Revival-style depot at the north end of Monroe Street is one of the most recognizable buildings in town and was designated a city Landmark in 1994, the second year the honors were bestowed.

After the brick and stone building opened in 1898, many travelers would share the same visions as Witcher, including local men departing for service in World War I. That is until January 1983, when the last Amtrak riders disembarked there.

The current building was not the first depot in Jefferson City.

But, the first depot, which burned during the Civil War, was mandatory from the first conversations about extending a railroad west of St. Louis.

The 1849 Missouri General Assembly created the Pacific Railroad Company to "provide construction of a railroad westward from St. Louis via Jefferson City to the western boundary of the state "with a view of being continued to the Pacific Ocean,'" according to a July 1956 history of the Missouri Pacific Railroad.

Despite one-tenth of the population lost to the cholera epidemic and a devastating fire in the city of St. Louis, the Missouri railroad convention met in October 1849, and by January 1850 it had incorporated.

James Kirkwood, who had to travel by wagon and boat from New York City, was hired as chief engineer with the first objective to survey a route from St. Louis to Jefferson City.

As if politics and business were not enough of a challenge in laying this first set of track in the American frontier, Missouri's rough terrain presented great obstacles in finance and construction.

Nevertheless, the St. Louis groundbreaking took place in July 1851, the first car rolled in December 1852, and a second depot in Franklin County was completed by July 1853.

The railroad advanced to Washington in February 1855 and to Herman in August of the same year.

Anxious to secure additional funding from state legislators, the company was eager to impress them with the final leg to reach Jefferson City. And so invitations signed by residents of the Capital City were sent out in advance of a finished product.

On Nov. 1, 1855, 14 passenger cars all were nearly full with prominent business leaders and politicians at the Pacific Depot for the first departure.

"We understand the road to Jefferson City is in readiness for today's excursion," the Missouri Republican reported Nov. 1, 1855. "Some uneasiness has been expressed as to the safety of the road."

A significant rain the night before coupled with a failure to fasten several parts of the deck on the bridge over the Gasconade River contributed to the following failure.

"The magnificent train of cars, which left our city yesterday is now a mass of ruins," the Missouri Republican reported Nov. 2, 1855. "Infinitely worse than this, many of the noble hearts that participated in pride of the occasion are now stilled in death."

Among the 31 resulting deaths was Thomas O'Sullivan, the railroad company's second chief engineer.

The tragedy and the delay in further construction nearly caused the company to give up on the costly venture.

When the line was opened from St. Louis to Jefferson City in 1856, the original depot connected travelers - and the U.S. Mail - to a fast Packet Line steamboat to carry on westward.

"The depot at Jefferson City extends from the cars to the boat, and the transfer is made through a covered building, lit with gas, without any cost for handling baggage," an advertisement said.

The railroad line's success would be short-lived. Both sides of the Civil War targeted the transportation for sabotage.

First, Gov. Claiborne "Fox" Jackson ordered the Osage and Gasconade bridges destroyed as part of his flight from the Capitol into exile early in 1861.

Then, the U.S. government extended aid seeing the rails continuing west of Jefferson City as a "military necessity."

A fire in February 1863 destroyed the first station and engine house in Jefferson City. And Confederate Gen. Sterling Price's raids in the fall of 1864 burned more bridges.

Despite these conditions, the completed Pacific Railroad connecting St. Louis to Kansas City opened in September 1865.

The residents of Jefferson City donated land west of the Capitol in 1867 for an engine house and repair shop, referred to as "the old rookery" by the State Tribune in Jan. 23, 1899.

In addition to improving facilities and services, Simons worked toward a better relationship between company officials and city business interests.

"The station is commodious enough to answer all the requirements that will be made upon it, even when Jefferson City increases to many times its present size," the paper reported.

The city's population was about 10,000 at the turn of the century.

The 115-year-old station was built by local contractor Henry Wallau and designed by E. Fischer, engineer of bridges and buildings for the Missouri Pacific Railroad.

"Today the traveling public, which passes in and out of Jefferson City, will use the finest station in the Missouri Pacific system, excepting the Union Station at St. Louis," the State Tribune reported Jan. 23, 1899. "This only excels Jefferson City's magnificent new station in quantity, not quality."

The brick is hydraulic-pressed with Carthage stone trimmings and a copper and slate roof.

Inside, the floors were a double hard maple and the chandeliers of oxidized copper.

Six-foot-high oak wainscotting met a green wall which reached to a green ceiling.

The general waiting room was accented by a Roman brick mantle piece and included a ladies' parlor and gentlemen's smoking room.

"Its value in building up not only the country through which it passes, but the two great commercial and manufacturing cities of Missouri - St. Louis and Kansas City - is simply beyond compute. It has brought each of these trade centers into close touch with the fine agricultural and live stock districts of Missouri, Kansas and Nebraska, the cotton fields of Arkansas and Texas, the mineral districts of southwest Missouri, and the untold wealth which is brought to the surface annually in that great producer of precious metals, Colorado," according to the 1900 Cole County Illustrated Sketch Book and Directory.

And in 1946, this location greeted British Prime Minister Winston Churchill and President Harry Truman prior to the historic "Iron Curtain" speech.

In May 1971, Amtrak began its service at the Missouri Pacific depot, relocating to the Union Hotel at Lohman's Landing in 1984.

In December 2012, the local depot was awarded membership in Union Pacific's Train Town USA Registry as part of the railroad's 150th anniversary celebration.

And just this past Christmas season, the Cole County Historical Society featured the Missouri Pacific Train Station as its 27th collectible Christmas ornament.

As for today's building owner, the Union Pacific Railroad is the principal operating company of Union Pacific Corporation, linking 23 states in the western two-thirds of the country, plus connections to Canada's rail system and six gateways to Mexico.

Then, Missouri Pacific and Union Pacific merged in 1982.