Tigers can't get 2nd buzzer-beater in loss to OSU 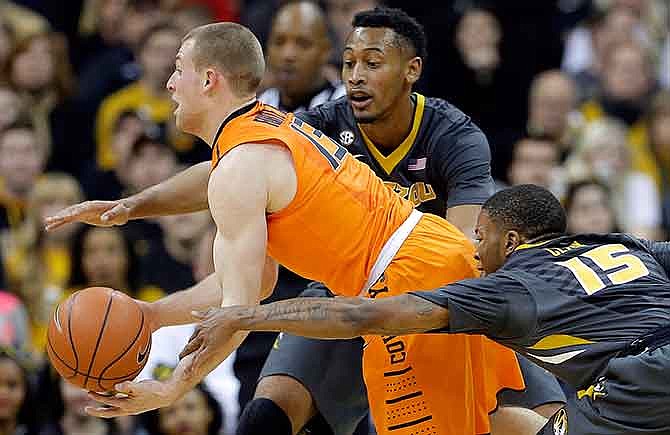 Missouri's Johnathan Williams III, back and Wes Clark (15) try to steal the ball from Oklahoma State's Phil Forte III (13) during the first half of an NCAA college basketball game Tuesday, Dec. 30, 2014, in Kansas City, Mo.

KANSAS CITY, Mo. - In their first game since losing to Illinois on a buzzer-beating 3-pointer, the Missouri Tigers needed two last-second miracles against Oklahoma State on Tuesday.

The Tigers came up one miracle short.

Freshman Tramaine Isabell hit a 3-pointer with :00.2 left in regulation to force an extra period, but D'Angelo Allen's layup attempt sailed over the rim as overtime expired, and Missouri fell to the Cowboys 74-72 at the Sprint Center.

With time ticking down in the second half and the Cowboys up three, Isabell dribbled once, spun and hit the 3 to force overtime.

"Tramaine's one of the best shooters on the team, and we know his confidence is high. If there was anybody to take that last shot, we trusted Tramaine," Missouri freshman Montaque Gill-Caesar said.

Isabell couldn't quite play the hero in overtime, however. After a Johnathan Williams III rebound gave Missouri the ball trailing by one with 33 seconds to play, Isabell turned the ball over to Cowboys guard Phil Forte III.

Le'Bryan Nash hit two free throws to put give a three-point edge to the Cowboys, who fouled Williams on the inbound pass. Williams hit his first free throw. The second, a purposeful miss, bounced wide left, and Missouri regained possession.

"It worked perfectly. It really did," Anderson said of the play.

The aftermath, however, was not as flawless for the Tigers. Keith Shamburger, who ran down the rebound, passed to Allen, who had an open lane but sailed the layup attempt as time expired.

"I think he got up there in the air thinking, "When's that buzzer going off?'" Anderson said. "Didn't know whether to use the board or lay it up and ended up doing neither."

Free throws were a struggle for both teams. Missouri and Oklahoma State missed a combined 22 shots from the line, and a missed free throw by Christien Sager is what kept Missouri within one possession before Isabell's late 3.

The teams started off slowly. Missouri missed its first five shots from the field and didn't hit a jump shot until a 3-pointer by Namon Wright with 8:09 to play in the half. Oklahoma State missed four of its first five field goal attempts.

The teams played to a 17-all standstill 12 minutes into the game. Then the Tigers stormed to an 11-0 run while the Cowboys went on an 0-of-9 shooting funk. The Tigers forced three turnovers during the stretch and held Oklahoma State scoreless for nearly five minutes.

Missouri was led by Williams' 22 points.

Deuce Bello missed the game, and Anderson said he is suspended indefinitely for an academic issue.

The Tigers (5-7) are guaranteed of a losing non-conference record with the loss. Missouri returns to the court Saturday at home against Lipscomb.