Tigers fail to get over the hump 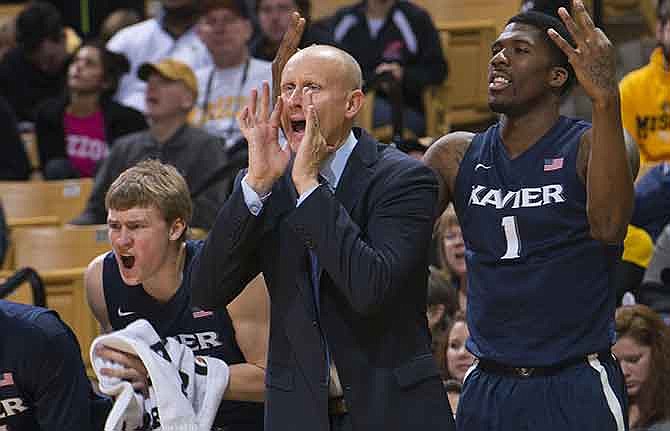 COLUMBIA, Mo. - For the second time in three days at Mizzou Arena, a team whittled a double-digit deficit to one point but failed to get any closer.

Thursday, it was Missouri staving off Elon, but Saturday, the Tigers were on the wrong side of the comeback attempt, falling 74-58 to Xavier.

Missouri came within a point of the Musketeers' lead three times in the second half, but Xavier made more than 58 percent of its shots in the half to pull away.

"We got there, we had chances, and the next step is being able to convert them," Missouri coach Kim Anderson said. "Now, would that have changed the game, if we had gotten a 1-point lead? I don't know. It certainly would've been a big boost to these guys ... but we didn't do it."

After a strong beginning against Elon on Thursday, the Tigers returned to their slow-starting ways Saturday. Missouri didn't score its second field goal until nearly nine minutes into the game. Ten minutes in, Xavier was leading 18-5.

But the Tigers got a boost from a surprising source. Freshman Jakeenan Gant, who had missed the first nine games of the season with eligibility concerns, was cleared to play before the game. He hit his first collegiate shot, a baseline jumper, and later contributed two free throws and a 3-pointer to a 7-0 Missouri run that brought the Tigers within six.

"He came in and just kind of fit right in," Anderson said of the 6-foot-8 Georgia native. "He was aggressive offensively, but he wasn't selfish. He had shots. He took them. He made them and made some plays. There were some points there in the game today where it's the best we've probably moved the ball since we played William Jewell or UMSL (in exhibition play)."

A Johnathan Williams III layup as time expired sent Missouri into the half trailing 32-27.

"We were actually pretty happy we were only down five going into the second half, and we knew we can make a run on this team," Williams said. "We can beat them."

The Tigers continued their surge at the start of the second half, scoring three of the first four baskets. Missouri couldn't breach the one-point threshold, however, and Xavier began to broaden the lead with a 11-4 run.

The Musketeers received a few extra free throws in the midst of that run, when Anderson jumped on the court to argue a call and was given a technical, his first as head coach of Missouri. Ryan Rosburg had driven along the baseline, made contact with a defender and turned the ball over, and Anderson believed he was fouled.

Unfortunately for Missouri, the fire didn't light. The technical came with 13:01 to play, and by the time the clock read 9:30, the Musketeers had the lead back in double digits. They extended it to as many as 20.

"We haven't played a full game yet," Shamburger said. "Last game (against Elon), we played the first 20 minutes, that was good, and the second 20 minutes, that (wasn't). We've got to get a whole game, a whole 40 minutes that's good, and we'll be fine once we do that."

The Tigers struggled to shoot the ball, especially from 3-point range, which had been a safe haven for Missouri shooters of late. The Tigers entered the game making nearly 40 percent of their 3-point attempts but Saturday shot 1-of-16. Xavier, meanwhile, made 8-of-18.

The Tigers did manage to hold Xavier below its average of 83 points, and top scorers Trevon Bluiett, Matt Stainbrook and Myles Davis combined for just two points in the first half. However, Brandon Randolph paced Xavier with 11 first-half points, and Davis went off for 11 points in the second half. Dee Davis contributed 17 points of his own to lead Xavier.

"We really spent a lot of time (on) how are we going to guard Stainbrook?" Anderson said. "Well, we did a good job on him, but we didn't do a good job on Randolph and Davis."

Missouri was led in scoring by Williams, who had 17 points and was one rebound away from a double-double. Gant finished with 13 points in 15 minutes in his debut.

The loss, Missouri's first at home since its season-opener against Missouri-Kansas City, drops the Tigers to 5-5 on the season.

Missouri returns to the court on Saturday against Illinois in the Braggin' Rights game.