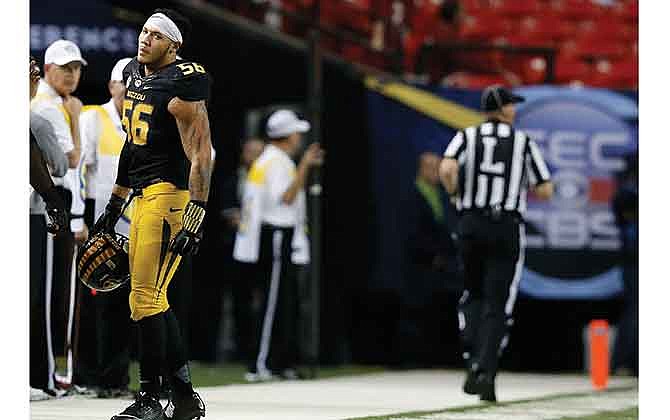 Missouri defensive lineman Shane Ray walks off the field Saturday after being ejected in the first half of the Southeastern Conference championship game after a targeting penalty on a hit against Alabama quarterback Blake Sims in Atlanta.

ATLANTA - Missouri knew its much-heralded defensive line would need to get to Alabama quarterback Blake Sims if the Tigers wanted to win their first Southeastern Conference title Saturday.

Unfortunately for defensive end Shane Ray, his day ended early when he got there too late.

The Tigers' best player was ejected in the second quarter when a hit on Sims was ruled a targeting penalty. Missouri's all-time single-season sack leader watched from the locker room as his team lost its second straight SEC championship game, 42-13.

The Missouri defense allowed a season-high 504 yards of total offense to No. 1 Alabama. The Missouri offense ran for a season-low 41 yards. And for the fourth time since 2007, the Tigers left a conference title game empty handed.

"It hurts," Missouri quarterback Maty Mauk said. "And it is going to hurt for a while. I'd do anything to get the game back, but ultimately I can't, so we've got to wait 'til next year."

The Tigers' defense barely got a chance to fasten its chinstraps before the Alabama offense got rolling. The Crimson Tide took just 3:36 to move 68 plays on their first drive, which ended in a 1-yard touchdown rush by T.J. Yeldon.

Missouri's defense stiffened, forcing two punts and a missed 43-yard field goal attempt on Alabama's next three drives. But the Missouri offense continued to stagnate, and Alabama answered the Tigers' fourth consecutive punt with the a 58-yard strike to DeAndrew White on the play for which Ray was ejected.

Ray disagreed with the call, which came with 11:48 to play in the second quarter.

Missouri scored on the next drive with a 33-yard Andrew Baggett field goal, but Alabama scored once more before half on a 14-play, 75-yard drive capped by a 2-yard Yeldon run.

Ray spoke to his team at the half and encouraged them to bounce back from the 21-3 deficit.

"He just reminded us why we're here," tailback Marcus Murphy said, "and reminded us that we're brothers and we've got to stay together in times like this."

Missouri returned from the locker room to play its strongest quarter in the game. Missouri outgained Alabama by 50 yards in the period and scored twice, cutting the lead to eight.

All three of Missouri's scoring drives were boosted by plays in which Mauk scrambled to find senior receiver Jimmie Hunt on the sideline downfield. The two connected for 32, 63 and 47 yards on those plays, and Hunt finished the game with 169 of Missouri's 272 receiving yards.

"We knew that they didn't do the best job of matching up if Maty started to scramble," said Bud Sasser, who was held to 35 receiving yards. "They kind of jumped that run. Today, Jimmie was able to stay going deep and Maty's just taking off and just launching it and was able to find Jimmie."

The 63-yarder put the Tigers at Alabama's 1-yard line and led to Missouri's only touchdown of the day. The Tigers were unable to inch forward on the first three plays after Hunt's catch, but Mauk found Sasser on a fourth-down slant route to cut the lead to 21-10.

The Tigers forced a punt, and Baggett kicked his second 33-yard field goal of the contest to cut the deficit to 21-13.

The tide turned, however, when the fourth quarter began. Following a five-yard penalty, Alabama scored from 6 yards out on the its first play of the final quarter with a six-yard pass from Sims to Christion Jones. It was the first of three consecutive touchdown drives by the Crimson Tide as Alabama put the SEC championship out of Missouri's reach.

The crowd was largely in favor of the Crimson Tide, whose university is roughly eight hours closer to the Georgia Dome. The Alabama faithful had plenty of reason to cheer, as their team all but guaranteed a spot in the first-ever College Football Playoff.

"We knew it would be like an away game, because "Bama is so close and we have to travel so far," Murphy said, "but we've done good in away environments, so we just wanted to come out and fight like we've done all year."

Alabama is the only SEC team this year to gain 400 yards of total offense against Missouri. Sims finished the game with 262 yards on 23-of-27 passing and two touchdowns, earning the game's most valuable player award in the process.

"You love to see a guy who's gone through what he's gone through, who's worked so hard and always persevered, then have success," Alabama coach Nick Saban said. "It's a credit to his character and work ethic."

Heisman Trophy hopeful Amari Cooper was on the receiving end of 12 of those catches, an SEC championship game record.

Alabama running back Derrick Henry ran for 141 yards and two touchdowns, and Yeldon had two scores as well, though he was held to just 47 yards on 14 carries.

The Tigers were unable to force a turnover for the fourth time this year. Missouri lost all but one of those games.

The Tigers are now 0-12 all time against teams ranked No. 1 in the AP Poll. A win would have brought Missouri its first conference championship since 1969. The 10-3 Tigers will learn of their bowl fate today.