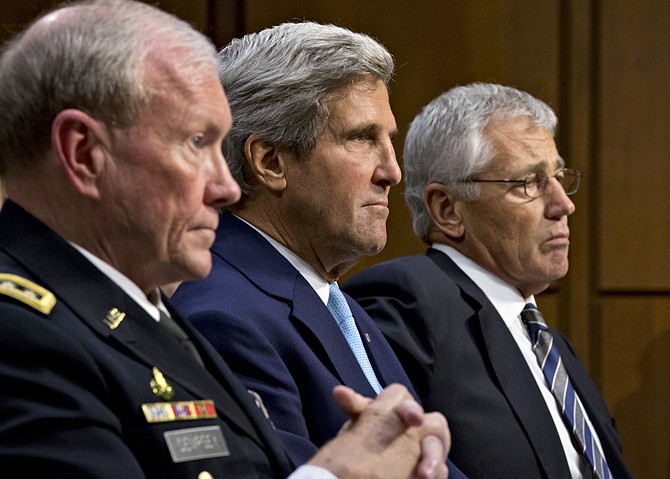 WASHINGTON (AP) - President Barack Obama gained ground Tuesday in his drive for congressional backing of a military strike against Syria, winning critical support from House Speaker John Boehner while administration officials agreed to explicitly rule out the use of U.S. combat troops in retaliation for a chemical weapons attack.

"You're probably going to win" Congress' backing, Rand Paul of Kentucky, a conservative senator and likely opponent of the measure, conceded in a late-afternoon exchange with Secretary of State John Kerry.

The leader of House Republicans, Boehner emerged from a meeting at the White House and said the United States has "enemies around the world that need to understand that we're not going to tolerate this type of behavior. We also have allies around the world and allies in the region who also need to know that America will be there and stand up when it's necessary."

Boehner spoke as lawmakers in both parties called for changes in the president's requested legislation, rewriting it to restrict the type and duration of any military action that would be authorized, possibly including a ban on U.S. combat forces on the ground.

"There's no problem in our having the language that has zero capacity for American troops on the ground," said Secretary of State John Kerry, one of three senior officials to make the case for military intervention at a Senate Foreign Relations Committee hearing.

Obama said earlier in the day he was open to revisions in the relatively broad request the White House made over the weekend. He expressed confidence Congress would respond to his call for support and said Assad's action "poses a serious national security threat to the United States and to the region."

The administration says 1,429 died from the attack on Aug. 21 in a Damascus suburb. Casualty estimates by other groups are far lower, and Assad's government blames the episode on rebels who have been seeking to overthrow his government in a civil war that began over two years ago. A United Nations inspection team is awaiting lab results on tissue and soil samples it collected while in the country before completing a closely watched report.

The president met top lawmakers at the White House before embarking on an overseas trip to Sweden and Russia, leaving the principal lobbying at home for the next few days to Vice President Joe Biden and other members of his administration.

Kerry, Defense Secretary Chuck Hagel and Gen. Martin Dempsey, chairman of the Joint Chiefs of Staff, sat shoulder-to-shoulder at the Senate committee hearing while, a few hundred miles away, United Nations Secretary-General Ban Ki-moon urged caution. He said any punitive action against Syria could unleash more turmoil and bloodshed, and he advised that such strikes would be legal only in self-defense under the U.N. Charter or if approved by the organization's Security Council. Russia and China have repeatedly used their veto power in the council to block action against Assad.

In the Middle East, Israel and the U.S. conducted a joint missile test over the Mediterranean in a display of military might in the region.

Obama set the fast-paced events in motion on Saturday, when he unexpectedly stepped back from ordering a military strike under his own authority and announced he would seek congressional approval.

Recent presidents have all claimed the authority to undertake limited military action without congressional backing. Some have followed up with such action.

Obama said he, too, believes he has that authority, and House Democratic leader Nancy Pelosi said during the day that even Congress' refusal to authorize the president wouldn't negate the power of the commander in chief.

Still, the president also has stated that the United States will be stronger if lawmakers grant their support. But neither Obama nor his aides has been willing to state what options would be left to him should Congress reject his call.

Even some of Obama's sternest critics in Congress expressed strong concerns about the repercussions of a failure to act.

House Majority Leader, Eric Cantor, R-Va., said after Tuesday's White House meeting that a failure to respond to the use of chemical weapons "only increases the likelihood of future WMD (weapons of mass destruction) use by the regime, transfer to Hezbollah, or acquisition by al-Qaida."

Apart from the meeting with Obama, the White House provided closed-door briefings for members of Congress.

Sen. Jeff Flake, R-Ariz., said after attending one session that administration officials told lawmakers that the targets the military had identified last week were still present, despite the highly public discussion of a possible attack. "Seems strange to see some targets still available several weeks later," Flake said, adding that he was "still listening" to the administration's lobbying.

Dempsey addressed the same point later in the day. "Time works both ways," he told the Senate panel. He said the United States has significant intelligence about Assad's actions, and "we continue to refine our targets."

Others were firmly opposed. Sen. Jim Inhofe of Oklahoma said on Fox News, "It may sound real easy when people like Secretary Kerry say that "it is going to be quick and we're going to go in, we're going to send a few cruise missiles, wash our hands and go home.' It doesn't work that way. This could be a war in the Middle East, it's serious."

Democrats, too, were divided, although it appeared the administration's biggest concern was winning support among deeply conservative Republicans who have battled with the president on issue after issue since winning control of the House three years ago.

The United States maintains a significant military force in the eastern Mediterranean Sea. The U.S. Navy released one of the warships that had been in the region, leaving four destroyers armed with cruise missiles, the USS Stout, USS Gravely, USS Ramage and USS Barry. Also in the area was an amphibious warship, the USS San Antonio, with about 300 Marines aboard.