Cliff Manor is a trip back in time 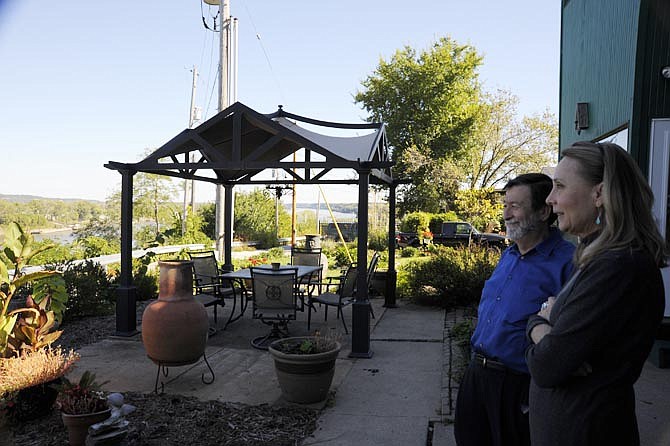 Steve Veile, one of the new owners, and hostess Lenore Abboud admire the Missouri River view from Cliff Manor, a Jefferson City Landmark which serves as a bed and breakfast.

The backyard view of the Missouri River from the Cliff Manor Bed and Breakfast in Jefferson City is as beautiful for today's guests as it was advantageous for the Union soldiers who occupied the site as Fort College Hill during the Civil War. 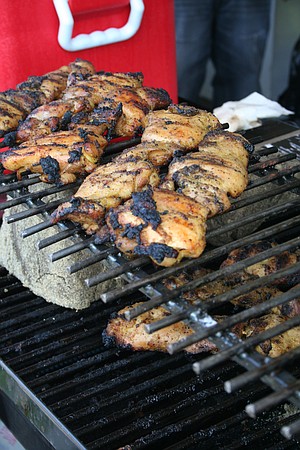 Arnold Krekel bought the large piece of the cliff's edge after being appointed to the federal bench by President Abraham Lincoln, only months before his assassination in 1865.

He purchased the property at auction on the Cole County courthouse steps from Henrietta Bruns, widow of Mayor Bernard Bruns, who founded Westphalia.

Krekel met Bruns at her boarding house, where the High Street U.S. Post Office is today, where he was part of the Radical Unionists group and a leader in the state's German community.

The judge only lived 10 years in the designated city Landmark built in 1866.

While in Jefferson City serving the U.S. District Court for the Western District of Missouri, Krekel also had a hand in the founding of Lincoln Institute as a law professor and benefactor.

Before leaving St. Charles County for the Capital City, Krekel had served as the president of the Missouri Constitutional Convention, giving his signature to the state's emancipation legislation.

"He was the complete package," she said.

Krekel's portrait sits on the mantle in the large sitting room of the manor. It's always a conversation starter for guests.

"It's fun to learn the history and then share it with guests; I like the discoveries," Abboud said. "Krekel's story is pretty new."

Even one of the new owners, Steve Veile, who has been involved with local historic preservation efforts for decades, had not heard Krekel's story until his company Communique bought the property in March.

It has operated as a bed and breakfast for at least 15 years and also served as a multi-family residence for several decades.

When the manor was built, its nearest neighbors were the buildings today housing Architects Alliance and Paddy Malone's at the corners of Bolivar and Main streets, as well as the Conservation Federation's small, stone office in the 700 block of Main Street.

The home was built in two stages, apparent from the change in brick and stone building materials.

And historic photos show the makeovers the home's front has seen, from an enclosed front porch to a once long, private drive eventually developed into an entire residential block.

A copy of the 1868 Bird's Eye View map hangs in the foyer, showing the home's beginnings, including the summer kitchen which still stands beside the home.

From the front porch, one can see the small, white pillars which once lined the home's driveway when its original address was 722 Main St.

Local tradition holds that tunnels from the home led to the river's edge as part of the Underground Railroad.

The new owners recruited a local tunnel enthusiast to do some exploring.

About halfway down the cliff, there is evidence of an opening and period pottery.

But, Krekel built the home after the Civil War.

However, the judge's abolitionist views were not popular in Missouri.

So another possibility for the tunnel might be an escape route for the owner, Veile said.

"As a bed and breakfast, the home can retain its history," Abboud said.