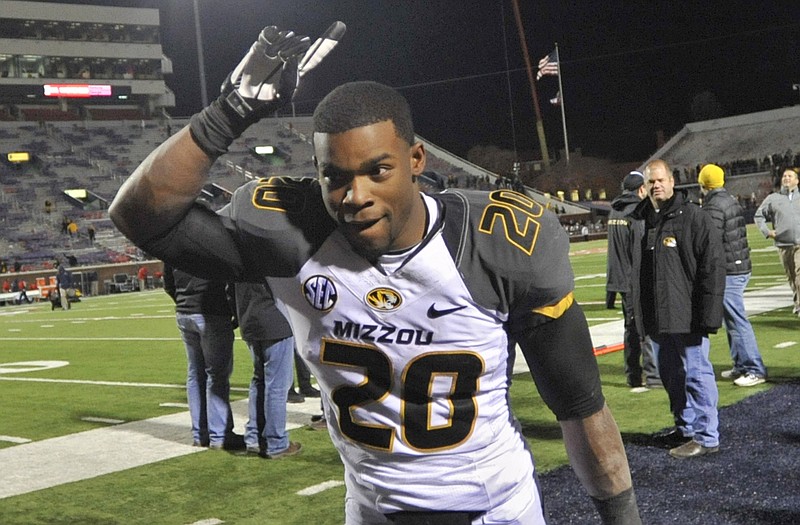 Missouri running back Henry Josey jogs after the field following the Tigers' 24-10 victory against Ole Miss in Oxford, Miss.

COLUMBIA - This wasn't possible. No way, no how.

The Missouri Tigers didn't belong, couldn't compete. The proof came in its inaugural season in the Southeastern Conference, as a battered and bruised Missouri team limped to a 5-7 record and mustered just two league wins.

But here they are a year later, one game from an SEC East Division title. A trip to Atlanta for the SEC title game, a BCS bowl berth and a spot in the national championship game all remain legitimate possibilities.

"The flux of the change is definitely interesting and has a magnitude we can all recognize," Missouri senior left guard Max Copeland said. "That came at a price, it didn't just happen. We paid the price to be here. We're just collecting our check. We've already paid what it takes to be here, but we've paid greater than what we've received still, and we still have return on our investment left to pick up."

"We've got a chance to win an East championship," Missouri head coach Gary Pinkel said. "That's the first goal to better things. It's exciting, it's fun. I want the players to have fun, I don't want them to be tight. If you go out and have fun and you're not thinking, you play better. Just because, "Oh, it's the championship game now,' we don't want that. I'm not going to talk about that very much. It's all clutter."

Sure, it's all clutter. But who would have thought Missouri would be in this position? The Missouri coaches and players might be the only ones.

"It's not something that is a total surprise to a lot of us, but it's definitely a good feeling after last season," senior quarterback James Franklin said.

Missouri controls its own destiny in a way. A win against Texas A&M gives the Tigers the SEC East title and a place in the SEC championship game. A win there guarantees Missouri a BCS bowl berth.

"We don't like anything given to us," center Evan Boehm said. "We knew coming into this year nothing was going to be given to us. All the other teams this year had injuries like we had last year. They counted us out, but we are coming out right now and we are focused on what is in front of us and that is Texas A&M. We are excited to go out there, and we are excited to play this week."

But a win against Alabama or Auburn doesn't guarantee the Tigers a chance to play for a national title. The Tigers would likely need either Florida State or Ohio State to lose to get that shot.

So Missouri needs a little help to achieve the loftiest of goals. But the Tigers are all on their own to do more than anybody could have imagined this season.

A win Saturday would give Pinkel his 101st win as the head coach at Missouri, tying him with the legendary Don Faurot for the most victories in program history.

"I'll talk about it more when it happens," Pinkel said. "There's a lot of people that are a part of all of this. I never did this to break records. I did this because I had a responsibility to the University of Missouri to build a great program. It's real important to me that people in the SEC have great respect for Missouri football. It's real important to me that nationally people respect Mizzou football. That's my goal. That's what I do this for."

Missouri certainly has a lot to be thankful for. The Tigers will be counting those blessings together Thanksgiving Day. Missouri will have an early-morning team meeting and practice until about 11:30 a.m. before hosting a mandatory Thanksgiving meal for the team.

Many players from around the state will grab some food and head back home, often times taking players from more distant locales home with them, before a mid-afternoon return Friday.

Missouri redshirt freshman nose guard Harold Brantley was named the SEC special teams player of the week Monday. Brantley blocked a field goal during Missouri's 24-10 victory against Mississippi on Saturday, but also took a direct snap on a fake punt from Missouri's 20-yard line in the third quarter and ran for a 26-yard first down. It's the 11th SEC honor for a Tiger this season.

"He said he thinks he should be the short-yardage goal line running back, and he probably should," Pinkel said of Brantley. "That might come later, next year."