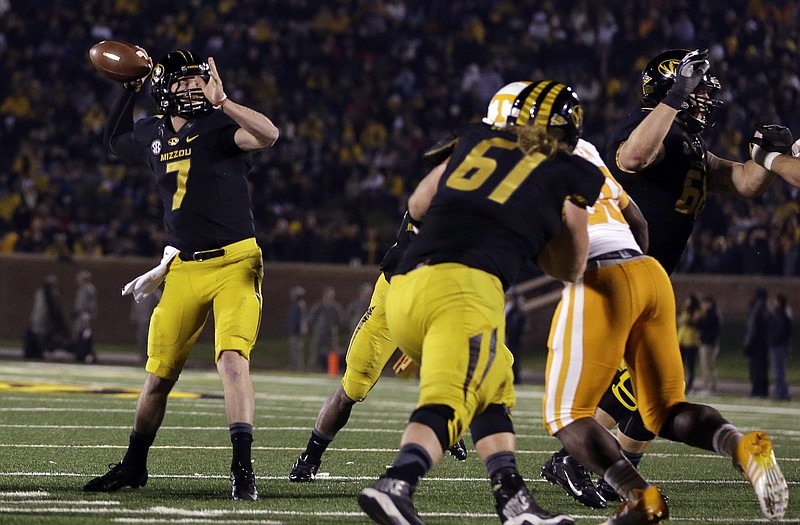 Missouri quarterback Maty Mauk, shown dropping back to pass during the Tigers' game against Tennessee on Nov. 2 in Columbia, is in the midst of a stellar freshman season.

COLUMBIA - Maty Mauk is a step ahead.

Ahead of James Franklin. Ahead of Blaine Gabbert. Ahead of Chase Daniel.

Franklin, Gabbert and Daniel, on the other had, playing sparingly - with mixed results - during their freshman campaigns before going on to illustrious careers as Missouri signal-callers.

That leads one to wonder what the future has in store for the suddenly seasoned Mauk.

"Maty's done a great job," Missouri head coach Gary Pinkel said. "We all know that. Who doesn't know that? We're very fortunate to have a backup quarterback going in with the schedule we've had, with the level we've had, with so little experience and play the way he has."

Let's compare Mauk's freshman season with that of the other three, starting with the most recent.

• Franklin played in 10 games - zero starts - as a true freshman in 2010, completing 11-of-14 passes for 106 yards with one touchdown and one interception. He also rushed 23 times for 116 yards and two scores while playing understudy to Gabbert.

Franklin has gone on to put up some of the best numbers ever for a Missouri quarterback. He still has a pair of games - at Mississippi at 6:45 p.m. Saturday (ESPN-TV) and home against Texas A&M on Nov. 30 - to add to his already impressive resume. The senior currently ranks third in Tiger history in total offense (7,619), fifth in passing yardage (6,110), third in passing touchdowns (46) and second in passing efficiency (139.3).

• Gabbert played in five games - zero starts - behind Daniel in 2008, completing just 5-of-13 passes for 43 yards with no touchdowns or interceptions. He ran the ball six times for 22 yards.

Gabbert went on to throw for 6,822 yards in a combined three seasons with the Tigers, tossing 40 touchdown passes to 18 interceptions. He also rushed for 458 yards and eight scores. Gabbert left after his junior season and was selected 10th overall in the 2011 NFL draft by the Jacksonville Jaguars.

• Daniel played in 10 games - zero starts - behind Brad Smith in 2005, completing 38-of-66 passes for 347 yards and one touchdown with two interceptions. He also rushed for 57 yards with a score.

Daniel went on to throw for 12,515 yards with 101 touchdowns to 41 interceptions. He was a Heisman Trophy finalist in 2007, finishing fourth, after leading Missouri to a No. 1 ranking before falling in the Big 12 championship. After going undrafted in 2009, Daniel was picked up by the Washington Redskins before spending time with the New Orleans Saints. He's now the backup in Kansas City.

Mauk was supposed to follow that precedent. Play a series here or there while letting Franklin run the show. That all changed when Franklin went down with a sprained right shoulder against Georgia, thrusting Mauk into the spotlight.

"I think I've done pretty well," Mauk said. "I did what they needed me to do. I definitely got a lot of experience and things I needed to work on done. It also gave me a bunch of stuff I do need to work on. It's been a tremendous little stretch right there. We still have 2-4 more games left that we can still get better at."

The most important thing he learned during his time as a starter?

"The biggest thing is I got the game to slow down," Mauk said. "When I was thrown in against Toledo, I got two sacks on me. It was faster then, and now that I've been in there playing a lot, it's easier to go through reads and everything slowed way down."

So as Franklin's eligibility runs up at the end of the season, Mauk is all but guaranteed to be the starter heading into 2014.

What a head start he's had this season.

"It's been a tremendous help," Mauk said of his experience this season. "Now that I've been going against the Floridas and the South Carolinas it's definitely going to be a big help, especially going into next year."