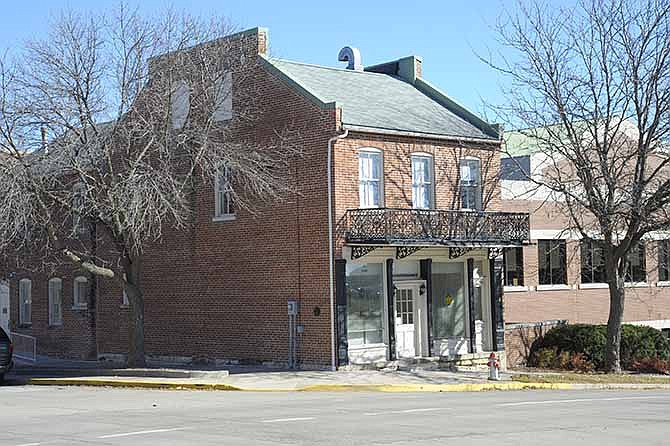 The Capitol Police moved into the historic Richmond Hill Grocery building nearly two years ago, giving them expedited response time to many of the 90-plus state office locations in Cole County, particularly the Missouri Capitol.

Jefferson City's Millbottom was "one of the most interesting, multi-dimensional historical neighborhoods," said author and historian Gary Kremer.

By the time the Bolivar and Main streets area reached its peak of growth and stability at the turn of the 20th century, the Richmond Hill Grocery was at the heart of this mixed-use area, settled primarily by first-generation German immigrants. 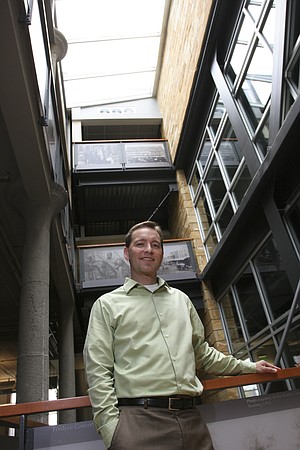 Photo by Shannon Sturgis
Local architect Reese Rowland has designed buildings all over central Arkansas, including the Arkansas Studies Institute.

"Grocery stores once were important neighborhood institutions," Kremer said. "They were within comfortable walking distance from one's home, they were operated by trusted neighborhood residents, and they were as much places of social interaction as they were places of business."

The corner of Bolivar and Main has served as a neighborhood business center since the Civil War, some properties serving the union troops at Fort College Hill.

By the late 1970s, the Urban Renewal Capitol West Project cleared most of the grocery's Millbottom neighbors, except the Byrd-Haar-Bergman House, a fellow Landmark, which was relocated from 614 W. Main St. to 110 Bolivar St.

Still standing across Bolivar Street from Richmond Hill Grocery is Paddy Malone's and across Main Street is the Porth House, both city Landmarks, as well.

In the Millbottom's heyday, about the time the first Missouri River bridge opened in 1896, on the fourth corner stood John Bruns' Staple and Fancy Dry Goods store, Kremer said.

Other Landmark neighbors include Rotary Centennial Park, the Cliff Street Manor and the Stone House.

Originally, the state eyed the Millbottom replacement for a 175,000-square-feet social services complex, which would include a privately operated day care, according to a July 1985 News Tribune article.

But the state's initial plan said it would neither buy nor remove the historic grocery store, where Columbia College offices were housed at the time.

A year later, the state shifted to the construction of what is now the secretary of state's offices and the state library, among other uses. Roy Blunt, who was secretary of state in 1986, said the rented warehouse space was "entirely unsatisfactory" and proper protection of state records and archives was imperative.

In September 1987, the state changed its mind. The grocery building was targeted as the site for a tourism information center when the Missouri General Assembly appropriate $86,000 for its purchase.

At the same time, the city focused improvements to West Main Street, including widening the street, new sidewalks and ornamental medians, "provide a grand entrance to the west side of the Capitol," a Daily Capitol News article said.

The State Information Center construction used limestone and brick to marry the exteriors of the Capitol and Truman Building with the German vernacular of the surrounding neighborhood.

The 1980s was an era of rapid construction projects for the state, including the parking structures west of the Capitol and at the corner of State and Monroe streets, new office buildings in St. Joseph and Kansas City, the Truman State Office Building, the Labor and Industrial Relations offices on Truman Boulevard, renovations to the Jefferson State Office Building and debate over the eventual Veterans Memorial and the Governor Office Building came on the radar.

Capitol Police moved into the building nearly two years ago from the basement of the Truman Office Building.

"To us, this is a much better police environment," said Chief Todd Hurt. "Distance-wise from the Capitol, it's a little farther; response-wise, it's closer."

In addition to immediate access to response vehicle parking, the police have efficient storage areas.

They also have windows. Not only does that create a more pleasant work environment, it keeps them informed of potential response conditions.

The slender, two-story brick building offers six office spaces. It is enough for the police needs, as the dispatcher remained at the Truman building and the police have offices at other sites.

It shares a stairwell with the State Information Center, similar to being in close proximity to state agencies in the Truman building.

"We didn't need more space, we needed to be in a better position," Hurt said.

The Capitol is the agency's most critical mission. From the Main Street office, they can respond faster than from the basement of the Truman building.

"There's no easy way to get from the Truman building to the Capitol without walking," he said.

On any given work day, the department is responsible for the safety of about 90 buildings and more than 18,000 state workers in Cole County.

Capitol Police has had several other locations in its approximately 40 years. But Hurt said he hopes to retire from this one.

Although he was skeptical about moving into a former day care, Hurt said once they were in, it has made a lot of sense.

Many of the state buildings the Capitol Police protect are historic, as well.