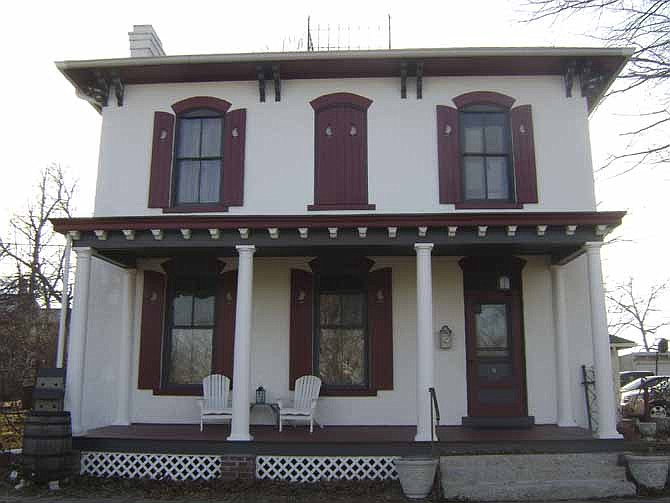 After nearly two years of historic preservation and detailed restoration, Michael and Laura Ward's efforts to revive the Nelson and Gertrude Burch House at 115 W. Atchison St. have been recognized with the Jefferson City Landmark designation and Golden Hammer Award.

One of the oldest homes remaining in the Old Munichburg neighborhood, the Nelson and Gertrude Burch House has received much attention this year.

The Historic City of Jefferson celebrated the Wards' efforts with the May Golden Hammer award.

Since 2008, the local historic preservation organization has recognized 31 such efforts. The awards program is designed to spotlight successful renovation projects that have enhanced the neighborhood, updated a building for modern use and maintained the community's architectural heritage.

"Our community is fortunate that Laura and Michael Ward fell in love with the house and, with their knowledge and love of old home restoration, have restored the house with sensitivity to the historic architecture," said Deedie Bedosky, Golden Hammer chairwoman. "Their work has protected a historic property that needed much attention and repair, and has given Jefferson City another historic architectural jewel."

And this week, the city's Historic Preservation Commission bestowed the Landmark designation on the historic home.

The two-story, single-family home holds true to its appearance when it was constructed in 1868 for the Burches.

Nelson Burch and his brother Oscar bought five acres at the corner of Jefferson and West Atchison streets following the Civil War in 1865.

They both built homes on top of the hill overlooking the fledgling German side of town and the Capitol. Oscar's home is around the corner on Jefferson Street.

Local historians suggest the Burch brothers may have incorporated boyhood memories of growing up in Auburn, N.Y., where the Italianate style was popular.

In addition to sharing the same architectural style, the brothers' homes have identical curved, walnut staircases.

Nelson Burch was clerk of the Missouri Supreme Court and his brother Oscar served there as his deputy.

He also published the city's first daily newspaper, the State Journal, and his brother was the associate editor.

Eventually the publishing business expanded to include the state printing contract and the State Journal Company, which depended on a contract with Missouri State Penitentiary officials, was established. But it was short lived as public sentiment grew negative toward use of prison labor.

Elizabeth Wagner and her daughter Antonia Zuendt bought the home from the Burches in 1888.

The mother and daughter were widows following the December 1881 train wreck near Russellville. Christopher Wagner, Elizabeth Wagner's husband and Antonia Zuendt's father, was killed instantly along with Green C. Berry and two other prominent businessmen.

However, Christopher Wagner, a second-generation Missouri-German and the son of a brewer, did not leave his family without means. He obtained substantial wealth during the 1849 California Gold Rush.

In 1913, Antonia's son William E. Zuendt and his wife, Frederica, built the Colonial Revival house at 920 Jefferson St., and during the next half-century, they developed much of that city block.

The house passed through four other owners before the Wards bought it in 2011.