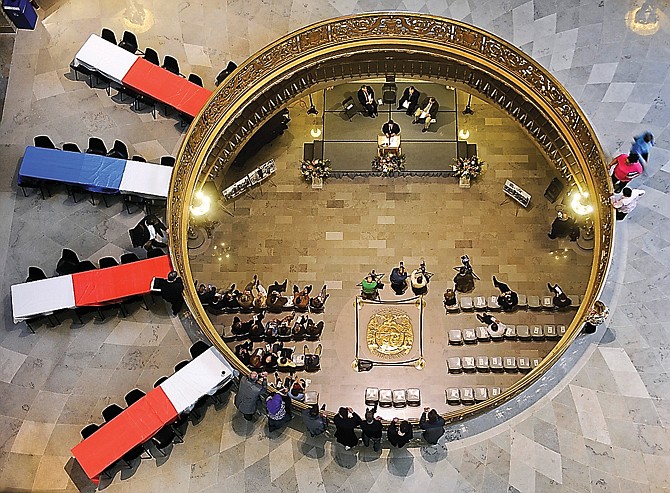 No shovel was used and no dirt was turned - this time.

But a century ago, a crowd gathered at a now-unmarked spot on the Missouri Capitol grounds to watch as the earth was broken for construction of Missouri's newest Capitol - the one still in use today.

"(This) amounts to the second event that celebrates the centennial of this Capitol," broadcaster Bob Priddy - who served as master of ceremonies - said at the beginning of Monday's program marking the anniversary of the groundbreaking.

"A little over two years ago, the first centennial event was held - the observance of the night, Feb. 5, 1911, when a lightning bolt made all of this possible, when it struck the dome of the Capitol and started a fire that gutted that building."

Senate Floor Leader Ron Richard, R-Joplin, was a House member when he began thinking of ways to observe the Capitol's 100th birthday.

"This building is, arguably, the most splendid, tangible public inheritance that has been passed on from our ancestors," Richard said. "I can think of no more beautiful, and meaningful, place to work in the state of Missouri."

The present Capitol is the third "permanent" capitol in Jefferson City and is substantially larger than the building it replaced.

The 1840 Capitol - the one destroyed in that 1911 fire - faced east and west and sat closer to the river, while the current building faces north and south.

The 1840 building's south end stopped about where the present Capitol's north hallway, the one closest to the river, runs.

A lot more wood was used in the previous building, while the current structure mainly contains white limestone from Carthage, known as "Carthage marble."

Both Priddy and Richard noted that the 1911 fire renewed efforts by some people and groups interested in moving the state's capital away from Jefferson City - a community, Richard said, "that many regarded as too remote, too small and, frankly, too unsophisticated for a state capital."

But voters on Aug. 1, 1911, by a more than three-to-one margin, approved a $3.5 million bond issue to design, build and furnish a new capitol in Jefferson City, making it the permanent seat of government.

The current building has lasted the longest of the three in Jefferson City.

Speaker Tim Jones, R-Eureka, said: "The building's longevity is, truly, a testament to the craftsmanship that went into its construction."

Jones said he and many others, on a daily basis, also "continue to be awe-struck by the architecture and the artwork that is on display in this, the crown jewel of our state, a cathedral of democracy."

But, Jones added - and Priddy later agreed - the Capitol hasn't received all of the maintenance it should have over the years, and there are many projects that need to be addressed to restore the building's condition.

"Governors a hundred years ago in the state of Missouri looked at a very different state from the state we see today," said Gov. Jay Nixon during Monday's ceremony.

"A largely rural state, connected by train service rather than highways, with communication by newspaper and over telephones that were still few and far between - mounted in a box on the wall and not carried around in your hand.

"Social media was considered sitting on the porch swing and talking with your neighbor."

Still, Nixon said, Missouri 100 years ago "held the promise and opportunity of this wonderful place that we call home."

About the Capitol, Richard said: "It is worth remembering - a century after the fact - that this building was made possible because members of both political parties decided to come together and work for the good of the people that they were elected to represent. ...

"It reminds us that good people ... can work together to achieve worldly goals. That alone makes this commemoration ... worth celebrating."