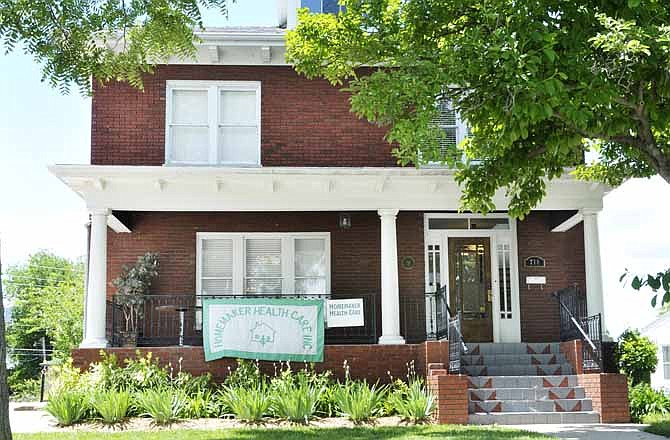 The Watts House at 718 E. Capitol Ave. in Jefferson City is the recipient of a City Landmark Award.

The model of a middle-class home in the first half of the 20th century, 718 E. Capitol Ave. was recognized as a City Landmark in May.

It joins more than 80 other homes and architectural icons reflecting the community's history and progress across more than 150 years.

The Watts Home is named for Hampton and Cornelia Watts, who had the home built in the early 1920s.

Hampton Watts owned Watts Shoe Company at 102 E. High St. in 1923, and by 1927, the Jefferson City Directory lists him as the manager of Protecto Garment Company.

The 1930 U.S. Census lists Hampton at age 51 as an assistant sales manager at a clothing factory. Cornelia was 42, and their daughter Mary was 13.

Also living with them at that time were sisters-in-law Ruth Jones, 38, and Mary Jones, 36, who were employed as an insurance agent and a state office stenographer, respectively. And, the family also kept "lodgers" at the time.

By 1935, Hampton Watts was a manager at the Jefferson City Mattress Factory, and Cornelia was a stenographer at the Highway Patrol.

Mary Morton Watts married Robert Lloyd Morris in the living room of her childhood home at 718 E. Capitol Ave. The altar was improvised at the fireplace, and the bride was escorted down the stairway.

Cornelia Watts owned the home until 1967, renting it out while living at 712 E. Capitol Ave.

Dave and Cathy Bordner purchased the home 34 years after Cornelia Watts sold it. A historical renovation kept the original floor plan and interior features while updating the utilities.

The building has been leased as office space since renovations were completed in 2004.

This neighborhood closest to the prison site was a friendly community, where families and businesses interacted well with their neighbors, Bordner said.

Those who lived in the 600-700 blocks of East Capitol Avenue and the 200 block of Cherry Street about a century ago included mayors, lawyers, newspaper editors, doctors, builders, businessmen, railroaders, a prison guard, engineers, state workers and entrepreneurs with factories inside the prison.

Although the prison opened in March 1836, the neighborhood did not grow much until after the Civil War.

The late Henry Guhelman grew up at 211 Cherry St. and was friends with Mary Morton Watts.

In an interview with Bordner, Guhelman recalled, "Mr. Watts was a wonderful man, and Mrs. Watts was a lovely lady with a real Southern accent."

"They did not worry about the prison," Bordner said. "The presence of the guards kept the neighborhood safe."

These Stewart daughters remembered playing tennis at the court behind the Warden's House, 700 E. Capitol Ave., while Warden Elbert Nash and his family lived next door at 722 E. Capitol Ave.

Although there were few escapes from the prison, Dawson recalls visiting a friend on McCarty Street, where a door-to-door search for an escapee discovered him in that basement.

The night of the prison riot in September 1954, the Stewarts walked home from a movie to find their street lined with patrol cars. Later, what disturbed Mrs. Stewart more was hearing the gunshot of Warden Nash's suicide in December 1964 during the Department of Corrections Christmas party.

Ron Bowman, who was called to serve with the Missouri National Guard during the riot, and his wife, Eileen, lived at 718 E. Capitol Ave. for two years in the early 1970s. They loved the house and appreciated how all services and conveniences were within walking distance, Bordner said.

"The worse criminals in the state were housed within the walls of the Missouri State Penitentiary," Bordner said. "And yet, very decent people made their homes outside of the prison."