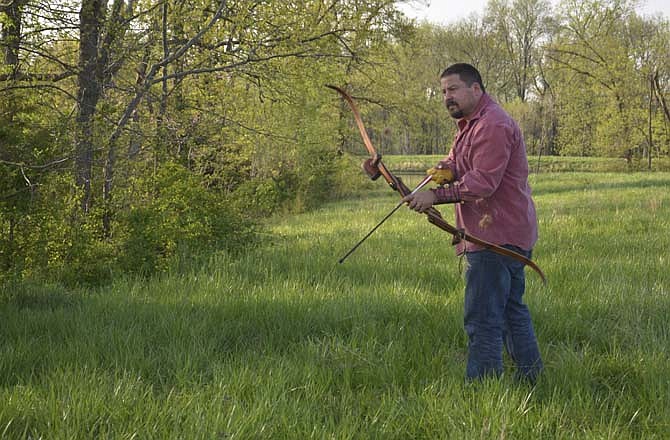 Brandon Butler picks a spot while handling a heavy and quiet recurve bow.

Silence is part of the essence of bowhunting.

Each time we step into the field, we enter a world where stealth, patience and precision are rewarded. Steps are calculated, time slows down and after sitting still long enough, we blend into the environment around us.

Making noise just doesn't seem right. It's the reason people always whisper on television after shooting an animal. You know and they know that they could go ahead and speak up, but doing so just doesn't feel right.

As long as I have been shooting a bow, which is pushing 25 years now, the quest for quiet has raged. We've thankfully progressed from the early days of five-pound stabilizers and big, puffy string silencers, but since perfection can never be achieved, attempts to push the needle ever closer remain constant.

With bows today firing arrows faster than ever, the concern for quiet sometimes takes a back seat. This is a mistake. Even the fastest bows, those shooting over 300 ft/s, are nowhere near the speed of sound, which is 1,126 ft/s at sea level with a temperature of 68 degrees.

So why is quiet important? Well, imagine you're walking down a dark alley late at night. There are noises going on all around you - a horn honks, sirens are blaring, a door slams, a woman yells, a gust of wind rushes past. You're filtering these sounds as you nervously make your way through a potential danger zone. You're on edge and your senses are sharp, so if a sudden loud boom or crack were to take place within 40 yards of you, chances are you'd jump.

You know how a deer's ears go up when they are on alert, like when they raise their head up above the beans to survey their surroundings? They're filtering sound to listen for danger while also looking for it. You don't want to shoot at a deer when they're in one of these moments. They're too alert, even for a fast and quiet bow.

You want to shoot when their head is down during a moment of relaxation. But we don't always get what we want and sometimes we have to shoot when a deer is on alert. In these do or die moments, a quiet bow is important.

The importance of a quiet bow increases with yardage. The closer the shot, the less time an animal has to react to the shot, lessening their chance of reacting in time to get out of the way of your arrow.

I'm not one of those fellas who feel confident loosing an arrow at an animal beyond 50 yards. And for me, 50 yards is pushing it. I'm not saying I've got anything against a guy shooting farther if he ethically can, I'm just saying that the closer the animal, the less chance of a string jump. Those of us shooting animals at closer distances don't need to worry as much about bow noise as those picking animals off the horizon. So finally, there's an advantage to not being able to shoot worth a lick.

Brandon Butler is an outdoors columnist for the News Tribune. Contact him at [email protected]