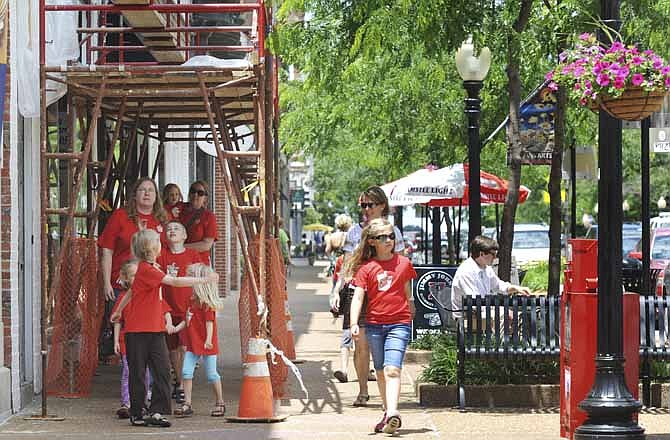 Students and leaders from First Presbyterian Vacation Bible School aren't fazed by the scaffolding as they walk through the downtown area Friday. Downtown Jefferson City is undergoing revitalization, some of which includes changing storefronts, such as here at Coffee Zone.

People often are their own worst critics. When it comes to Jefferson City, is this true for its residents as well? Although leaps and bounds have been made in many historic areas of the Capital City, it sometimes takes a stranger's perspective to reveal the progress.

When driving the streets of Jefferson City for the first time, out-of-towner Eric McAfee recognized that this downtown is different than others he's visited. The itinerant urban planner/emergency manager shared his initial impression of the Capital City in his blog, "American Dirt," pointing out what many Jefferson Citians may have overlooked in the everyday.

"Jeff City's downtown stands out in that, like the even smaller downtown of Frankfort (capital of Kentucky), most of the old buildings are still standing," McAfee writes.

McAfee explores the revitalization of downtown areas all across the country. When looking at Jefferson City with a fresh eye, the blogger praised the efforts of revitalization along East High Street.

In a recent interview, McAfee noted that Jefferson City does face challenges - one of only five state capitals receiving no direct access from an interstate and just 30 miles from a more populous college town - he also noted from his initial visit he could tell revitalization has been a priority, in turn attracting visitors.

"Not only are virtually all the retail spaces leased, but, in contrast to so many other American main streets, Jefferson City lacks many significant "gaps in the teeth' - spaces where one of the contiguous old commercial buildings faced a demolition team," the blogger writes.

Jefferson City has many parts: old and new, east and west, business and residential, etc. Although the city has expanded in many directions over the years, revitalization is an ongoing process. Looking at the city as a whole, downtown has been a major focus over the past 10 years.

Mark Mehmert, community development director of the Jefferson City Area Chamber of Commerce, said the efforts of revitalization bring character and authenticity back to the community, as well as bringing more productivity.

"Older portions of town, if they aren't revitalized, they continue to be a drag on the Jefferson City economy," he said.

Because of efforts by organizations such as the Downtown Business Association, Old Town Revitalization, East Side Business Association and Old Munichburg Association, in conjunction with the City of Jefferson and Chamber of Commerce, older parts of town have been, and are currently, being brought back to life. Also taking shape is Old Munichburg, the efforts made on East Dunklin Street and the revitalization of Warwick Village.

Ash Street has seen significant changes in recent years as well, with pioneers like Juanita Donahue leading the way to redevelopment starting with The Kuellen Mercantile at 900 E. High St., now O'Donoghue's Steaks and Seafood.

Mehmert noted that all the revitalization is a team effort; no one person or organization can do it alone. He said the catalyst to downtown's journey to today started with new lighting and sidewalks. Old Munichburg has also seen similar changes.

"That told the rest of Jefferson City that downtown was open for business. It really set the stage," Mehmert related.

Helping to boost the interest and show off some of the hidden potential of older buildings was the recently held annual Hidden Spaces, Secret Places tour. The tour has generated several improvements over the past three years, including apartment space above Coffee Zone, the restaurant space of J. Pfenney's Sports Grill & Pub, the Walker Building on Ash Street, Divinity Religious Gift Shop and the Art Bazaar, among many others.

"Downtown and the core of Jefferson City is improving. It didn't decline in a short period of time, and it's not going to improve like that either," Mehmert noted.

Donna Deetz, who, along with her husband, Michel, has invested in several building renovations. They have had buildings featured in the Hidden Spaces tours.

The Deetzes are focusing on their Ash Street properties at this time, renovating nine apartments into six new apartments in the old Fairview Hotel. When asked why Donna and Michel took on the renovating task, she stated, "It needed to be done."

Donna would encourage others to take on rehabilitation, in a historically accurate manner.

"If we are going to bring Jeff City back to what it used to be, we need to bring the East Side back up," she explained.

Mehmert agreed, "It is gratifying to see the amount of redevelopment, but there are still places that need that investment. There are properties with great potential. We need to build on what we've already established."

Although McAfee didn't visit all of Jefferson City's historic areas, his observations suggest that progress is evident to outsiders.

"... Jefferson City should be proud of what it has achieved. Downtown looks good. The buildings are in good shape. Virtually none have yellowed newspapers in the windows or are filled with junk that shows they are nothing more than a store room," McAfee wrote.

McAfee also makes an interesting point in regards to the opening of Jimmy John's along the downtown corridor. "Such an establishment may seem unremarkable for a small-town main street, especially one so close to a state capital that houses hundreds of daytime workers who demand lunchtime options nearby. But Jimmy John's is not a common occupant of 19th century downtown commercial buildings in small cities.

"It's a major boost for Jefferson City - an indication of the franchise's confidence that downtown denizens could sustain his or her business ..."

Mehmert said that while Jimmy John's is a great addition, it wasn't something the chamber specifically went looking for. He said the "old town" feel, eclectic and nostalgic, doesn't always fit well with chains or franchises. However, if or when a chain comes calling, the chamber won't be turning them away.

McAfee also touches on this subject, saying "we must throw conventional main street revitalization out the window." Although the ambition of many main street organizations is to attract an eclectic mix of local entrepreneurs, "mom-and-pops simply lack the equity to weather very many periods of slow business, and thus they come and go routinely."

"If East High Street never attracts another chain restaurant, that's OK - in fact, it might be good for building a profile of a place that really can support the "unique discovery of old shops intermixed with new finds' it proclaims on the website. And if it gets a few more chains, that's fine too - it reaffirms the ability for these historic buildings to attract tenants with greater capital," the blog states.

The Indianapolis blogger asked the question, "Can every smaller city in America pull this off with their downtowns?" His answer, "Jefferson City has one great advantage to most Missouri communities: it's the state capital and close at hand is a huge employment source that isn't likely to relocate."

"The current conditions perfectly capture the timeworn phrase "never let perfect be the enemy of the good.' I don't want to tell the leadership of this handsome state capital to lower its aspirations, but it must recognize that the fact that virtually all of the historic buildings are in good condition, occupied and adjacent to a perfectly manicured streetscape places Jefferson City among the top quintile of downtowns for American cities of its size."