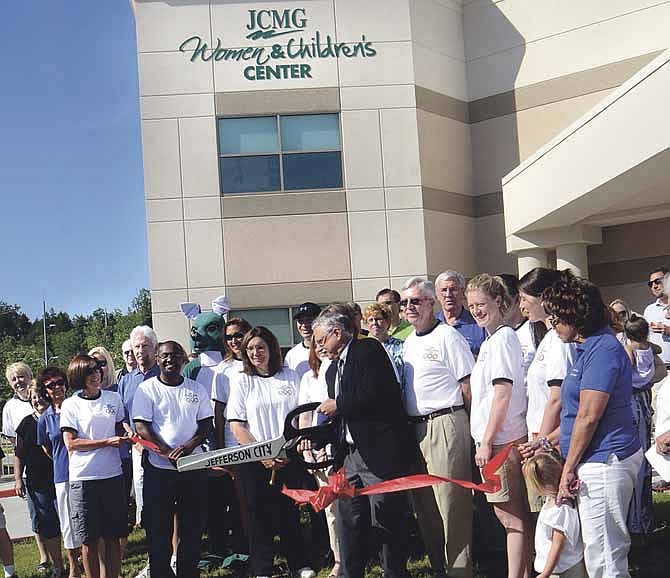 Three of the largest health care entities in Jefferson City - CRMC, St. Mary's Health Center (SMHC) and Jefferson City Medical Group (JCMG) - have either recently expanded, are currently in the process of building an entirely new facility or are in the beginning stages of planning expansion.

JCMG hosted a grand opening of its new Women and Children's Center Saturday at its main campus, 1241 West Stadium Blvd. The $4.5 million addition to the complex houses JCMG Pediatrics as well as the Women's Clinic of JCMG.

Emily Mantle, community relations coordinator for JCMG, said nearly 30 local subcontractors worked on the project and over the past year of construction, the project employed more than 250 workers at any one time.

With the addition to the building, the medical group brought in several new physicians to better meet patients' needs.

SMHC is currently building a new $200 million facility at Highway 179 and Mission Drive. Construction on the facility began in July 2012 and is expected to be completed in late 2014, with the hospital relocating from its current site at 100 St. Mary's Medical Plaza in January 2015.

CRMC announced in May a $35 million expansion to its main Jefferson City campus at 1125 Madison St.

The expansion will add 115,000 square feet to the existing hospital, increasing space by a third. It will also add 30-35 physicians, and increase hospital staff by nearly 100 employees.

Ground will be broken on the project in early fall and the expanded facility will open in spring 2015.

Luebbering said CRMC's goal is to use nearly 100 percent of a local workforce for the project.

"If a project gets to a certain scope, sometimes you have to get bigger companies in here other than what's here locally," he said. "We think we can avoid that. So we're looking at, if at all possible, the majority of the work being done here local."

SMHC construction project manager Tim Gunn, who is with construction company Alberici, said that for the construction of the new SMHC facility on Mission Drive, he expects workers will expend one million work hours on the project and 75 percent of the work hours will be completed by tradespeople from the local area, including Cole and surrounding counties.

"Then you think about it in terms of another 300,000 man hours being expended by hospital workers and management staff who are coming in from out of town over a 24-30 month period," said Perry Hirtz, project director for Northstar Management, the company managing the entire project. "Those dollars that they spend in finding accommodations here and food and other incidentals while they're here, are probably easily six figures plus."

He said he wouldn't doubt if the amount breaks more than $1 million.

"I know my firm alone in the five years we've been coming here, are already approaching $100,000 of those types of costs," Hirtz said.

John Fougere, Director of Communications for Missouri Department of Economic Development, agreed the expansions of these facilities "employ hundreds of construction workers at a time when that industry nationwide is still recovering from the recession and housing crisis."

Tony Houston, executive vice president and chief operating officer at SMHC, said in terms of the construction's impact on the local economy, one must also think about the Highway 179 interchange at Mission Drive and the expansion of the local water district in that area.

"Before the project was approved, we didn't have that interchange," Houston said.

Hirtz said with the total of all the project costs, construction and development fees, and professional services, the interchange cost $12 million.

"Also, they're about to build a new (water district) well and tower just south of the new facility," Hirtz said. "A large addition of a public water main was installed both to support the hospital and the developing area. I believe those dollar values were in excess of $2 million."

"We're hoping that more people come join us in the new location," he said. "When you build a hospital where we're building, you've got some land to grow, and usually folks will join you out there.

"I'm hoping there's more to come for the community."

Hirtz said from his experience, within four years of construction of a new hospital, commercial development will spring up in the area.

"It does seem to be an anchor that starts to drive other things," he said.

Jefferson City Chamber of Commerce President Randy Allen also weighed in, noting that not only does construction contribute to the local economy, these institutions are drawing people from other cities and counties.

"We have a lot more jobs in Cole County than we have people living here," Allen said as he explained that both patients and workers travel to Jefferson City for the health care industry. "Our three primary medical institutions are all regional drivers of our economy."

"Anything you can do to make it (the community) more attractive," he said. "If you can put a doctor in a nice building with nice equipment, that's just another plus of trying to bring them to the community."

He said incoming doctors must be able to see that the community is a place they want to live and if it's a great place to raise a family.

"The school system also has to be strong, so we've got a great thing going for us," Luebbering said. "When you figure government and health care, and then you throw in education, those three are key factors when you talk about Central Missouri."

Houston mirrored Luebbering's views on health care and education shaping the economic development of the community.

"It bodes well for the community at large that we've got strong providers who are investing and continuing to invest in the health care market within Mid-Missouri," Houston said. "I think as a state capital, having a strong medical group, strong hospitals, helps to continue to diversify and strengthen our economy.

"I think it's all positive for Jefferson City, Cole County and Mid-Missouri when you've got a solid basis in the community like good health care and good schools."

What are hospitals contributing?

A closer look at these institutions' finances reveals just how much money the hospitals are taking in, as well as what they are shelling out in employee wages.

According to John Fougere, Director of Communications for Missouri Department of Economic Development, the health care industry employs nearly 5,000 people in Cole County.

CRMC employs 1,090 full-time equivalents, paying out $68 million in salary and wages, along with another $14 million in benefits.

St. Mary's employs 782 full-time equivalents, paying out $50 million in annual salary and wages. $15 million is spent on benefits for employees.

All three health care providers rank in the top 10 employers for central Missouri. As of Oct. 2011, JCMG employed a total of 564 staff members.

Fougere said the health care employees' wages are 20 percent higher than the private sector as a whole.

"Hospitals like St. Mary's account for over 1 in 3 of those jobs, which have a huge impact in the local economy given all the spending that occurs," Fougere noted.

Jefferson City Chamber of Commerce President Randy Allen noted every industry has a different impact, but any time a company expands, it makes a difference.

"Health care is a very valuable industry to our city and county," Allen said.

All three projects will add new employees; the CRMC project expects to bring in 30-35 new physicians and a total of 100 new employees.

Although there are just 76,363 people living in Cole County, the health care facilities attract patients from surrounding areas, with CRMC serving approximately 219,00 throughout Mid-Missouri.

"It is all about getting more money into the system and recycling" it back through the community, Allen related. "Good health care is a driver of economies."