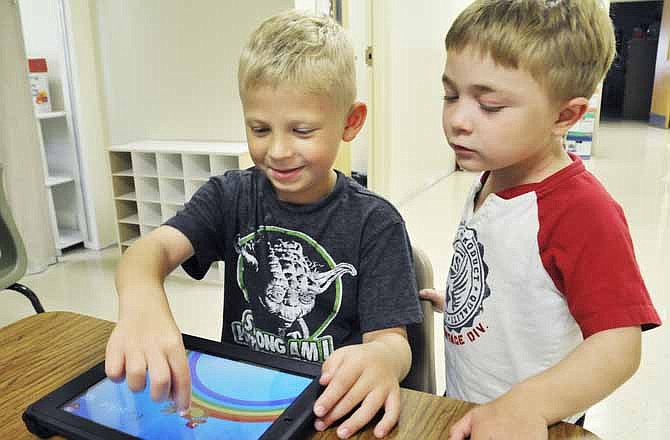 Kyle McCarty, right, looks on as Nolan Bennett traces letters and repeats words that start with those particular letters. Both will be in kindergarten at Blair Oaks this fall.

Humans have relied on books for learning ever since some enterprising Mesopotamian pressed a reed into a lump of wet clay.

But in April 2010 - a mere 39 months ago - Apple Inc. introduced the iPad tablet. Ever since, educators have been learning how to used the devices to enrich classroom learning. 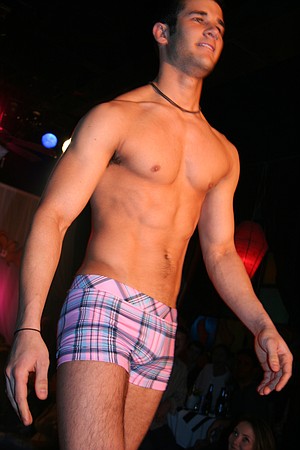 Will the iPad, and devices similar to it, someday replace the book in America's classrooms?

This summer, the Jefferson City Public Schools purchased almost 2,000 new iPads - five for every elementary classroom in the district and one per every certified faculty member. At $379 each, the purchase cost $750,000.

"We felt that if we are going to have iPads available to students, that our teachers need to be able to use them," said David Luther, assistant to the superintendent.

By the fall of 2014, the district hopes to be able to provide a device to every member of the freshman class. It's a goal, but money still must be found and appropriated. To outfit the current ninth-grade class of about 650 students will cost about $246,000. Eventually, school leaders want to offer a computer to every student.

Although a few iPads are in use at the high school, widespread use is beginning at the elementary level.

With thousands of lessons now stored online, electronic tablets are viewed by educators as a new method for encouraging students to interact and be creative with their learning. Not only can the devices hold hundreds of digital textbooks, they are lighter to carry than a printed book and help students better prepare for a world immersed in technology.

But Luther added the district is turning to the iPads to help the district perform better on statewide assessments.

To comply with those testing requirements, even very young children are being taught keyboarding skills.

The phase-in of tablets does not mean the phase-out of textbooks.

Gretchen Guitard, assistance superintendent for staff services, said: "As a district, we have not said, "We are not using textbooks.' However, clearly we have some teachers who are interested in exploring a more hybrid approach to instruction where the textbooks would be the supplement, rather than the driving resource."

Guitard said last year 10 secondary-level math teachers formed a research group to concentrate on using technology more than textbooks. Each class was given 15 laptops; or about one device for every two students.

"Before, it was textbooks supported by technology," she said.

Based on data collected at the end of the year, the teachers decided to continue their research, Guitard said.

"But they wanted the same opportunity with iPads, which worked out perfectly with the direction the district is going," she added.

This year, the 10 teachers are being given 15 iPads per class with the directive to research math applications, or "apps," that support the curricula.

Garrett Miller, director of technology, said the books-to-tablets phenomenon is a "natural evolution."

Miller thinks, instead of carrying around a 30-pound sack, a student's iPad someday will be their "backpack."

Another knock against textbooks is that courses rarely cover all the elements included in the books, which can be hundreds of pages long and heavy.

California has been working for more than a decade on an open-source textbook project to address problems with textbook shortages and high costs and provide digital content for free.

Will the district save money by purchasing more technology in lieu of fewer text books?

The jury is still out.

The iPads cost the district about $379 each, but a high school textbook's average cost is about $70.

Recognizing that a sea change is about to occur, Guitard said, textbook companies are working quickly to get in front of the problem.

"I'm bombarded daily with e-mails," Guitard said. "The textbook companies are working fast and furiously at developing electronic resources that the school districts would be interested in purchasing."

So far, those digital versions of traditional textbooks aren't any cheaper.

The average textbooks stays "in play" in the Jefferson City schools for about eight years. But, with digital textbooks, the companies make sure they get their money.

"With the digital version, we pay per seat, per student, per year," Guitard lamented. "After five years, you've paid for a new book."

"If you're talking about literature class, there's a lot available on the Internet at no cost that can be legally accessed. And I would speculate, it may not be as necessary to purchase textbooks ... more and more teachers will be going that direction," he said.

Miller said the educational buzzword he frequently hears is "engagement." And he thinks an iPad can help "engage" students in their lessons.

"You can either read about Martin Luther King's "I Have a Dream' speech in a book or you can watch it online," he said.

Some observers are worried the popular new devices will either be ruined by careless students or will be stolen.

"We understand they're not bulletproof," Miller said. "They are going to get wet, dropped, lost."

Miller said the district is working on a set of policies and procedures to mitigate those factors.

He thinks it will be possible to track the devices with GPS or lock them down remotely. The district is also purchasing durable cases to protect them and is looking at possible insurance scenarios.

"Nothing is fool proof," he conceded.

Another advantage - for teachers - is that students will no longer be able to make up excuses because their homework will be stored electronically.

The Blair Oaks School district already has embraced tablet technology in the classrooms.

With 375 children enrolled, Blair Oaks elementary provides one computer for about every three children. Many of those devices are Chromebooks and, now, iPads. Some of that technology was paid for via fundraising by the district's parent-teacher organization.

Kim Rodriquez, elementary school principal, said the state's accountability measures have changed how teachers use textbooks. Under the new Common Core standards, teachers typically cherry-pick lessons from various resources to create their own curriculum in line with the grade-level and course-level requirements set by the state of Missouri.

"They no longer pick up a textbook, start at page one, and have students work until the end," she said.

So, if fifth-graders are supposed to be able to "recognize and generate equivalent forms of commonly used fractions and decimals," a teacher will find resources - either online or in a textbook - to teach those concepts.

The Internet has proven invaluable for doing that, proving to be a font of innovative teaching ideas that educators share via sites such as Pinterest and Twitter.

"There are so many academic, interactive websites," Rodriquez said.

Online learning also allows students to work at their own pace. For example, with a program called "Typing Club," students must master one level before advancing to the next. Blair Oaks Elementary also is using a program called "eWrite Steps" to help kids become effective writers.

The school recently participated in a pilot of the Smarter Balanced Assessments that have been aligned to the Common Core State Standards. The Common Core standards are more rigorous that previous Missouri standards; for example, students are now expected to have the multiplication tables mastered by the third grade and lessons on fractions have been moved down a few grades, too.

It was eye-opening, said Rodriquez.

The new exams require students to complete them online, which is a challenge for schools - which many not have enough computers to administer the tests easily - and for younger students - who many not yet have attained the keyboarding skills needed to complete the exams. Rodriquez noted her school overcame the first hurdle by testing students at two different times. But she said the latter hurdles - typing and more reading - was more of a challenge.

"The state assessment was overwhelming for them," Rodriquez said.

She added her department colleagues understand that a lack of adequate technology is a challenge for many districts. To address the problem, the Smarter Balanced consortium has surveyed Missouri's school buildings to determine what resources exist already.

"They've gathered a lot of that data for us. We're going back this summer and filling in the gaps in that survey and actually assessing what it will take, not only to bring the districts up to speed, but also to prepare students for 21st Century learning. It's a huge job but we're working on it diligently this summer," she said. "We feel that every student should have equal access to the Internet and that teachers should have equal access to those online instructional materials."

Potter argued that computer skills are a "basic necessity" for life in the modern world and critical for obtaining almost any job upon graduation.

"When it comes to computer skills, you should not get from kindergarten through the 12th grade and not have computer skills ... that's just not acceptable," she said.

But even as technology is becoming a larger part of students' lives, books remain critical, Rodriquez said.

"We're definitely not throwing out the books, that's for sure," she said, noting the school is continue to build their "level libraries," which provide reading materials as students' skills improve.

And she noted that teachers prefer the Chromebooks because it's easier to control and restrict what children are seeing online. But teachers still must monitor that aspect, she said.

Blair Oaks has not found theft to be a problem. One student took a Chromebook home, but it was returned by parents.

Not everyone is thrilled with the idea that kids will have even more exposure to computers. They fear the devices will be misused when students use them for playing video games more than studying.

Wendy and Gus Gustofson - who live part time in Ashland and part time in Duluth - enrolled their son in the Southern Boone County school district while he was in primary school. The couple have since transferred him to a charter school in Duluth that emphasizes environmental learning and allows students to spend more time outdoors than a conventional public school. Although the school doesn't provide iPads to students, it does allow kids to bring them to school.

They are concerned about their son's constant exposure to computers.

"I'm convinced every day that technology is dumbing kids down, dramatically," Wendy Gustofson said. "Kids don't know how to "do' anymore. It's disturbing."

She believes quick access to technology means it's too easy to look up information and so the human brain holds on to fewer facts. And she feels that the encyclopedias she used as a young person were fact-checked by knowledgeable people in the field, unlike Wikipedia today.

And most importantly, Gustofson is worried kids today don't spend enough time learning how to do useful tasks - like carpentry, mechanics or sewing.

She wants her son to exercise more and she is not certain that staring at a screen all day is good for one's eyes. She tries to monitor the amount of time he spends on computers, but it concerns her how addicted he's become to technology.

"If there is a laptop or iPad or cellphone in reach, he's got to have it," she said.

But she's pleased her son loves to read and said he has good taste in books.

"We want our kid to get more life experience. We want to force him to find out and learn things himself by talking to people," she said.