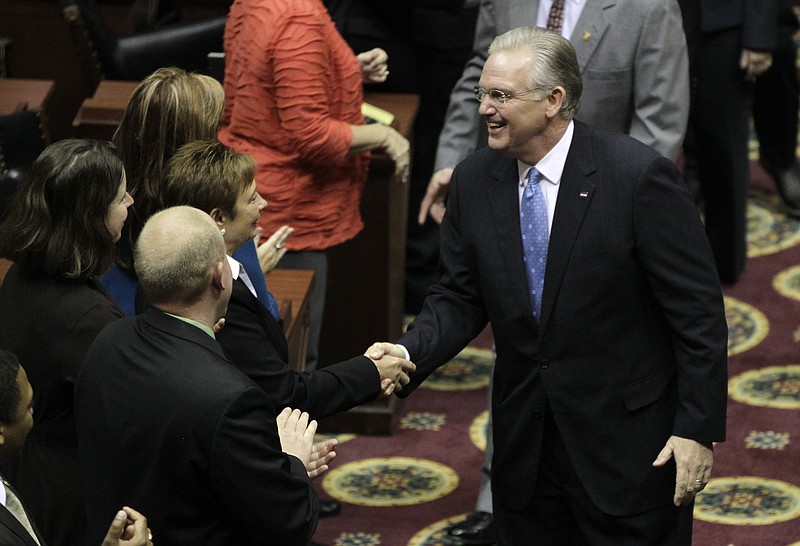 In this Jan. 28 file photo, Missouri Gov. Jay Nixon shakes hands with lawmakers before delivering the annual State of the State address in Jefferson City. When it comes to money in politics, the sky is the limit in Missouri where ethics laws are the weakest in the nation, according to Nixon. Nixon vowed during his address to push a ballot initiative to reinstate campaign contribution limits if lawmakers won't do it themselves this year.

When it comes to money in politics, the sky is the limit in Missouri.

Candidates and political committees can take as much cash as they want from contributors. Lobbyists can spend endless amounts on gifts, meals and trips for public officials. And legislators leaving office can cash in immediately, converting from lawmaking to lobbying with no waiting period at all. The only requirement is to report it publicly.

"There's essentially no rules as to what conduct is right and wrong," bemoans Rep. Kevin McManus, who has filed legislation to change that.

Yet Gov. Jay Nixon has issued an ultimatum. He's vowing to push a ballot initiative to reinstate campaign contribution limits if lawmakers won't do it themselves this year. The governor asserts that Missouri's "weakest-in-the-nation" ethics laws are destroying the public's trust in elected officials.

Nixon's call for reform might seem likely to resonate, given that the 2012 presidential campaign, not to mention Missouri's past two governor's races, were the most expensive in history. But it may not, with the Legislature controlled by skeptical Republicans. And in some other states inundated with campaign spending, such as Florida, the response actually may be to move closer to Missouri's wild-West model rather than to crack down.

The divergent approaches show consensus remains more elusive than ever about the best way to police money in politics. Is it better to impose limits, as the federal government and most states have done since a 1976 Supreme Court decision upheld contribution caps? Or are voters better served by just illuminating what's going on?

Lawmakers in at least 20 states already have filed campaign finance bills this year, almost equally split between these approaches.

The federal government has tried - but often failed - to have it both ways. Despite repeated tweaks to the requirements, political strategists have devised ways to route millions of dollars into campaigns and causes without disclosing the original source. This past week, the U.S. Supreme Court agreed to review a federal law limiting donations to candidates and committees.

"The inclination is if money influences, then let's reduce money," said Denise Roth Barber, managing director of the National Institute on Money in State Politics nonprofit. But the result is usually just circumvention, "so really, has the money been reduced? Or has the disclosure of the money been reduced?"

Missouri voters first approved campaign contribution limits two decades ago. But the Legislature repealed them in 2008, and for the past five years, Missouri has been the only state with the trio of no contribution limits, no lobbyist gift limits and no revolving-door policy on lobbying.

Yet Missouri has comprehensive disclosure laws. Political contributions of more than $5,000 show up within 48 hours on the Missouri Ethics Commission website. Every dollar spent wining and dining officials is posted online monthly. And when lawmakers become lobbyists, their registration - and client list - is available on the Internet within days.

"You have the best system you can expect when you have full disclosure and quick efficiency of that," said Travis Brown, a well-connected lobbyist.

Brown represents Rex Sinquefield, Missouri's undisputed campaign money whale. Since the retired investment company mogul started spending his fortune in politics in 2006, Sinquefield has contributed about $25 million to candidates and political committees that support lower income taxes and school-choice measures, among other things. When Missouri operated under campaign contribution limits in 2007, Sinquefield channeled his money through 100 shell committees in an in-your-face example of how to beat the system.

"Money finds its way into politics," said Missouri House Majority Leader John Diehl. But "I think the donations in the state are pretty transparent on where they come from."

Some Florida lawmakers are now espousing a similar philosophy. A House committee there endorsed raising the state's campaign contribution limits from $500 to $10,000 while mandating more frequent - sometimes even daily - contribution reports. The system would be "one of the most transparent in the nation," said the sponsor, Republican Rep. Robert Schenck.

Minnesota lawmakers this year are expected to raise campaign contribution limits for the first time in 20 years. A Montana proposal to abolish donation limits for political action committees and raise them for individuals is stirring impassioned debate.

In Missouri, Nixon, who himself has been one of the biggest beneficiaries of Missouri's unlimited donations, is not the only one calling for an end to the big bucks. Among the converts is former Republican Sen. Jim Lembke, a onetime opponent of donation limits who lost re-election last fall and now is a lobbyist.