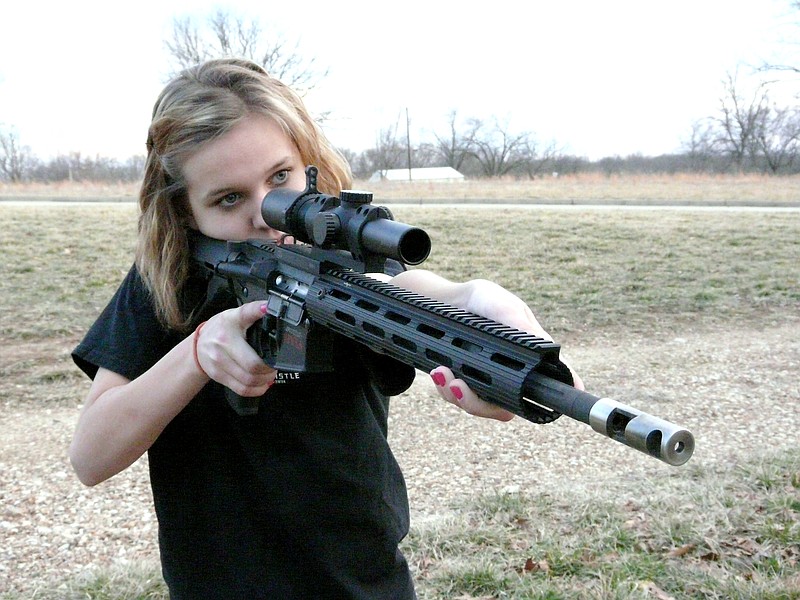 Katie Francis, 13, Saint Thomas is a typical young teenage girl. With her pink nail polish and girlish tendancies, Katie focuses in on her target while shooting her rifle in the back yard.

Katelyn "Katie" Francis is your typical 13-year-old girl: a good student, big sister, and athlete. There is, however, more to this Blair Oaks eighth-grader than meets the eye.

After school each night the young teen practices shooting her pistol, rifle and shotgun. On weekends she travels across the country to try her hand at shooting competitions. With her eye on the target, she's the one behind the trigger, pulling out all of the stops along the way.

An outdoors girl, Katie enjoys to hunt, bagging her first deer at age 9. Starting her third year of competitions, she practices loading her guns quickly or shooting targets each night. As competitions near, her practice becomes more focused, getting more acquainted with the specific guns she'll use.

"I like trying new guns and traveling out of state," Katie said. "I've progressed in every single one of my competitions."

Of the three guns she shoots, the shotgun is her favorite. Small in stature, the young teen enjoys competing and says she'll continue shooting throughout high school and possibly during college.

Katie has made many friends from across the country while participating in this sport. She said she enjoys meeting new people and taking on the challenges.

Katie started out competing in pistol competitions and recently worked her way into the three-gun course. She switches from rifle, to pistol, to shotgun as she goes through a new course each time. Climbing over walls that reach as high as her head and moving through obstacles and across bridges while trying to hit the targets takes focus, skill, and a fair amount of adrenaline. Katie competes against shooters of all ages, from all backgrounds, and even some professionals.

Her hard work and dedication has paid off, impressing businesses enough to invest in her talent. Katie began to pick up several sponsorships helping to pay for new guns, clothing, ammo, tournament fees, safety equipment and more. She is sponsored by CPWSA, 5.11 Tactical, Cathy Ergovich at What Ya Say Hearing, AP Customs, Rock Castle Shooting, and Nordic Components. Realizing her education comes first, some of her sponsors have put grade point average requirements on Katie, further enforcing the rules of her own house.

Chad and Julie Francis of St. Thomas are thrilled with their daughter's passion and talent. They encourage Katie to continue shooting for as long as she desires. They began instilling the rules for gun safety into their three daughters at very young ages. Katie continuing to shoot was her own choice. Katie started shooting at the age of 5.

"It is like any other sport, it teaches confidence and responsibility," Chad said.

Teaching the girls how to be safety conscious around firearms is something he feels strongly about. A marksmen instructor for the Missouri National Guard, Chad teaches soldiers how to shoot. As a hunter, he too learned how to use guns at an early age, and wants to continue the tradition with his own children.

"I make them (his kids) recite the rules, even if they don't want to shoot. I think everyone should know the safety aspects," he said.

Chad also competes in shooting tournaments, and the pair have even competed against each other.

With recent events, it is no question the Francis family has gotten some criticism for teaching their daughters how to shoot. The dedicated father said some people don't realize that shooting is a sport.

"Guns are not evil, they are inanimate objects," he pointed out.

A video of Katie at a three-gun competition in Jacksboro, Texas has been shared from her Facebook page more than 48,000 times, with more than 6,500 comments and 19,500 "likes." The video was just posted in late October.

Most comments on Katie's page are encouraging, giving her a "you go girl" for taking on the challenge.

"It's funny to see people talking about her; to us, she's just our little girl," Chad said.

Katie's next big competition is scheduled for April in Kentucky. Until then she'll continue doing what she loves: putting in those ear plugs and getting outdoors with a gun in her hand.