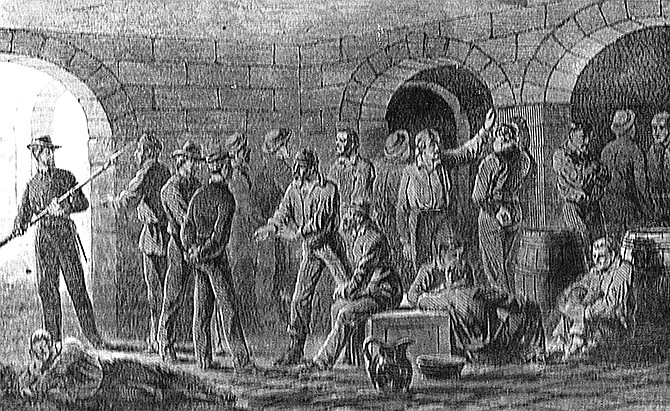 Before Vogel Insurance owned and occupied the Democrat Building at 300 E. High St., its offices were at 301 W. High St., where the Harry S Truman State Office Building is today. In the basement of that razed historic building were shackles thought to have housed Civil War prisoners similar to those illustrated here in the Harper's Weekly sketch from Oct. 5, 1861.

The second-floor cupola of the "Democrat building" at 300 E. High St. in downtown Jefferson City is a notable architectural feature today.

At the end of the 19th century, it was an essential design to allow a dentist optimal sunlight before electricity. 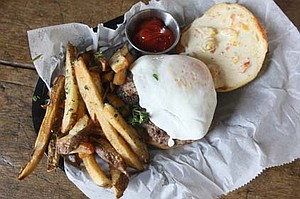 Photo by Rick McFarland
The Bacon, Egg and Cheese Burger is served with home-cut fresh herb fries at The House, 722 N. Palm St. in Hillcrest.

The dental office was not the first venture in this city Landmark, built by Joseph Richard Edwards as the office for the weekly Cole County Democrat newspaper.

Born in 1847, Edwards also was a member of the bar, a stockholder and director for the Merchant's Bank and served Cole County as prosecuting attorney.

For the past 30 years, Fred Vogel Insurance has owned and operated out of the 140-year-old building.

"It's been around a long time," said owner Charles Prather.

Prather bought the building and business from his father-in-law, the late Fred Vogel, in 1999.

Vogel bought the former Jack and Jill clothing store site in 1974, after his long-time location at the corner of Broadway and West High streets was condemned to make way for the Harry S Truman State Office Building.

At Vogel insurance's 301 W. High St. office, Prather recalls looking out his office window to a view of the Capitol. And his children remember the curious shackles in the basement, likely used to hold Civil War prisoners, he said.

When forced to move from the lucrative location, convenient for state workers to stop in during their breaks, staying downtown was a priority, Prather said. Vogel's first office was in the 200 block of Monroe Street.

The corner landmark, acknowledged by the city in 2000, is included in the Missouri State Capitol Historic District, listed on the National Register of Historic Places in 1975.

The Victorian-Gothic style building survived despite adjacent buildings to the south and the east both being lost to fire.

Between the original newspaper business and the insurance company today, the site also served as a grocery store, dental office, children's clothing retail and attorneys' offices.

In addition to the insurance offices today, the second floor is a computer repair office and the upstairs continues to house attorneys' offices.

The building's old-time ice box is a cool space for file storage today.

Originally, blocks of ice floated down the Missouri River would be hauled by horse-drawn wagon up to the business' loading door. Packed well, the blocks would last throughout the summer season, Prather said.

Vogel became an insurance agent in 1929 and started his own insurance business in 1947, when the industry was beginning to expand, Prather said.

When Vogel retired and turned the business over to his sons-in-law in 1978, his agreement included keeping a desk for him, though he used it seldom. In the same way, when Prather turned over the business to his son Rick in 2002, he kept a desk there, too.

"Fred was thrilled his grandson was taking over," Prather said.

The downtown office, one of four offices the company owns, is convenient for Rick Prather, who currently serves on the City Council.

Community service was passed down through his family, Rick Prather said.

Vogel was involved with the library and the city charter as well as other community initiatives in his day, including a run for state representative.

"It's neat to carry on the tradition and be my own boss."