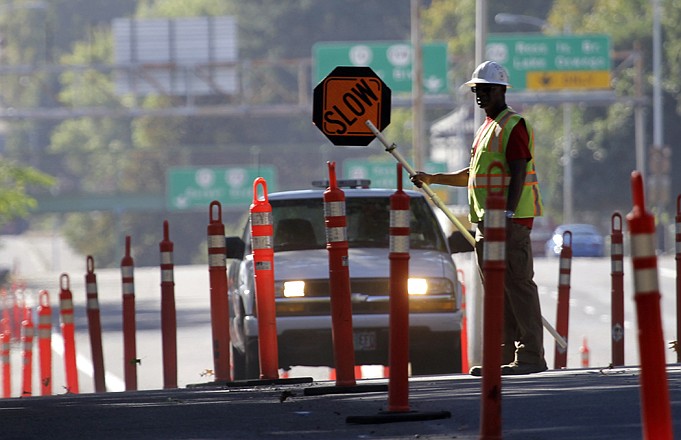 A worker directs traffic for street construction in Portland, Ore., Friday. The Labor Department reported Friday the unemployment rate fell to 7.8 percent in September, a decline of 0.3 percentage point and the lowest since January 2009. The government said the economy created 114,000 jobs, about as expected, and generated 86,000 more jobs in July and August than first estimated.

WASHINGTON (AP) - The U.S. unemployment rate dropped below 8 percent for the first time since the month President Barack Obama took office, a surprising lift for both the economy and his re-election hopes in the final weeks of the campaign.

The rate, the most-watched measure of the country's economic health, tumbled to 7.8 percent in September from 8.1 percent in August. It fell because a government survey of households found that 873,000 more people had jobs, the biggest jump since January 2003.

The government's other monthly survey, of employers, showed they added a modest 114,000 jobs in September, but it also showed job growth in July and August was stronger than first thought.

Obama, eager to shift attention from a disappointing performance at the first presidential debate, said Friday that the report showed the country "has come too far to turn back now."

Romney countered: "This is not what a real recovery looks like."

The drop brought the jobless rate back to where it was when Obama was sworn in, in January 2009, and snapped a 43-month streak in which unemployment was 8 percent or higher - a run Romney had been emphasizing.

The October jobs report comes out Nov. 2, four days before the election, so Friday's report provided one of the final snapshots of the economy as undecided voters make up their minds.

The government calculates the unemployment rate by calling 60,000 households and asking whether the adults have jobs, and whether those who don't are looking for work.

A separate monthly survey seeks information from 140,000 companies and government agencies that together employ about one in three nonfarm workers in the United States.

That survey found that the economy added 114,000 jobs in September, the fewest since June. Most of the job growth came in service businesses such as health care and restaurants.

Taken together, the two surveys suggest the job situation in the United States is better than was thought.

Economist Joel Naroff, president of Naroff Economic Advisors, called the strong employment reports "a shocker" that showed the job market was sturdier than most economists had thought.

Financial markets seemed less impressed. The Dow Jones industrial average climbed as much as 86 points in early trading but drifted lower for most of the rest of the day. It finished up 34 points at 13,610. The Standard & Poor's 500 index, a broader measure, was down a fraction of a point.

Stock indexes have been trading at or near their highest levels since December 2007, the month the Great Recession began. They have gotten a lift from Federal Reserve efforts to stimulate the economy, and by a European Central Bank plan to buy the bonds of financially troubled countries to ease a debt crisis there.

The yield on the benchmark 10-year U.S. Treasury note climbed by 0.06 percentage point to 1.73 percent, a sign that investors were more willing to embrace risk and leave the relative safety of the bond market.

The unemployment figures were so surprisingly strong that some pundits and at least one member of Congress, Florida Republican Allen West, accused the Obama administration of manipulating the statistics to help the president's prospects.

On Wednesday, Obama was widely seen as having lost his first debate with Romney.

Jack Welch, the retired former CEO of General Electric, said on Twitter: "Unbelievable jobs numbers ... these Chicago guys will do anything ... can't debate so change numbers."

But the unemployment data is calculated by a government agency, the Bureau of Labor Statistics, under tight security and with no oversight or input from the White House.

Keith Hall, a former commissioner of the BLS who was appointed by President George W. Bush, said the numbers could not have been manipulated.

"It's impossible to do it and get away with it," he said. "These numbers are very trustworthy."

Economists offered reasons not to read too much into them, though. Most of the increase in employed Americans came from those who had to settle for part-time work: 582,000 more people reported that they were working part-time last month but wanted full-time jobs.

That is the biggest increase in so-called underemployed Americans since February 2009, during the depths of the Great Recession.

Economic troubles in Europe and Asia also may be taking a toll on American factories. Manufacturing employment dropped by 16,000 in September after falling by 22,000 in August.

Factory hiring had been a source of economic strength the past two years: Factory jobs rose last year at the fastest pace since 1997.

But Europe's ongoing economic crisis, along with a slowdown in China, means demand for U.S.-made goods is drying up and "the days of robust manufacturing payrolls growth are likely behind us," said Chris Jones, an economist at TD Economics.

The unemployment rate has fallen from a peak of 10 percent in October 2009. But a big part of the drop over the past three years came because so many Americans stopped looking for work, so they weren't counted as unemployed.

Some were retiring baby boomers. Others were so discouraged by the weak job market that they stopped putting out resumes.

Economists were pleased with September's drop in unemployment because it happened for the right reasons: More Americans got jobs. And the work force grew by 418,000, the most since February, suggesting people are more optimistic about finding jobs. Because 873,000 more people did find work, the number of unemployed fell by 456,000. And that decline pushed the unemployment rate down.

Arthur Nazh was not surprised to hear that the unemployment rate fell. Business has improved this year at the kiosk where he sells souvenirs at a mall in Arlington, Va.

The economy "is getting better," said Nazh, 27, who employs six people and said he plans to vote for Obama because the economy needs more time to heal. "People are starting to buy more, spend more money."

Obama and Romney campaigned Friday in Nazh's home state and others that could tip to either candidate and determine the outcome of the election. Romney released three ads, mostly focused on jobs.

"These are tough times in this community," Romney, the former Massachusetts governor, told a rally outside a construction equipment store in Abingdon, Va. "We're going to bring back jobs and bring back America."

At a campaign stop in Cleveland, Obama declared: "We are moving forward again."

"Today's news should give us some encouragement," the president told thousands at Cleveland State University. "It shouldn't be an excuse for the other side to try to talk down the economy just to try to score a few political points."

The political back-and-forth over the unemployment numbers underscored the centrality of jobs to the election after a year in which the economy has been difficult to read.

The job market got off to a strong start in 2012. Employers added an average 226,000 jobs the first three months of the year.

Hiring in January, February and March was probably even stronger than that: The Labor Department has said 386,000 more jobs were created in the year that ended in March, but it has not assigned the jobs to specific months yet.

Job growth slowed sharply to an average 67,000 a month from April through June. And the weakness appeared to have continued into the summer, raising fears that a slow and steady economic recovery was losing momentum.

But the revisions to the July and August figures on Friday eased those fears somehwat. Monthly job growth was back up to an average 146,000 from July through September.

Naroff, the economist, predicted that unemployment would inch back up, and that job growth would settle at about 150,000 per month for the next several months. Economists at PNC Financial Services Group predict job growth will accelerate to 170,000 per month in 2013.

The economy is still far from full health. The number of U.S. jobs peaked in January 2008, a month after the Great Recession officially started, at 138 million. The job market shed 8.8 million jobs by February 2010. Since then, the economy has regained 4.6 million, or a little more than half, of those lost jobs.

No incumbent president since Gerald Ford in 1976 has faced re-election when the unemployment rate was as high as September's 7.8 percent, even after the sharp drop from August. Ford lost to Jimmy Carter.