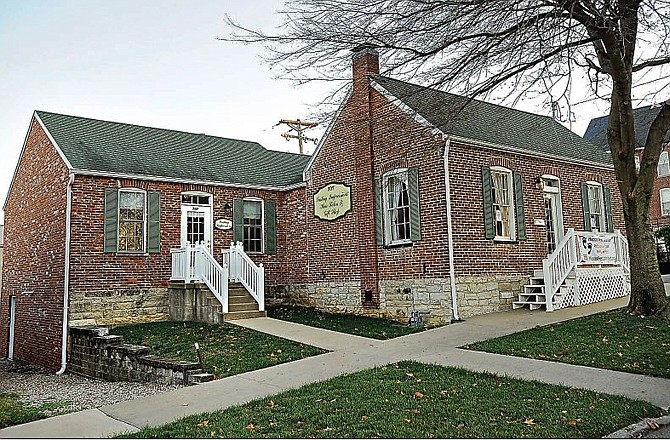 The Buehrle Home at 707 Washington St. is a recipient of the Jefferson City Landmark designation.

A Jefferson City Landmark and a fine example of the German architectural style, the Buehrle House at 707 Washington St. has held love and beauty.

When Wendelin Buehrle built the brick home in 1864, it probably followed the custom of providing for his new wife, Margaretha.

The city's Historic Preservation Commission said the house "is historically significant because of the integrity and purity of its design."

It continues to stand along with many other buildings contributed to the city by Wendelin Buehrle and his son Fred Buehrle.

The great-grandson of Wendelin Buehrle, Bill Stine recently shared a program for the Missouri River Regional Library about German immigration to Mid-Missouri as a result of their homeland's revolution in 1848.

Wendelin Buehrle and his brother Fredrick left Baden, Germany, in 1852, and after a time, arrived in Jefferson City to stay in 1857. They became naturalized citizens in 1859.

Fredrick Buehrle served with the Union in the Civil War and was wounded in August 1861 at the Battle of Wilson's Creek. He was a bachelor who worked at Lohman's Landing. Wendelin Buehrle served in the Home Guard to protect the city. After the war, the brothers joined the Grand Army of the Republic, formed by Union veterans to participate in public events. The brothers may be best known for firing the canons on the Capitol grounds for many years. Fredrick became doorkeeper to the House and Senate chambers. When he died in 1915, Fredrick's funeral was the city's second largest, after Gov. John Marmaduke's. Wendelin Buehrle and his son Fred Buehrle built many brick buildings still standing today, including the Hess House, the Lohman Opera House, the Merchant's Bank Building and Grace Episcopal Church on High Street.

Eventually, Wendelin Buehrle moved in with his son and Stine's grandfather at a large farm in the Frog Hollow Road area.

Stine's mother, Louise Buehrle Stine, grew up with her grandfather in the home and remembered polishing his medals with brick dust, he said.

As a child, Stine walked by the quaint, brick house daily from school to home. "I never had a clue it was a relative's house," Stine said.

After watching the Ken Burns Civil War series in 1993, Stine asked about his ancestors. Then in 1996, he attended a cemetery tour hosted by local historian Mark Schreiber, where he saw his great, grand-uncle on the cover.

Both Wendelin Buehrle and his wife's family, the Bodtenschatz, were founding members of the Central German Evangelical Church, organized in January 1858, said local historian Walter Schroeder.

The church's parochial school, now gone, was just across the alley from 707 Washington St.