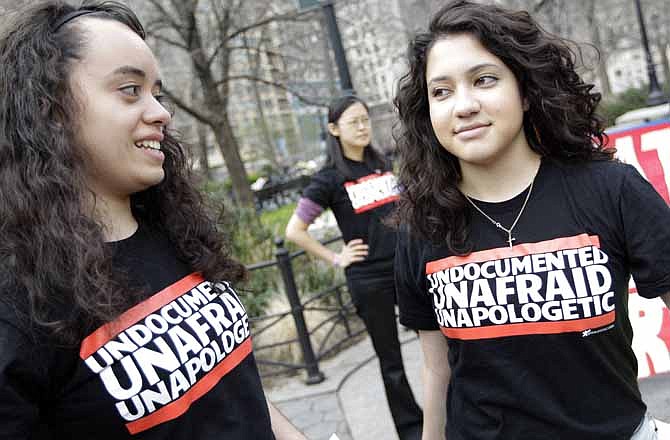 In this Friday, March 16, 2012 photo, Angy Rivera, left, and Melissa Garcia Velez participate in an immigrant rights rally in New York. The two are members of the New York State Youth Leadership Council, a nonprofit, youth-led organization that fights for immigrant rights.

NEW YORK (AP) - Angy Rivera glided through the airport as though she owned it, giddy with excitement at her brave new world.

Then she saw the security guards, and froze.

After a lifetime of avoiding any public place where she might be asked for identification, had she just made the biggest mistake of her life? Would she be stopped, arrested, detained - and deported? Nervously, she handed over her boarding pass.

The security guard barely glanced at her Colombian passport, questioned her about a tube of hair mousse - and waved her through. Elated, she boarded the plane.

"I am flying for the first time," the 22-year-old criminal justice student from Queens wrote, in a jubilant essay.

"I left something up in between the air and clouds," she wrote. "Not my luggage. Fear."

That pulsing fear that had part of her life for 19 years, since her mother brought her here from Colombia - gone, swept away by President Barack Obama's announcement in August that some young illegal immigrants would be allowed temporary status and work permits.

Now she could visit the Department of Motor Vehicles, just to witness the crazy lines her friends complained about. Now she could savor the simple pleasure of walking home at night without the nagging fear that any little incident might trigger her deportation.

This is the way it is for hundreds of thousands of young men and women who suddenly can be sheltered from deportation under Obama's policy. So far, about 180,000 have applied for the program, and nearly 4,600 have been approved, according to U.S. Citizenship and Immigration Services; with a flick of a bureaucratic switch, young immigrants are coming out of the shadows.

But Angy Rivera is special. "Angy is our rock star," jokes a friend, Melissa Garcia Velez.

In the past two years, Rivera has become one of the most visible leaders in a nationwide movement of young people brought here illegally as children and fighting for the right to stay.

Along with Velez, she is a member of the New York State Youth Leadership Council, a nonprofit, youth-led organization that fights for immigrant rights. Her funny, pointed videos about the perils of navigating a life that is "undocumented and unafraid" are posted on the Internet. Her "Ask Angy" advice column has counseled hundreds of young illegal immigrants on everything from dating to suicide; the BBC has done a short piece on the column, as has NPR.

But suddenly the star, the one who can always research the answers and write about them in pithy prose, is stumped. And scared.

After sitting down with a lawyer, she learned that not only is she eligible for deferred action - a murky status that allows recipients a reprieve but is not a path to citizenship - she might be eligible for much more. A deeply buried horror from her childhood, which surfaced during a rigorous examination by her lawyer, means she might qualify for a special visa granted only to victims of serious crime. And that could lead to a green card and citizenship.

The knowledge has turned Rivera's head upside down.

If she is no longer "undocumented and unafraid," as her T-shirt proclaims, then what will she become?

If she is no longer illegal, she wonders, can she continue to offer advice to those who are?

"I won't want to leave the room," Rivera says, forlornly.

Growing up, Rivera's mother warned her never to go to an airport, or the department of motor vehicles, or even a hospital - any place where she might be asked for identification.

She couldn't go on trips abroad with friends, or fly, or drive. When she got older, she made excuses about why she couldn't go for drinks with colleagues after work.

Her mother, Maria, used fake passports to travel from Colombia when Rivera was 3. They settled in Queens and Rivera quickly adapted, acting as translator for her mother, excelling in school. Though she knew she "didn't have papers" as Maria put it, she didn't fully understand the implications until she was a teenager. As friends began applying for jobs and drivers licenses and college, Rivera felt stuck, left behind while others pursued opportunities denied to her.

She couldn't work without a Social Security number. And, as a non-citizen, she wasn't eligible for financial aid, despite top grades.

The oldest of four - her siblings are all American-born citizens - Rivera has nothing but gratitude and admiration for the mother who had warned her to be careful.

"Don't talk about this, don't trust anyone," she writes in a poem called "Rusty Chains."

But two years ago, Rivera spilled her heart to the world at a "Coming out of the Shadows" rally in New York. At first she was terrified. She could barely bring herself to wear the T-shirt, let alone say the words "My name is Angy. I am undocumented and unafraid" in public.

But once she did, there was no stopping her.

At marches in Washington and rallies in New York, sometimes outside Immigration and Customs Enforcement offices, Rivera was out front, brandishing a megaphone, urging others to "come out" too. She started writing her advice column, making short videos at home, writing blogs and essays and poems, embracing her newfound sense of identity and community.

"You could see this transformation," says friend and fellow NYSLYC member Norma Juarez. "She became a different Angy, more confident, more sure."

The transformation horrified Maria, who begged her daughter to leave the organization, to stay home, to be safe.

"You are going to get us both deported," her mother said, weeping.

But Rivera was firm. This was a fight she had to pursue, she told her mother.

When Rivera first got involved, the movement - a loose coalition of youth groups around the country - was focused mainly on the DREAM Act, which would allow a path to citizenship for some illegal youth who graduated from high school and spent two years in college or in the military. The act has failed several times.

Lately, many young immigrants have escalated their tactics, practicing civil disobedience, getting arrested, testing the Obama administration's professed new policy of "prosecutorial discretion," designed to focus on the deportation of known criminals, not students or people with no criminal record.

Rivera has refused to put herself in a position to be arrested. Her mother was already worried sick by all the hate mail her daughter receives on the Internet.

But gradually Maria has grown to understand her daughter's passion - and to support her cause. Now she follows "Ask Angy" on Facebook and boasts about her accomplishments to friends.

And she shares her own story: of leaving Colombia in search of a better life. Of working at any job she could find - dog grooming, waitressing, construction. Of struggling to understand her new world.

She knows that critics blame her for the trials of her child, and sometimes she feels guilty, too. She cries recalling her daughter's heartbreak on orientation day at John Jay College of Criminal Justice at the City University of New York, when Rivera was told she was not eligible for financial aid.

"I was afraid she wouldn't come home that day," she said.

Only a year ago, Rivera says, her mother would never have shared such memories, would have been too scared to talk about her illegal status.

When President Obama stood in the Rose Garden this summer and delivered the speech that would change Rivera's life, she was in a Chinese restaurant in Queens with friends.

Having memorized nearly all Obama's previous speeches on immigration, she deliberately avoided listening to this one. More of the same, she thought. More nice words about young people like her and how "courageous" they are, more empty promises about trying to help them.

So when she got home to a barrage of email and Facebook messages about the President's executive order, her initial reaction was skepticism. Was this just a ruse to round up young illegal immigrants and deport them and their families?

"I can't apply for this," she told Maria. "I won't do anything that might jeopardize you."

But the mother who was once so fearful would have none of it, threatening to file the application herself if her daughter refused. And so Rivera began gathering documents that could prove she had been living continually in the country since the age of 16, and that she was here on June 15, the day of Obama's speech.

School reports, college applications, her community service work as president of the Latino club in high school, the awards and grants she has won for her writing, her internships at a publishing company and nonprofit organization, bank statements, even a small newspaper article on the cloth bracelets she sells to help pay her tuition.

And the police file from long ago.

"Is there anything in your past I should know?" immigration lawyer Lauren Burke asked, when they sat down for the first time in September.

Haltingly, Rivera told her of the month she spent in foster care when she was 9. She had been sexually assaulted by her former stepfather, she said. Her mother had brought her to the police and filed a report. She had received counseling. It was not something she had shared with many people.

But it was all documented - and that, said Burke, was key.

Not once in all these years had Rivera ever imagined a shred of good coming from that dark time. Yet suddenly her lawyer was saying she might qualify for a U visa, the kind given to victims of sexual abuse. She could apply for deferred action, too. But the visa would grant her far more - the path to citizenship she yearned for.

"Angy, you deserve this," Burke said.

But Rivera was speechless.

What would her life have been like had she applied a decade ago? Would she be finishing college by now, rather than scraping together grants, selling bracelets and struggling to pay for semesters when she can. Would she have learned to drive, maybe even have traveled to Colombia to visit her grandmother's grave?

It took a week before Rivera could bring herself to tell friends at the NYSYLC, and when she did, she blurted it out nervously, as though fearful of their reaction.

"Where is my place now that I'm not deportable?" she asked them.

Now that the goal she has fought for so long is within her grasp, must she reject the person she has become - the "unidentified identity" she writes about so powerfully in her poems?

"Don't worry," said Garcia Velez, giving her friend a hug and joking, "You'll always be undocumented in my heart."

But Rivera was near tears.

Twenty-year-old Galaviz Luna understands. Brought from Mexico at the age of 4, he became deeply involved in the NYSYLC at 16, and through "random luck" received a green card at 18 after being sponsored by a relative. The transition, he tells Rivera, was "surreal."

Suddenly he was able to work, get financial aid for college, travel, pursue all the dreams that had been denied him so long. Next year he hopes to go to Cuba. He tells her it is a gift that she must embrace.

And then he said the words she dreaded.

"You cannot hold on to your undocumented identity," he said. "Because that is not who you will be."

Rivera buried her head in her hands.

She needs time, she says, to process the news, to figure out her new identity whatever that might be. She has no desire to rush headlong into any kind of new status or new life.

Her mother has no such qualms.

"Nothing can stop Angy now," she says. "This is her time."