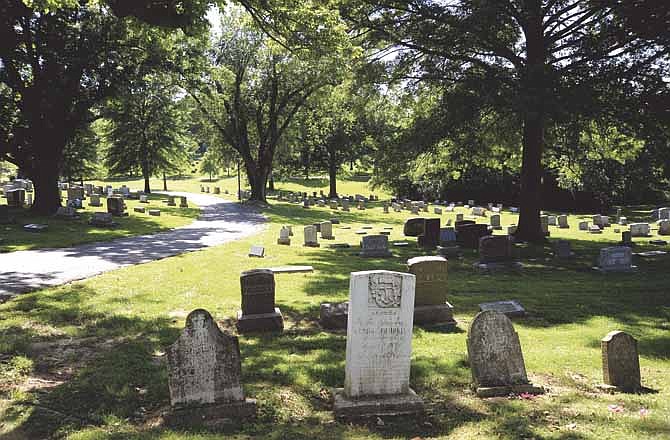 The winding paths of Riverview Cemetery showcase gravestones dating from the Civil War through the present.

Many public servants are memorialized at Riverview Cemetery in Jefferson City.

Some survived the Civil War, others immigrated here after that dividing point in Missouri history and others were pioneers long before the 1860s.

But the recently named city Landmark on 8,000 acres also holds dear loved ones, those whose influences aren't reflected in titles or grand overtures.

For most of the 10,000 who have been interred at the West Main Street cemetery in the last century, this is the last record of their lives, noted Mark Schreiber, local historian and cemetery board member.

Being named a city Landmark this year is positive reinforcement for the cemetery's efforts in preservation, said executive director Samantha Renner.

"The plaque says we're an excellent resource for genealogy and history," she continued.

One of Renner's favorite parts of working at Riverview is "unraveling the mystery" of an interred person's life.

When a visitor comes in search of more information, Renner looks forward to researching death certificates, newspaper articles and other sources to help find the history.

The original Hebrew cemetery was on Benton Street, off East McCarty Street. And the Evangelical section was disinterred as part of the U.S. 54 construction near Jefferson Street and Broadway.

Many of those interred there died in the 19th century. Hundreds of people were reinterred at Riverview from cemeteries that either had poor upkeep or were eliminated due to public progress.

From 1913-1915, many were relocated from the City and Woodland cemeteries. Schreiber speculated it may have had to do with the improvements to East McCarty Street.

Reinterring was more than removing and burying again. It also required moving the monuments, some of which were significantly heavy.

And at the time of the transition, Riverview was "in the boon docks," Schreiber said.

Unfortunately, the Riverview Cemetery Board kept records more about overall business strategy and financials than about the day-today happenings within the 80 acres, Renner said.

A few curious notes give insight into changing eras.

The hand-written minutes begin in 1906. But the first interment was not until 1910. Then the ledger stops in 1932 - during the Great Depression, Schreiber noted.

More than 10,000 have been interred at Riverview. And only half of the total site has been developed, Renner said.

About 2,700 veterans spanning from the Civil War to the present are buried there. It is one of the few places where Confederate and Union troops' plots are near each other, Renner said.

"I think that's very representative of what it must have been like to live here at that time," she said.

Many familiar Jefferson City names are carved on Riverview epitaphs - Binder, Dallmeyer, Goshorn, Hough, Lohman, McCarty, Moerschel, Ott, Price, Simonsen, Tweedie, Walz. Three state governors are buried there. In the few months Renner has been in her new position, she has been taken especially by the Hawkins Mausoleum, erected by a mother, Lucy Winfield Pope Hawkins, for her only son Scott, lost at sea at age 30. The white marble, neoclassical design is visible from Main Street and sits where Lotus Lake once was.

"It's a testament of love for a son; it's sweet and sad," Renner said.

Alfred Hawkins, the father of Scott Hawkins, was an executive with the Midland Printing Company, which did the official printing for the state 1905-1933.

Fredricka Simonsen, who donated funds for the 9th Grade Center named for her educator-husband Ernst, was the first female registered pharmacist in Missouri.

Capt. James Levi Keown operated a woodworking shop at the Missouri State Penitentiary and was involved with the interior construction of the governor's mansion. But he is the "hero" of a heartfelt, true story, when in the Civil War's Battle of Wilson's Creek, as a Confederate soldier, he braved heavy fire to pull his wounded, long-time friend and Unionist Frederick Buehrle from the battlefield.

"We encourage visitors to explore more on their own," Schreiber said. "We're just now starting to explore what we have here, too."