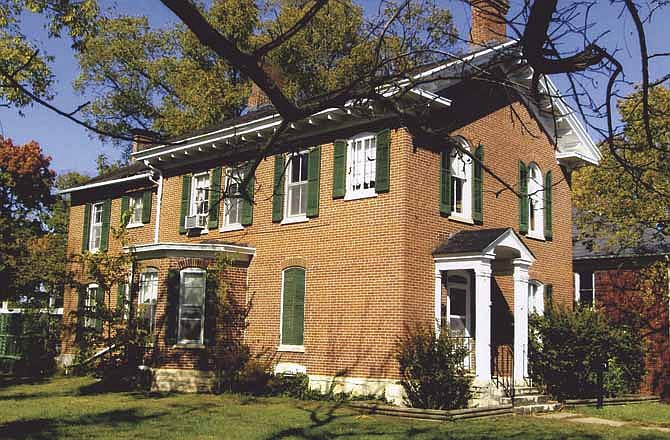 The Oscar Burch House was built in 1865 and has undergone numerous renovations.

The rough-edged limestone steps at the front door of the Oscar Burch House were carved from the oncefive acres owned by the namesake and his brother Nelson Burch.

But the entry facing Jefferson Street is not the original front door. Indeed it is the third front door the home has had since the first section was built in 1865 on a hilltop just beyond the city limits - then on Atchison Street.

"The site of the Burch house is important," said Walter Schroeder, president of the Old Munichburg Association. "The house sat high on a hill overlooking the city.

"The Burches were not part of the German immigrant Muenchberg group but like other "English,' (they) wanted to build on high points where they could "survey' the environs." 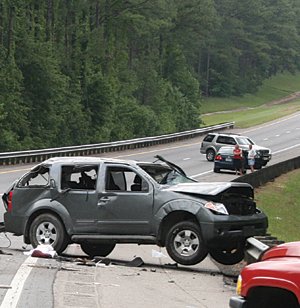 Photo by Leslie Roberts, Gadsden County Times General Manager)
Two Conway, Ark., residents were killed May 21 around 9 a.m. when their 2007 Nissan Pathfinder went into the median, rolled several times and came to a rest against this guardrail on Interstate 10 in Gadsden County, Fla.

High elevation was for the upper class, Schroeder explained.

Benefiting from the preference to Union supporters after the Civil War, Burch arrived in Jefferson City in 1865 with a job as assistant state librarian.

Burch and his wife, Mary, expanded their home in 1869, adding the dining room and kitchen and two bedrooms upstairs.

And they moved the front door to the north with a porch overlooking the growing downtown and Capitol.

In 1879, Burch expanded the Italianatestyle home again to the east, this time adding the living room, master bedroom and an arched stairway.

"An 1891 photo of the South Side taken from the Capitol dome shows very few houses beyond Central Church," Schroeder said. "It does show the two Burch houses rather prominently."

The final architectural change came shortly after Jefferson Street was built in 1919.

The lots to the north of the Burch house were sold, and new homes built there.

With the exceptional view gone, the east fireplace was moved to the northern doorway and the existing front door was added to face Jefferson Street.

In each expansion, the on-site, natural resources were put to use - the limestone carved for the foundation, pine trees for the flooring and walnut for the banisters and floor joists.

The distinctive green shutters may be 100 years old, as they were once functioning storm shutters with hinges, though at some time they were bolted open, said current owner Steve Rasmussen.

Even the backyard leaves signs of those who called the Burch house home generations before - hardy and well-aged trumpet vines and wisteria. In summer, they sprawl over pergola and lattice to create a

And walnut trees, perhaps older than the house, provide even more shade. "It's a delightful backyard," Rasmussen said.

However, moving inside, each expansion Burch made included 18-inch brick walls. So the house today, has thick, solid exterior walls, but interior as well.

"That creates real challenges for modern heating and cooling to work around," said Rasmussen, who has been updating the home since 2006.

Because the brick absorbs the heat of the day and the cool of the night, "it's like living in a cave," Rasmussen said. "There's stone all around you."

But with the aid of state and federal historic preservation tax credits, Rasmussen and his wife, Pam, have been able to improve the infrastructure, stabilize the foundation and add a new roof.

It's not the easily appreciated improvements, but they were necessary to preserve the 2002 City Landmark, also listed on the National Register of Historic Places by former owner Janet Smith.

"We always had an interest in restoring houses," Rasmussen said.

Now that the fundamentals are updated, Rasmussen said he is looking forward to the "fun" of aesthetic interior work and updating.

Unlike some older rehabilitation projects, which require an entire interior removal to essentially start over, the Burch home's federalstyle interior and woodwork are in healthy condition.

The Burch Home was a highlight of the Historic City of Jefferson annual Homes Tour featuring Civil War homes in September 2011.

The Rasmussens took hosting the visitors seriously, dressing in period costume, hiring an old-time photographer and serving lemonade in the backyard.

Rasmussen has been a Civil War buff for many years, he said.

"So it was fun this house ended up being a Civil War house," Rasmussen said.