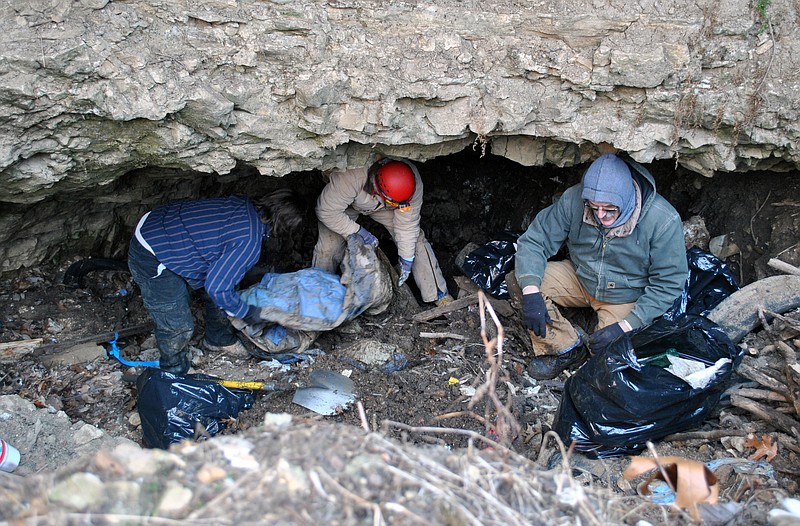 Volunteers dig out tires and trash at the entrance of the Goodwin Pit Cave.

CAMDENTON, Mo. - Despite harsh temperatures in the low 20s last weekend, cave enthusiasts from all over the state began cleaning up a pit that has been used as an illegal dumping site for generations. 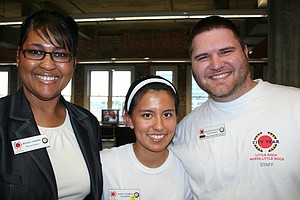 Just outside Montreal is Goodwin Sinkhole and Goodwin Pit Cave, which are two important karst resources in Laclede County that affect water quality at Ha Ha Tonka Spring and the Lake of the Ozarks.

According to Missouri Caves and Karst Conservancy (MCKC), Goodwin Sinkhole has been the site of illegal dumping, primarily of household goods and tires, since the late 1950s. The Missouri Department of Natural Resources has dye-traced the water from Goodwin Sinkhole, and verified that water that drains into Goodwin Sinkhole flows underground and emerges 10 miles away at Ha Ha Tonka Spring, one of the 15 largest springs in Missouri that discharges almost 50 million gallons per day into the Niangua Arm of the Lake of the Ozarks.

For many decades, trash and debris have prevented normal water flow at the sinkhole and has caused pollution at Ha Ha Tonka Spring and the Lake of the Ozarks, according to MCKC.

Frustration among the landowner and neighbors live who near Lancaster Road on Highway H, led to the MCKC taking on the project of cleaning up a 60-year accumulation of debris and managing Goodwin Sinkhole and Goodwin Pit Cave.

MCKC members - along with more than 30 volunteers from grottos, caving and civic organizations, area high schools, Boy Scout troops and members of several Missouri Master Naturalist chapters - gathered at the top of the sinkhole around 10 a.m. Feb 11. Bundled up in warm attire, volunteers listened to instructions from Klaus Leidenfrost, MCKC's president, about important safety issues of cleaning out this 20- to 30-foot deep pit.

The Goodwin cleanups have been divided into five phases and the estimated cost for the future work is close to $25,000. MCKC has agreed to fund most of the initial expenses, but is actively seeking donations and grants to defray expenses. MCKC has been notified of a grant award from the Missouri Department of Conservation's Wildlife Diversity Funds to assist with the project.

Volunteers dug and hauled trash on the surface of the sinkhole as part of the first phase of the cleanup last weekend. A mixture of volunteers came from the MCKC, Lake of the Ozarks Grotto, Springfield Plateau Grotto, Choteau Grotto, Kansas City Area Grotto, Meramec Valley Grotto, Meramec Valley Master Naturalists Chapter, students from Camdenton and Lebanon schools, and Boy Scouts of Overland Park, Kan.

Leidenfrost said MCKC's goal it to clean out the entire pit and then eventually reopen the cave.

"We think the cave goes a real long way," Leidenfrost said. "There are numerous caves in the area, and they may be linked. We won't know until we can get inside, but we'll find out."

The Grotto and Goodwin

Affiliated with the MCKC, the local Lake of the Ozarks Grotto Club has fully committed to aiding the Goodwin project with approximately 10-15 members devoted to partake in the cleanup.

Lake Ozarks Grotto, a not-for-profit organization dedicated to the preservation of caves and cave life, was established around the 1940s. In addition to facilitating the Goodwin project, the organization is currently locating all the caves in Morgan County.

Seven members initially visited the site Jan. 28 to start the cleanup. Members dug up large items such as used tires, a couch and several appliances. Since the sinkhole has been known to fill up with water, members tied the nearly 400 tires together in case of flooding. Leindenfrost said the DNR has agreed to pick up the tires.

Lake of the Ozarks Grotto Club president Ken Long said he was able to enter the cave and describes it as walking in a landfill. He said each side from floor to ceiling is mud, gravel and trash.

"At one time I would say that cave entrance ... was 30 feet long and probably 10 foot high at one time when the trash wasn't there," Long said. "Now it's a hole about 3 feet around and 7 feet down because of the trash."

Long also visited the site the previous weekend and "witched" the area around the cave. He said "witching" or "dowsing" is technique used for finding underground water and is performed by a person walking across the ground holding two copper rods bent in to a "L" shape. When the person walks over underground water, the rods turn outward or cross.

He said the water first runs through River Cave before it gets to Ha Ha Tonka Spring. River Cave is a hibernation habitat for bats in the wintertime, and it has endangered species such as the blind cavefish.

What excites Long most is the history of this cavern. He said rumor is it was used as a Civil War shelter and people used to take covered wagons into it. He was excited to start digging and opening up the cave to see the many tokens of history they might undercover.

Long, who has been caving for 30 years, said his determinations are simply put: "I always want to know what's around that next corner."

He and his fellow grotto members plan to help survey the cave along with the MCKC after the cleanup project is complete.

According to older photos of the sinkhole, there could be up to 5-10 feet of dirt and gravel, which is covering an unknown amount of tires and trash in the sinkhole. In addition, the MCKC has no idea how far back the trash goes into the cave.

Phase one and phase two of the cleanup are to gather up all the tires and other trash visible on the surface and remove them from the sinkhole.

Phase three will be digging up the gravel and bottom of the sinkhole to uncover all the buried tires and trash. Phase four will be collecting and removing all the remaining trash and tires from the sinkhole, and phase five will consist of installing a dirt beam next to Lancaster Road and erect an 8-foot fence to discourage future dumping. In addition, they will put up a sign to educate the public about how dumping in sinkholes negatively impacts the area's ground water.

Anyone who is interested in assisting with any of the phases of cleanup can contact Leidenfrost by e-mail at [email protected] or [email protected], by calling 573-341-7410 or by visiting MCKC's website at www.mocavesandkarst.org.

The Lake of the Ozarks Grotto has meetings each month and welcomes anyone who has an interest in caves. Their meetings are held at 7:30 p.m. on the second Tuesday of each month, April through November, at the Camden County Museum in Linn Creek.