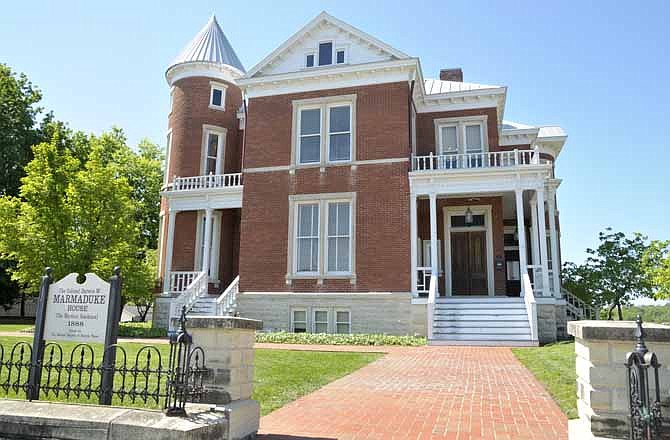 Convict labor formed bricks and carved limestone on site at the Missouri State Penitentiary to erect the warden's home at 700 E. Capitol Ave. in 1888.

The construction project cost the state $7,000, most of which went to acquiring the land along the prominent street across from the prison in Jefferson City.

"It was entirely a product of the state prison with all of its materials and work force coming from that institution," said the building's National Register of Historic Places nomination.

A newspaper article written just before the house's completion read: "This will be without a doubt the most substantially built residence in the state, and will vie in beauty at all points with the most stately mansions."

The late Victorian/Queen Anne design was the product of the well-known Fulton architect M. Fred Bell, though the Queen Anne appeal and the wide porches were added later.

Little has changed about the home's appearance since 1907.

Bell practiced architecture from 1869-1929, so it is possible he was involved in the modifications, too.

He is responsible for Fulton's Masonic Hall, the Old Callaway County Courthouse, the Palace Hotel, the public library, the Chicago and Alton railroad depot and at least two churches.

Bell also designed the State Hospital and Missouri School for the Deaf buildings in Fulton, as well as the Francis quadrangle on the University of Missouri-Columbia campus.

Col. Marmaduke, then, was the first warden to occupy the home upon its completion.

When the Department of Corrections became its own state department, the home became the director's residence. And later it housed administrative offices, according to Mark Schreiber's book, "Somewhere in Time."

The structure remained associated with the prison until July 1991.

Col. Darwin W. Marmaduke took up a business career in 1858 with his brother-in-law L.B. Harwood in hemp production, according to "Saint Louis: The Future City of the World."

The affects of the Civil War soon closed his lucrative business and instead of filing bankruptcy, he returned to his native Saline County to serve as sheriff briefly.

He served as cashier of the Branch Bank of the State of Missouri at Arrow Rock until the spring of 1865 when he took up farming. Sadly, his wife and two children died successively soon after.

"It has a prominence and influence, and reputation for enterprise and public-spiritedness worthy of the great city, and has business connections from Maine to Mexico," the 1875 book by Gray, Baker and Co. said.

Col. Marmaduke was described as "medium height, with large hazel eyes, which, in animation, light up and give the face a highly intelligent expression; this, with a prominent nose and large mouth, contributes to make a physiognomy that will attract attention at all times. Of a nervous, sanguine temperament, he is quick to think and likewise to act - this latter, however, is held somewhat in abeyance by a large development of caution which doubtless will continue to serve to steady and improve his judgment."

"His manner is dignified, easy and courteous, without possessing that geniality which readily assimilates and attracts each individual with whom he may come in contact. He is not a seeker after popularity, is eminently just in all intercourse with his fellowman, and does not hesitate to antagonize any interest which interrupts or hinders what he conceives to be a correct course of action."

The Marmaduke brothers were nephews to Claiborne Fox Jackson, who was Missouri governor at the start of the Civil War, according to an article by Gary Stevens for the Missouri Civil War Museum.

And their great-grandfather, John Breathitt, served as governor of Kentucky from 1832-1834, before dying in office.

John Marmaduke attended Harvard and Yale before graduating from the U.S. Military Academy at West Point. He then served in the U.S. Army, participating in actions against the Mormons in the West.

Gov. Marmaduke accepted a commission at the start of the Civil War as colonel in the pro-Confederate Missouri State Guard. But he left following the 1861 Battle of Boonville, where his ill-prepared confederates made a stand against Union Gen. Nathaniel Lyons' troops at the Battle of Boonville as Gov. Jackson and Maj. Gen. Sterling Price made their escape.

Then, he took a colonel's commission with the Confederate Army, leading troops in the 1862 Battle of Shiloh, where he was wounded, and many other Trans-Mississippi battles.

Gov. Marmaduke led to efforts into Missouri in 1863. And he led one of the three divisions in Maj. Gen. Sterling Price's 1864 raid into Missouri, placing him at the Battle of Pilot Knobb and the Battle of Westport - where he had three horses shout out from under him but was unharmed, Stevens said.

He was captured at the Battle of Mine Creek and promoted to major general while a prisoner of war at Johnson's Island in Ohio.

Before that, he killed Confederate Gen. Lucius "Marsh" Walker in a duel after Walker, a nephew of Pres. James Polk, after they exchanged accusations of cowardice and military misconduct.

After the war, Marmaduke worked in insurance and publishing. Then, he served on the Missouri Railway Commission from 1880-85, Stevens said.

Running as a Democrat, Marmaduke became the 25th governor and served from 1885-87, when he died of pneumonia while still in office and was buried in Woodland Cemetery.

As governor, he was able to settle railroad strikes and implement regulation of the railway industry.