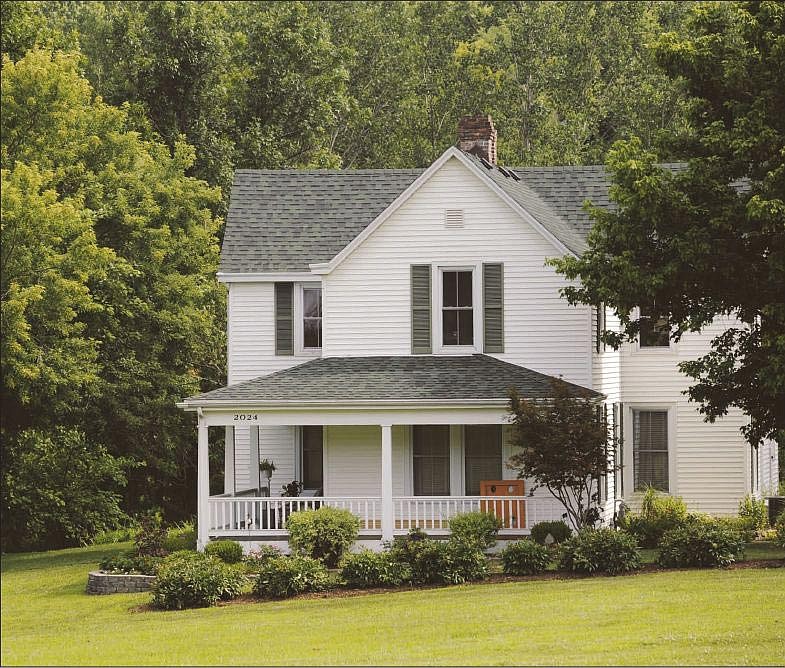 The Landwehr Dairy Farm in the 2000 block of East McCarty Street was named a city Landmark by the Historic Preservation Commission in May. Courtesy photo.

The white, wrap-around porch of the Landwehr Dairy Farm has been featured in many a family photo. Even owners Eric and Stacy Landwehr had their wedding photos taken there. For more than 100 years and five generations, the Landwehr family has called the farmhouse home, though the original 300-acre dairy farm has been altered with time, modernization, highways, zoning and residential development. 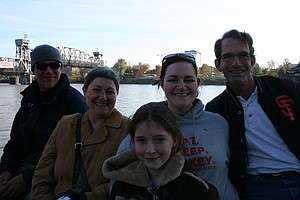 The distinctive property in the 2000 block of East McCarty Street was named a city Landmark by the Historic Preservation Commission in May.

"The Landwehr farm house has been preserved with great care and is an excellent example of early dairy farming architecture and culture," the Historic Preservation Commission's report said.

The original two-story farm house was built about 1880.

Of the once-necessary outbuildings, the milk parlor, smokehouse and springhouse still stand.

Originally outside the city limits, the farm became the site of Jefferson City's first dairy after Frederick and Theresa Landwehr moved their family and dairy livestock by train from Cincinnati, Ohio, in 1908.

Boggs Creek flows along the backside of the property, which was crucial for high volumes of milk production.

The first-generation Landwehrs quickly moved from selling milk to neighbors to selling to the Capitol City Dairy, owned by a group of investors including Frederick and Theresa's sons, Fred and Harry Landwehr. Later, the operation became the Landwehr Dairy, housed in the 300 block of Ash Street, where Prison Brews is today.

A springhouse initially kept the raw milk cool. Fearing for her grandchildren's safety, Mildred Landwehr had the stone building razed. However, her children unearthed and rebuilt the tiny, nostalgic structure in time for the family's 100th anniversary celebration in 2008.

In the 1940s, Frank Landwehr took over the dairy operation, continuing to supply the Landwehr Dairy, owned at the time by Louis Landwehr.

The dairy farm was a family operation until the 1960s, when city annexation plans combined with changing laws regarding dairy processing swayed Frank and his wife, Mildred, to subdivide their land for residential development.

Frank and Mildred Landwehr, Eric's grandparents, moved out in the 1980s. His cousin Theresa Landwehr Heckman and her husband, Bryan, lived there for a few years. Then Eric moved in after finishing college. And he and Stacy have made it their home the past 10 years.

Through the years, Stacy has heard more family stories about the property, and she has put her own touch into the landscape with shrubs and flower gardens. She also has adopted a long-standing tradition for the farmhouse kitchen - baking homemade bread.

With three boys of their own, Eric and Stacy continue the tradition of kids running around the home, Eric said his grandmother Mildred told him.

"We realize the significance of being here and carrying on the traditions," Eric said. "The opportunity and privilege to carry on that tradition is pretty neat."

The family has invested in the preservation and partial restoration of the nostalgic rural setting along a major city roadway.

And the smokehouse was totally disassembled and rebuilt from the foundation up, installing family-initialed bricks close to their original locations.

"The family wanted to keep that as it was," Eric said.

His great-grandparents' dining table and chairs with hutch and buffet and matching fruit paintings are on display at the Cole County Historical Society's Upschulte House.

When Eric's father, Carl Landwehr, grew up in the family home, he helped with chores and the dairy cattle like his siblings and generations before him. But by the time Eric came along, the cows were gone, he said.

"My earliest memory is a chicken coop ... and the creek was in a different spot," Eric said.

Frank, Eric's grandfather, had a tractor that he frequently found uses for, including turning up ground for a large vegetable garden, not only for his family but for neighbors who rented land there, too.

Although the formal baseball field his grandfather wanted to build never came to fruition, the spacious lawn has been used for many sporting and recreational activities over the years.

Eric and Stacy have hosted soccer practices for their children's teams, when fields weren't available. And there's plenty of room for their go-carts, golf swings and kickball games.