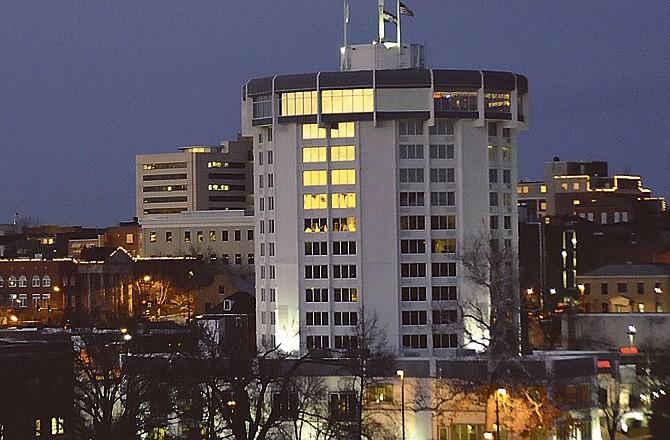 The Doubletree Hotel, with its distinctive round architectural design, is January 2011's Jefferson City Landmark.

Across the downtown skyline, only the Capitol stands taller than the Doubletree Hotel by Hilton - Jefferson City.

The distinctive, round design has caught the attention of visitors and residents alike for more than 40 years.

It also caught the imagination of the future as one of the first designs by T.Y. Lin using clear spanning concrete techniques.

Since being extensively renovated, the visual icon has been open again since May 2008.

"It's a historical landmark," Puri said. "You had this iconic product in Jefferson City, but it had deteriorated over time. We've restored it to its prominence and retained its character."

The family-owned business built their Hampton Inn in 1998 and soon noticed the then Monroe Plaza, waiting for opportunity to step in as owner. They bought the towering building in 2005 and closed it for the restoration in November 2006.

"We didn't know the extent of the damage from the inefficiency," though, Puri said. "This was an extensive commitment."

Despite the renovations demanding more than they originally had anticipated, the unique view and luxurious appointments were restored.

Using a green perspective, Vinca Enterprises replaced nearly everything from electric and technology wiring to plumbing and environmental controls. Even the exterior was renewed.

"But we retained the quality of the building's character," Puri said. "We did not do drastic changes but it needed updates."

The late Tung-Yen Lin, a professor of civil engineering at the University of California- Berkeley, was the architect.

While waiting to hear back from Lin's architectural firm on their request for a set of blueprints, Vinca Enterprises discovered original plans inside the building, Puri said.

"There are only eight other buildings like this in the U.S.," Puri said enthusiastically. "We have one of his buildings in Jefferson City."

The refurbished hotel has been featured in Hilton's development magazine as an example of historical reuse.

"This is how the old can be combined with the new, made energy efficient, and bring in a new age," Puri said. "Our goal was to show not "out with the old, in with the new,' but that history and growth into the future can be hand-in-hand."

The hotel was named a city Landmark in 2008. But their application for nomination to the National Register of Historic Places was not approved at the state level.

Built in 1967, the building still is comparatively young.

When it opened in 1969 as part of the Holiday Inn chain, only the Capitol stood taller.

It was a piece of magnificence; a sign that Jefferson City was looking to the next century, Puri said.

"Now people are starting to return to that grandeur," he said. "It reminds us of when it was the glory and the crown jewel of the city."

The restaurant atop the 13-story circular hotel has been stage to many Capital City experiences.

Many a lawyer has stood at the north-facing window to have his photo made with the state government architectural background on the day he was sworn in at the Supreme Court building.

And it was site to legislative meetings and campaign announcements over the years.

"Many things happened here," Puri said. "That reflects on this community and it affects our state.

Many visitors to the city have been drawn to the building for its view and for its unusual appearance, too.

"This is an attraction, just to see the view," Puri said.

Patrons and city leaders have complimented the results of Vinca Enterprises' investment.

"That's a great feeling that can't be topped - especially when it comes from someone who really cares like we do," Puri said.