State Street buildings all that remain of 1800s female seminary 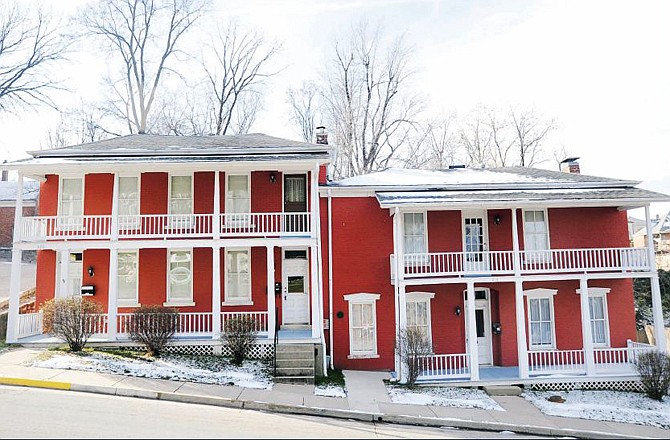 The Green Revival-style building at East State Street was formerly the Jefferson Female Seminary that was saved from demolition in the late 1990s.

Once a place to educate young women in the finer points of knowledge and etiquette, today the Greek Revival-style buildings at 416-420 E. State St. are a reference for those learning about revitalization.

Named to the National Register of Historic Places in 1999 and as a Jefferson City Landmark in 2003, the Jefferson Female Seminary was saved from demolition in the late 1990s and now houses four versatile office/ residential units.

With a view of the Missouri River and located on one of the city's original streets between downtown and the Missouri State Penitentiary, the two-story brick Landmark represents both the city's early architectural history and the pursuit of higher knowledge before public education.

In the same year Jefferson City became the seat of Cole County government - 1829 - sites were designated for both the seminary and the penitentiary.

The first historical reference to the "Jefferson Female" school came in a 1838 letter to the editor from a student, who studied in a two-room log building on Water Street, which is today's State Street.

A more permanent building for the Jefferson Female Seminary was built in about 1857.

In 1858, a news paper report accounted for more than 100 students under the care of the Rev. Lougheed at the Jefferson City Female College, which had a reputation for excellence, scholarship and careful training. At that time, it was not uncommon for one schoolmaster to be responsible for that number of pupils.

The main building of the Jefferson Female Seminary was Lindell Hall, a 12-room, three-story brick building, shown in a bird's-eye view photo from 1869 at the corner of what are now Jackson and State streets.

But by the time of that photograph, the seminary had been sold twice on the county courthouse steps for non-payment of debts.

During the Civil War, many schools in the state were closed. Even the office State Superintendent of Public Schools, established in 1853, was abolished in 1861. And following the war, teachers who had been sympathetic to the South were barred from the classroom.

By 1870, local public school enrollment neared 600 and a second school building - more modern than the Jefferson Female Seminary - at the corner of Miller and Monroe streets was under construction.

The seminary continued to change hands frequently among educators.

In 1884, a new owner announced the addition of a boarding hall, presumably 416 E. State St.

Unfortunately, fire destroyed Lindell Hall in March 1885 and that new building then housed the classrooms.

The 420 E. State St. building is first found on the 1898 Sanborn Map. But the last efforts would not prevail for the private school.

"These buildings are among the few surviving properties that represent the academy/seminary level of education in Missouri," the national register nomination said. "Architecturally, their grace and simplicity evoke images of early institutions of higher learning in Southern states."